These Newborns Have Been Dressed up as Mr. Rogers to Celebrate World Kindness Day | 22 Words 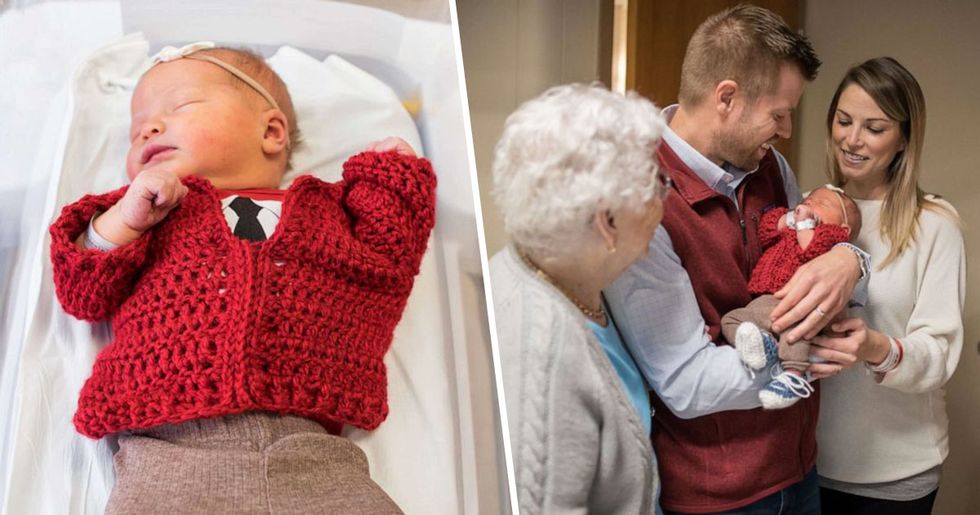 These Newborns Have Been Dressed up as Mr. Rogers to Celebrate World Kindness Day

Fred Rogers delivered a simple message to the kids of America during his daily half-hour educational program, Mr. Rogers' Neighborhood.

His message was this: be kind to each other.

This ideology of neighborly kindness is something that still captures the imagination of us Americans. As made clear by the folks down at Pittsburgh's UPMC Magee-Women's Hospital...

Just wait until you get a load of these adorable costumes!

The knitted cardigan, shirt, and tie... that was Mr. Rogers alright.

Mr. Rogers tuned in with Americans with his half an hour broadcast every weekday for thirty-three years.

He captured audiences and guests alike with his positivity and lust for life. Every day you could tune in to watch him singing songs, playing with puppets, painting pictures and meeting new people.

Even though he died in 2003 after battling stomach cancer, it's clear that his legacy is still going strong and the entertainer's beliefs continue to be heard.

Fred really did have a way with words.

Mr. Rogers believed in the power of kindness...

He wasn't wrong. If everyone was more kind, the word really would be a better place.

Won't you jump on the Neighbourhood trolley?

All kinds of people were influenced by Fred, and those that grew up watching him carried their love of him, and his show, into adulthood.

Fred taught us about the simple joys in life.

Mr. Rogers taught American kids that you didn't always have to be the best at something, that taking part is what counts.

Mr. Rogers had a famous saying, "Won't you be my neighbor?" By this, he hoped to break down the idea of social, racial and religious differences. He made the point that we are all neighbors and should be kind to all.

Tom Hanks is set to star as Mr. Rogers.

The movie inspired by Frank Rogers' life, A Beautiful Day in the Neighbourhood is expected to be released very soon.

Rogers' kind nature is being celebrated across America on World Kindness Day.

People across the country are embracing the red cardigan...

One of the staff nurses, Caitlin Pechin knitted Mr. Rogers costumes for all the newborns that were born on World Kindness Day.

The knitted costumes featured Mr. Rogers' iconic red cardigan, along with brown trousers, a shirt, and a tie.

It must have taken Caitlin Pechin forever to knit all the outfits.

Not that the nurse seems to mind. When asked about the project by ABC news she said: "I really enjoy making things for all the babies because they look so cute in them."

Since the photos of the "Mr. Rogers" babies went viral, praise has flooded in for the initiative to spread the message of kindness and goodwill to all neighbors.

The hospital surprised Joanne Rogers. She had no idea that the babies she was visiting would be dressed like her late husband. On meeting the newborns she said it was "really special."

What a beautiful serenade to Mrs. Rogers at UPMC Magee this morning celebrating the legacy of #MisterRogers univers… https://t.co/GRmff6uZm1
— UPMC (@UPMC)1573687576.0

A Beautiful Day in the Neighbourhood will be in theatres very soon.

The highly anticipated Tom Hanks, Mr. Rogers' movie will be released across the U.S. as of November 22nd.

Let's keep the kind spirit of Mr. Rogers alive! Continue scrolling to read the Mr. Rogers moment that made Tom Hanks bawl his eyes out...