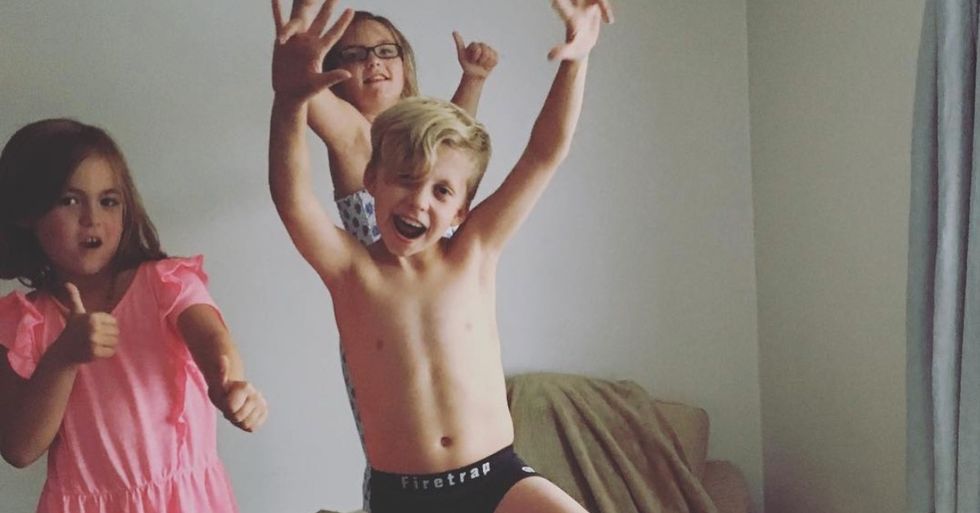 Internet derision aside, in real life, most of us try not to cast judgment. We're all just doing our best. We have good moments and bad, and unfortunately, some of those bad ones happen in public. But even the most open-minded among us are struggling with a new British reality show.

Feral Families is a new British TV show that follows three families as they "radically unschool" their children.

Radically unschool? In case you haven't heard of this, unschooling is like homeschooling, except the school part. While homeschoolers follow a curriculum, use lesson plans, and teach the fundamentals of reading, writing, mathematics, science, history, etc, unschoolers do none of that. Kids (or parents) don't feel like math today? No problem. The "education" is child-led and entirely unstructured. There is no curriculum or lesson plan.

The "radical" part comes in when this kid-led concept permeates all aspects of the family's life.

Their "school day" has no structure, and neither does any other aspect of their day. Or night. The children eat what they want to when they want to. Mealtimes and schedules are for conventional people. These kids choose their own bedtimes and have no rules to follow. (Conventional parents everywhere just broke out in hives at the thought of no bedtime.)

In case you're still feeling confused about this concept, these are the families included in the show Feral Families.

Maybe that looks nice? The kids seem happy. Except the one who lit himself on fire, it doesn't seem that dangerous. (There is some uncertainty about whether that fire-wielding teenager can read.)

Gemma Rawnsley, mom of seven kids ranging in age from 1 to 13, considers parents to be "facilitators."

Rawnsley explains, “Right from the off, we felt really strongly that we didn’t want to be the sort of parents you see shouting at their kids in the supermarket." Most parents don't go into parenting hoping to be shouting in the supermarket, but parenting takes place wherever the children are, and supermarkets happen. She goes on to explain how she sees her role, “We are facilitators, so we will lift the mattresses for them. The conventional response would be to say: ‘No, you can’t take the mattresses and make a slide,’ but why not?" (Are we the only ones thinking that a reason "why not" is that we don't want to lift the mattresses?) For the Rawnsley brood, there are only two rules: no lying, and no hurting one another. Outside of that, pickaxes, midnight snacks, tattoos, swearing, head-shaving: all fair game.

Is the idea of letting the children make their own choices really that crazy?

People seem to be split on the answer to that. Most agree that freedom to explore, discover, and make mistakes is good, but kids need some limits too. The public's reactions to the show are varied. Some support the families, some vehemently oppose the concept. Many homeschoolers are especially upset. Whatever the opinion, the opinions were strong.

The most common reaction from viewers is that this this a ridiculous parenting choice.

In fact, it doesn't feel much like a parenting choice at all. More like unparenting. The parents were called out as lazy, selfish, and worse. In one clip from the show, small children are serving themselves ice cream and popsicles in the middle of the night — no need to ask for permission or for help, as these kids have no restrictions on what they can or can't do. Of course the kids are up to all hours and eating junk food! They are not going to self-regulate or choose healthy snacks. For most people watching the show, it's difficult to see kids without any restrictions. We're so accustomed to setting limits and boundaries, sticking to mealtimes and bedtimes.

Many people wondered how this is legal. School, or at least a structured education, is compulsory, right?

We try to have an open mind, but when we see a 13-year-old reading at the level of a 6- or 7-year-old, it's hard not to judge. Are the parents neglecting their kids' basic needs? How will this turn out for them in the end? In Archie's case, his father and grandparents are not on board with unschooling at all. In fact, his grandfather has arranged a private tutor to teach Archie basic literacy skills.

The parents on the show rail against how they are judged by closed-minded people, but then they turn around and do a fair amount of judging themselves.

What a disgusting thing to tell your kids, that other children go to school because their parents don't want to care for them #FeralFamilies
— Michelle 💙 (@Michelle 💙)1509049937.0

One episode shows a family enjoying time in the playground while school bells ring in the background, signaling the start of the school day for most children in the neighborhood. The mom describes school as a prison where children are "penned in." Why would other parents send their children off to such a terrible fate? Because they don't care, and don't want to take care of them, is the implication.

In one episode, siblings Skye (13) and Finlay (12) decide that they want to try going to school.

Gemma, their mother, supports their choice, but not really. While she allows them to do a three-day trial, her subtext to her kids is that school is bad, restrictive, and even weird. Finlay is excited to buy a school uniform and Gemma can't stop talking about how restrictive the blazer is, how terrible it is that the kids are forced to wear it, and how kids even have to ask permission to go to the bathroom while in school. The children, who are excited and nervous, are surely picking up on their mom's loud and clear message that school is a bad place for children. When the kids return home after their first day, Gemma calls them aliens. Unsurprisingly, in what may be the biggest disappointment for viewers of the show, both kids decide school is not for them.

But not all the responses to the show are negative.

Many criticising #FeralFamilies yet Finley and Skye come across eloquent, polite, smart, happy, self sufficient, healthy shall I carry on?
— Emily Beatrice (@Emily Beatrice)1509073345.0

The children, for the most part, do seem like great people. Skye and Finlay in particular are articulate and bright. This is likely why it was such a blow to the audience when they decided not to continue in school. Finlay especially seemed excited about it. He likes structure and routine. He's often seen folding and putting away his clothes, and talking about craving social interactions with other kids. Viewers were hopeful when he went off to school, but instead of any encouragement from his mother, he only received thinly veiled disappointment, and he buckled. Some of the harshest critics of the show come from the homeschooling community...

Most home-school families follow a curriculum and work hard to provide age-appropriate learning materials and support.

I work so hard on my son's home education. Then #FeralFamilies come along and throw all home educators under the bus for a little fame.
— DarcyBee (@DarcyBee)1509055086.0

Homeschooling is not the same as unschooling at all. But homeschoolers in the UK are now concerned that they're being lumped together with these "feral families."

Families who choose to homeschool have always faced criticism and judgment.

Generally, people don't understand what homeschooling really entails. That perception was slowly changing as more and more "normal" families took this route. People who work hard to provide an education for their children are understandably upset to be grouped with these radical unschoolers.

With the spotlight on these families and their unschooling, unparenting ways, people are bound to misunderstand home education.

The word feckless is definitely not used enough. The criticisms of these families came in fast and furious and from all angles. Some people focused on the lack of rules, some on the lack of any apparent education, and some on the future burden to society that these children may (or may not) become. The families in the show talk a lot about allowing their children to make their own choices, but can kids really make an informed choice about being on a reality TV show which thrusts them into the center of a controversy like this? Is any of this fair to the kids?

It's easy to sit in judgment of these families, but that's not the whole story.

We may not agree with their parenting choices, but are they really making those decisions for the wrong reasons? Is it really laziness? Or are they just deeply caring, and — like the rest of us — trying to do their best? Watching the show, it's clearly the latter. But does that make it OK?

Calling the families and children "feral" brings its own problems.

Terrible that these families are being classed as feral- they are articulate & speak a lot of sense about our world now #FeralFamilies
— Nicola CK (@Nicola CK)1509050401.0

These families are certainly making different choices than most of us, and we may think they are dead wrong, but the kids are innocent in all of this. Perhaps the worst decision these parents made was to participate in the show.