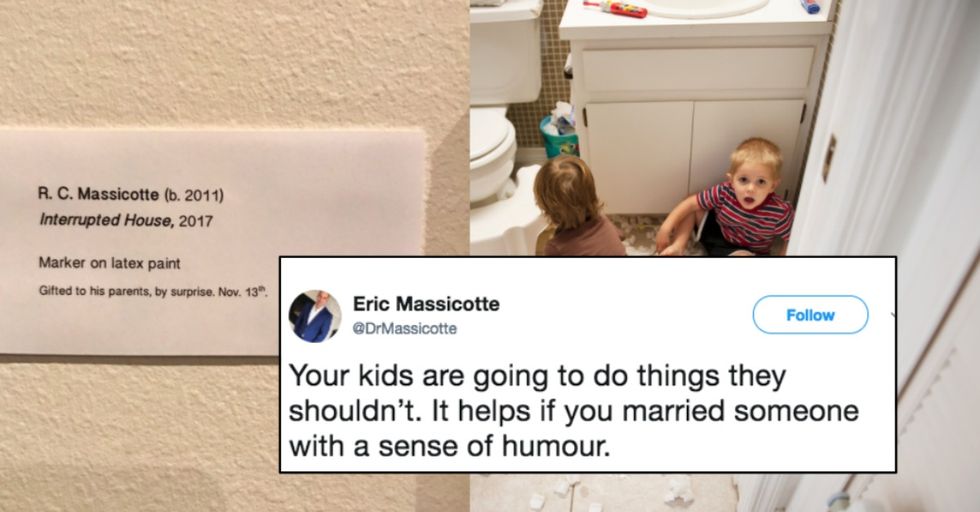 Every kid has scribbled all over something that they were definitely NOT supposed to touch at least once. There's some unknown force that draws little hands with a permanent marker to the most expensive surface in the room. And while a permanent marker and expensive object are already touching, it would be remiss not to go ahead and complete a masterpiece.

This is an unspoken rule known by all children.

One set of parents went viral after they chose to deal with this phenomenon in a hilariously clever way when they caught their kid in the act.

There's a lot of things that can go wrong when you live with small humans.

For example, there's a lot of poop. Just a lot more poop to deal with. Poops unflushed in the toilet, for example. Also, what happened here? What's going on with the doer of the crime?

If you're able to keep your house clean with children, are you a superhero?

Because, seriously, there's so much that can go wrong. Mostly potty stuff, though.

Why are you upset that we cut up all of your bills? They look so pretty on our tiny recreation of Mount Rushmore! Aren't you proud?

Sometimes parents just have got to improvise.

"If I didn't care, my bathroom would smell like pee instead of flowers and pee" is a phrase that we would like embroidered on a doily that we can hang on our bathroom wall, please and thank you.

If anything, parenting has got to teach you how to make the best of situations.

It's also a prime incubator for humor. This post is captioned, "Also it goes great with vodka, so there's that. ???#lemonadeFTW". We're 100% here for this kind of innovation. Click through to the next page to see a great example of this kind of parental brillance.

One Toronto mom caught her son in the act of drawing a lovely little house on the wall.

Her husband documented what she did with the 'art piece' on Twitter and the result has gotten over 95,000 retweets and 250,000 likes.

She took the vandalism in stride and made it look like part of a peculiar museum.

Her husband, Dr. Eric Massciotte, captioned the tweet, "Your kids are going to do things they shouldn’t. It helps if you married someone with a sense of humour."

She even gave the masterpiece an appropriate title: "Interrupted House."

People were impressed with Mrs. Massicotte's commitment to her joke and added similar tales of their own. Another doctor replied to Massicotte's tweet and said, "Tell him Mr Loch is impressed and may have some walls he can work on."

Parents could definitely relate to this incident.

@DrMassicotte @maitelsadany Wish we'd framed this back in 2013. My better half painted over it for me, his heart wa… https://t.co/XxUcATSUpR
— Shannon Reynolds (@Shannon Reynolds)1510781839.0

This parent wished they'd thought to frame this well-meaning vandal's work back in the day. Other parents weighed in with their own experiences. Twitter user @dhcammel said, "Yeah. It was cute and all when our daughter, at age 3, demonstrated her superhuman intelligence by writing her name on the side of her mom's truck. . . with a sharp rock." "Just had a similar experience. My kid decided to use his new sled to go down stairs with metal stripping. Scared him shitless. After I gave him a fist pound for his courage I told him it was pretty dumb thing to do." wrote Twitter user @ediddy999.

But this couple just wanted to experience the beauty of the artwork itself.

Twitter user @laylainlalaland posted some hilarious commentary her boyfriend wrote on the drawing after she sent him the viral tweet. He wrote, "I quite enjoy the almost abstract element that the young artist going for there... It really brings home the point that behind what appear to be solid and firm family foundations, cracks do indeed show through if one looks carefully enough... and those foundations no longer seem quite as firm. Inspiring work, yes. Profoundly moving." He concluded, "And do we feel that the roof gabel almost harking on ancient imagery of spearheads is a direct reference to the natural war between personalities that family life always feels like?" Unnerving, yes. Hilarious, also yes. Someone replied to the conversation, "Marry him." Laylas response?: "Don't worry I f*cking plan to."