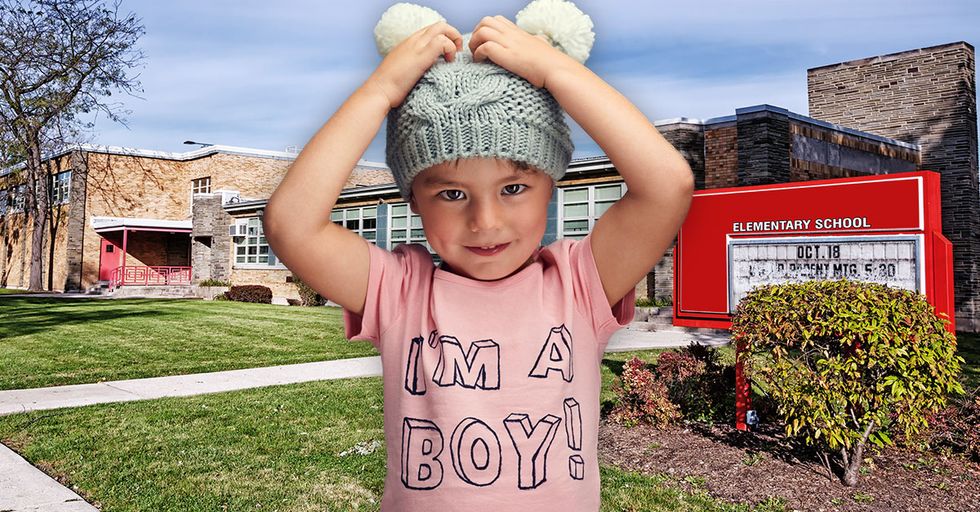 Nigel and Sally Rowe are self-described Christians, so, when another child at their son's school in the UK asked to be accepted as transgender, they decided to remove their boy from school. They've since decided to educate their six-year-old son at their home on the Isle of Wight.

Then, they went on a media tour to prove that what they did wasn't bigoted.

Unfortunately for them, they're on the wrong side of history, and Twitter didn't hesitate to let them know.

The Rowes are very worried about their child being "confused."

Of course, children are usually always confused, since the world, and everything in it, is new to them. But Nigel and Sally have decided that a child being confused is a wholly bad and damaging thing. Because it forces them to explain things they don't want to.

This is because a boy in his class sometimes wore a dress. This was too much for this family to handle. So, instead of explaining that everyone has the choice to dress how they feel most comfortable, or opening up a conversation about gender with their child, they shut down.

Out of concern for their apparently overwhelmed child, they decided to rip him out of school and educate him at home.

Then, they went on a completely unnecessary media tour. Because if your child has difficulty understanding that boys can wear dresses, surely they will be comforted by a barrage of reporters descending upon your family.

Now they could educate their son in the privacy of their home.

A place where, one can assume, their children will never be challenged or confused by the existence of people different from them. And where we can also assume they aren't allowed to have anything pink. Because of how confusing that would be. We'd hate for someone to forget what their gender is by forgetting to clearly label it.

Noting that having to explain things to your children is generally difficult. And if anything deserves to be easy and scare-free, it's being solely responsible for educating and caring for a small, vulnerable human child. It's TV's job to explain things to them, after all. And it didn't end there...

Some agreed with the father's assertion that 6 year olds are just too stupid to understand gender.

Apparently some kids just can't handle their male classmates deciding to wear dresses. Which is weird since they've only been on this Earth for 6 years and are less used to gender norms than adults even are. But just in case, be sure to keep your 6 year old away from any Scottish weddings, or photos of the Pope.

But some Twitter users pointed out that sheltering kids from the existence of other people was a little silly.

What a novel concept, treating people respectfully. Especially when it seems way easier to just withdraw your kid from school and then create a media circus condemning another 6 year old for expressing himself.

Trans people themselves also spoke up about the idea that 6 years old is "too young."

Which is amazing, because what 6 year olds should be doing is watching movies about getting married, or skinning dalmatian puppies to make a fur coat, or for the Christian kids, that story about how God drowned everyone but Noah and his family because he wanted a do-over. You know, totally non-confusing, simple concepts for fragile children who can't understand much. (But be careful, in some Bible illustrations it can look like Noah is wearing a dress. You'll want to censor that part.)

Of course, at the end of the day, this is just a really sad story.

About a kid being denied the opportunity to learn about things his parents don't want him to understand, because it's a threat to their lifestyle.

A lifestyle that seems driven more by fear and hatred than love.

Because let's not forget, there is more than one 6 year old in this story. There's also a 6 year old who is also probably feeling a little confused right now, because adults are going on the news accusing him of being a problem.

And it's a little hard to see what benefit it does to punish kids for wearing clothes.

But hey, maybe Nigel Rowe owns a lot of stock in a trouser company. More than likely though, this is just a sad case of intolerance overshadowing an opportunity for everyone to learn.