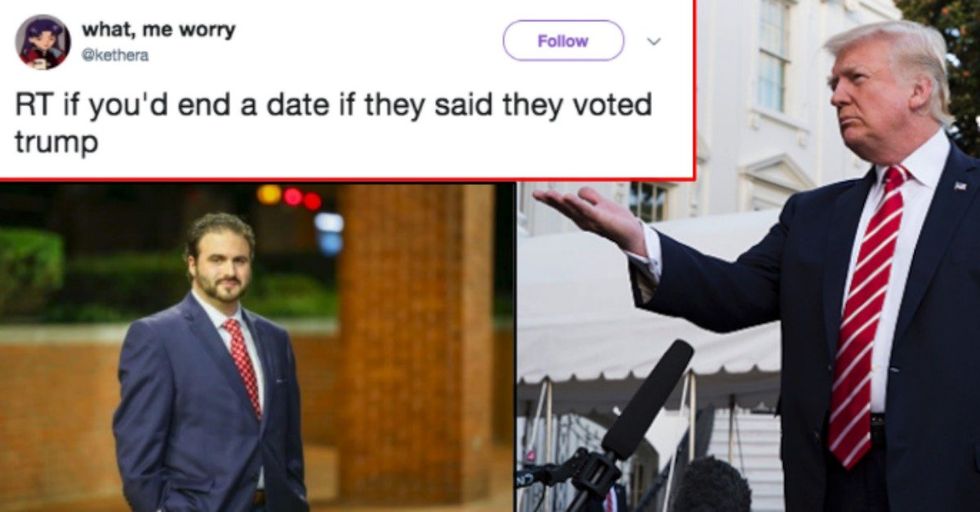 The 2016 U.S. election was especially divisive. Families fought over political affiliation and presidential choices like never before. Voting became a touchy topic among colleagues, friends, and acquaintances alike. It's becoming apparent that it's bleeding into our dating lives as well.

While politics used to simply be a topic of conversation, it seems that political affiliation has become a deal-breaker for many single people in the dating realm.

Anna Orso wrote a story detailing the ways that dating coaches and experts have said that political affiliation is becoming more of an important issue for bachelors and bachelorettes this year.

In the article, Anna told the story of one particular man who went on three dates with a woman whom he met online. On the third date, he revealed that he voted for Trump. He was the Treasurer of the Philadelphia Young Republicans, in fact. When he told her his choice for president, his date promptly got up and left. Whether or not one would do the same became a contentious issue when the story hit Twitter.

After Camera Boy Mike tweeted a screenshot of Anna's article, Twitter user @kethera retweeted it with this message.

She asked people to retweet her tweet if they would end a date if the person said they had voted for Trump. The tweet now has over 149,000 retweets.

People didn't just retweet it, but added lots of commentary on their decisions, either for against leaving the date.

Nick Morgan said he would leave without even packing up the free breadsticks for a snack later. Some people thought it would be smarter to take those breadsticks and enjoy them himself, though.

It seems that most people wouldn't have had an issue with their hypothetical date being conservative or republican.

@MikeDarnay Seems pretty fair to me, conservatism is one thing but Trump? Would walk out on a girl the same way.
— Mitchell Bennett (@Mitchell Bennett)1510069768.0

Most people said their issue was with their hypothetical date picking Trump as their specific candidate. Most of the replies say that they would not be okay dating someone who supports [Trump] a person who doesn't care for their wellbeing.

They couldn't stand someone who would support or allow a racist, misogynist, xenophobic, selfish person to run the country.

It had to do with different personalities, but it also had a lot to do with the values behind particular political choices. It's not the same as voting for tax cuts or benefits. It seems that her point is not that all Trump supporters are racists and misogynists. The point is that they supported a racist and misogynist by voting for Trump.

During the 2016 election, Trump made it clear that he didn't care about women and minorities.

So, if you're a woman or a minority, or you have friends who are women and/or minorities, and you care about their wellbeing, saying, "I think we're different people," is a pretty polite way to turn down someone who doesn't care about minorities' human rights.

Some people shared other (unrelated) surprises they had learned upon meeting someone for a blind date.

Brenda continued, "Well, he also told a friend of mine that he liked history but, there’s so much we don’t know because of all the history we lost in the “great flood".

This person reminisced about a time when a contestant from Real World: New York turned down a date for being a Bush supporter.

Some people would have dumped a person with a different political ideology quickly–no matter what–because of their personalities. But it seems that people who are not a decisive as the second person in this post are becoming more solidified in their decisions to or not to date someone of who voted for a different presidential candidate.

People had all kinds of suggestions for the girl that left Bryan at the dinner table.

Amanda Whitcomb replied, "I need to have some of those printed and hand them out to family members. Maybe I'll put them in HOLIDAY cards."

Lots of people strict guidelines about what they can accept in a romantic partner–politics aside.

Jokes aside, some people had good points about the power of sharing opinions and debating over disagreements instead of immediately dismissing a person with a different opinion.

While it's totally valid that the woman didn't want to date the man and didn't owe him any of her time, she may have helped to change his opinions had she stayed at the table and had an interesting debate about each of their political choices. It's not her responsibility to educate him. But, dating aside, we all might get a little more done if we talked to each other more about our disagreements instead of blocking each other on Facebook.