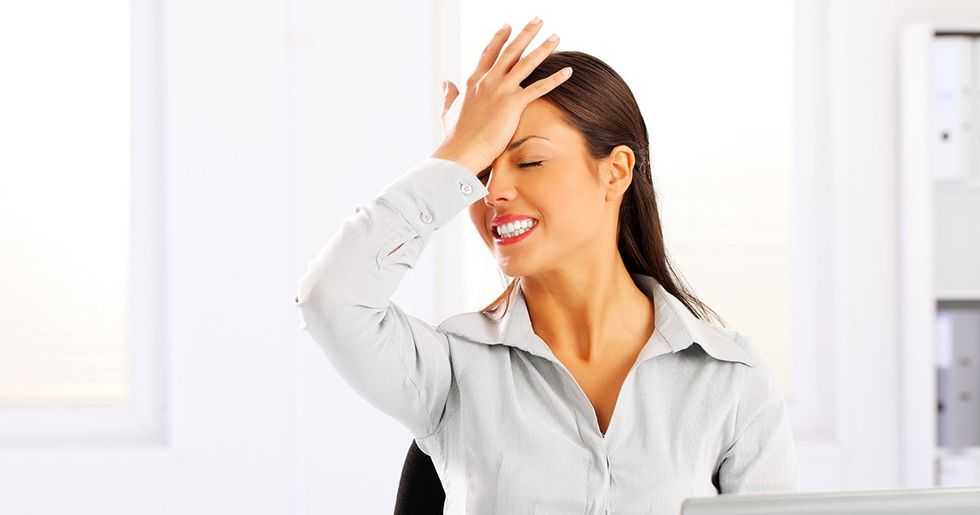 These People Forgetting Their Words Will Absolutely Make Your Day

There are, like, a lot of words. So many. Definitely more than any one person could possibly hold in their head at one time.

One time, I was making the bed with my husband and couldn't remember the word "pillowcase." Rather than just pointing or saying "the pillow thing," my brain instead decided to spit out the word "shootcake." Which is actually not a word. It's complete nonsense. Still, it was so funny that we still refer to pillowcases as "shootcakes" to this day.

Recently, someone started a Twitter thread sharing examples of them forgetting very common words along with the very entertaining alternative words they came up with instead. The responses are so good.

It all started when physicist Paul Coxon shared that he had forgotten the word for "photon."

Obviously, most of us don't use the word "photon" very much in our everyday lives, but you can see why Coxon would. Personally, I'm a big fan of "shiny crumb."

Coxon's tweet quickly took off. He shared this brilliant follow-up when it did:

Why did we not name thunderstorms "soundclouds" in the first place? Seems like a real missed opportunity.

Other people in academia began sharing their own examples of forgetting words:

It's nice to know that even some of the smartest people on the planet suffer from a good old-fashioned brain fart every now and again. It makes me feel better, anyway.

This person forgot the word for "trowel":

This is just embarrassing:

@DrSueOosthuizen @paulcoxon Hello my name is Ken. I have a PhD in geophysics and thanks to a random brain freeze fo… https://t.co/CBJzLPfynz
— Ken Hamilton (@Ken Hamilton)1550525295.0

On the one hand, at least you didn't forget the word for something you use every single day in your career. On the other hand, forgetting your long-time colleague's name might actually be worse.

But it's nowhere near as bad as this one:

Yeah, I might have called a pillowcase a "shootcake," but at least I've always known my husband's name. So far, at least.

At least "I'm good at saying things" is grammatically correct! It could have been way worse. You could have said something like, "I word good."

This person joined the discussion with further crumb names.

Of course, this type of brain freeze isn't limited to members of academia:

"Horseling" is so good. I don't think I'll ever hear of a better name for a baby horse.

This person literally forgot the word for "table."

I didn't even realize that was possible. I'm sure they bring a lot of other skills to the flat surface with legs, though.

And, of course, pregnancy brain is totally a thing:

I can so easily imagine this woman getting more and more frustrated at her inability to pull the word "banana" out of her brain. I hope she got it eventually!

I guess a baguette is rather torpedo-shaped. This is still pretty wacky, though.

If you're a teacher and you make a mistake, you have two options. Immediately correct yourself and hope your students move on to the next topic, or double down and invent a new phrase for the word "rocket."

This is way too fancy for my blood. I'm glad we actually have the word "weekend."

This one made me laugh out loud:

@paulcoxon One of my cleverest and most fabulous friends at university (now PhD in neuroscience) once forgot the wo… https://t.co/IspB5YS8Tx
— Wesley Mallin (@Wesley Mallin)1550527867.0

@paulcoxon I once forgot the name for a urinal when trying to tell a staff member in the resturant I was in that th… https://t.co/btexTqZ85r
— Colin Stewart (@Colin Stewart)1550518150.0

What hand gestures were you using, exactly?

How do we get "scholeagues" to be accepted as an official part of the vernacular? That portmanteau is way too good to pass up.

@paulcoxon Reminds me of my two year old daughter explaining a hot dog to me as a "meat pickle"
— Alistair Dove (@Alistair Dove)1550516033.0

Is it pickle-shaped? Yes. Is it made of meat? Also yes. But "meat pickle"? I just can't follow you down that path.

Have you ever forgotten the word "fork"?

@paulcoxon Not in the same delightful league, but in the final throes of writing SATC, I forgot the word 'fork' whi… https://t.co/dEbsSoyg7r
— Laurie Winkless (@Laurie Winkless)1550542615.0

I'm pretty sure she was talking about a dinglehopper. I forget that word sometimes, too.

This one made me cringe:

You know they were talking about self-deprecating humor. Self-defecating humor is...something else entirely.

We need to adopt this terminology:

Can we just have children name everything from now on? I can't see any way that could go wrong.

Yes! Three cheers for "science blazer"! That is my new favorite thing.

You're not technically wrong.

This one is along the same lines as "hot box."

Hot refrigerator. Makes sense to me! (So does "foot wrist," BTW.)

Heroes in a half lid.

@paulcoxon I have a doctorate in nursing practice and I had to tell my family about the turtle that I saved on the… https://t.co/HA0tqb1AQn
— Aimee Burch (@Aimee Burch)1550596451.0

"Lid" makes it seem like you're going to open up the turtle and eat whatever is inside it. Just me?

How do you forget the word "pants"?!

I don't know how anyone could forget the word "pants," but I admire the speed with which they came up with "shirts but for your legs." It's so evocative, no?

Remember when I said "horseling" was my favorite word for a baby horse?

Please tell me you brought some lasagna with you. Please. I need this.

@paulcoxon Hello, I am a librarian and thanks to a random brain freeze I forgot the word for book and said to a new… https://t.co/1VlomHTjkl
— Beth Dunston (@Beth Dunston)1550543851.0

Hey, it's true. My library has a great selection of thingies, too! Share this with someone who always has the funniest brain farts!