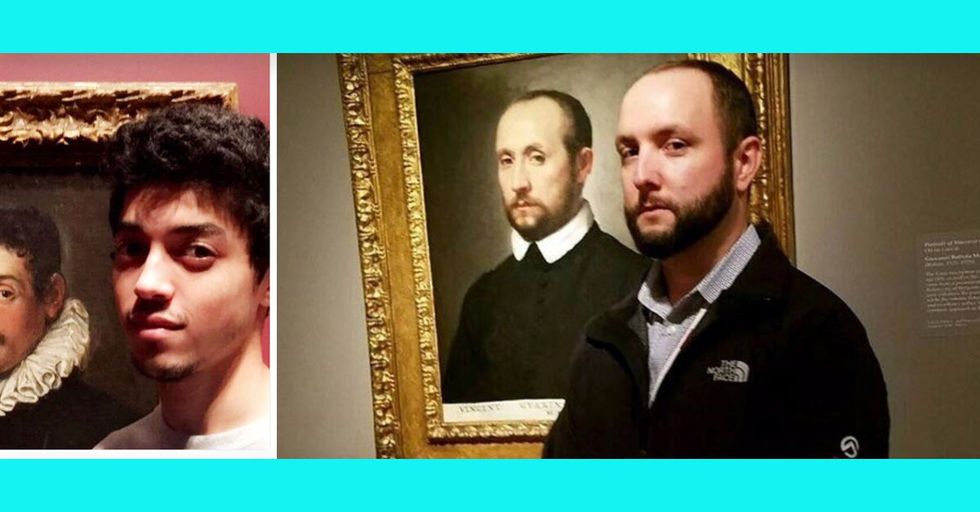 Do you know what a doppelgänger is?

No, it's not just the creepy shadow in horror movies that follow you around. Most of the time, it's simply another person, or thing, that closely resembles you.

Jesus, for instance, has several doppelgängers, including a few found in sandwiches. Nothing like a bit of holy ham and swiss to start the day, as they say.

Okay, maybe that was a bad joke, but the fact remains; many people search years in the hopes of finding their very own doppelgänger. A lucky few have found them on museum walls, and they've posted them so we all can enjoy.

First up is Weird Al Yankovic...

At least we're sure it's him. If not, what an uncanny resemblance. Oh, and the doppelgänger's cool too.

We have to say, it's pretty darn cool that this doppelgänger accessorizes.

This guy even wore a hat like his museum twin.

All he needs to do now is turn it forwards, dim the exposure on his camera and its a match made in doppelgänger heaven.

Here we have a woman and her long-lost twin.

Remove her makeup, drape her in some expensive vintage silks and you won't be able to tell the difference.

Portrait of a young man and his religious-looking doppelgänger.

We just know that if he could reach into that picture and pull his twin out, he'd take him all around New York for the most amazing time ever.

This man's resemblance to his doppelgänger isn't obvious at first.

But zoom in... and in... and then you'll notice the glasses, and then... Do you see it, that slightly glazed expression, those slightly open lips? Yup, doppelgängers for real.

Even when he's studying, he's got that blue steel look down pat.

Wait, wait, that's not him, you say? That's his artistic doppelgänger? Well, damn...

Rosa, is that you when you were a little... boy?

In my past life, I was Don Francisco Armando Montalbo, an Italian nobleman.

Now, I just look cool for Instagram. Stay fly across the ages, brah.

This doppelgänger is so uncanny, we had to do a double take.

There's also the fact that the costuming is exact. Just where, exactly, did you get that coat, sir? #Killingit.

It's like they're twins. Or just an eerily similar grandfather and son.

We didn't know Sophie Turner was a muse for the pre-raphealite masters.

This distinguished and distinct gentleman has perfected his sneer through the ages...

These people look so much like their doppelgängers, you have to rub your eyes and blink twice to tell the difference.

people that found their doppelgängers in art museums omg this is so cool https://t.co/JNlfGp1juP
— deenerys (@deenerys)1514315107.0

Whoever said doppelgängers weren't a thing obviously never saw them. After all this, we just can't help but wonder who our doppelgängers are.

This was truly the sight to behold at the Louvre. This was a total coincidence of a moment!

When your baby is art...

@AlbrightKnox, we found our baby's doppelgänger at the gallery, but now can't recall the name of the painting/artis… https://t.co/HLYt3epIiD
— alexis (@alexis)1491791033.0

You take a picture! That baby looks totally ecstatic to have found her art doppelganger, and at such a young age!

This kid saw his ancestor at a science museum in Trento, Italy. Now he doesn't have to imagine what he would look like way back in those hunting-gathering days.

This is a perfect portrait.

All he needs is that super cute dog, and who wouldn't want that? Honestly, the hair is too perfect.

As if real life wasn't homogenous enough, they had to go and put Brad and Trent into classical paintings too.

Surprise, you have a doppelganger!

This guy looks really surprised to have found his doppelganger in a museum, especially in that creepy monk dude.

When you've got a total baby face...

Okay, this is too perfect. Their hair is exactly the same, and that is some very specific hair they both have going on.

This is a picture of himself.

No seriously. It is actually plausible that this is him because he collected samurai gear, and he might just have no idea that he ended up in a museum. Amazing.

The resemblance between these profiles is uncanny. Like, they must be related to each other, right?

This is the same painting as before.

Wow, these guys look alike. Those luxurious locks are something to be very proud of.

I call this one The Mansplainer.

They do look very similar. They both look like they would "actually" the heck out of some women who were trying to talk.

This is a very serious portrait.

Sure, these guys look similar, but I think the real one could take a cue from the facial hair of the guy in the painting. Let's get pointy, bro!

It's crazy when the real-life person is wearing something very similar to the person in the portrait.

Do you think it's more or less creepy when the work of art is a photograph? I can't decide! That means that person is really walking around out there looking just like this dude.

Wow, she had a luxurious past life.

If I saw myself in a museum and painting me was lounging on a daybed wearing fancy pearls, I would be so mad! Why don't I get to do that?!

Times were different for little boys back then.

This kid should just be grateful he doesn't have to wear that giant, fluffy collar that is so clearly very uncomfortable.

They're three peas in a pod.

Sure, they look alike.

But, to be honest, I think the real girl is prettier. The girl in a painting looks a bit confused. Maybe she's like, "This guy was supposed to be painting me. Why is he standing off to the side?"

Love a good, big nose. This used to be ideal! Could you imagine how horrified the Romans would be if they learned some people had surgery to make their noses smoother and smaller?

A reader for eternity.

This is actually a photo of Jonathan Franzen. I'd bet your $10 he's reading his own book.

We call this guy a smooth operator.

He's got the red coat, the glasses, and even that strap across his chest. Are we sure someone didn't see this guy walk in, paint that really quickly, and hang it up on the wall?

There's sort of a resemblance.

The real guy looks way less disturbed than the man in the picture. But outfit-wise, they are totally in sync.

This is Shakespeare's Rosalind painted by Arthur Hughes, and that, to the left, is a person who looks just like her.

These rocker dudes get it.

The guy in the painting may not be wearing nail polish, but he totally would have if it was available in his day.

Not as naked, but still looks alike.

It's probably a good thing she wasn't wearing the exact same outfit as the girl in the painting. She probably would have been kicked out.

A giant version of yourself.

I can't tell if this guy looks not thrilled to resemble this painting or if he's just trying to mimic the expression on the face in the painting.

"Hello? It's your doppelganger."

So there is not too much about these two that look alike, but they have the exact same hair color, and that's enough!

In a previous life...

That is a very specific looking person who just so happened to find his doppelganger. Extraordinary! Share with an art fan in your life!