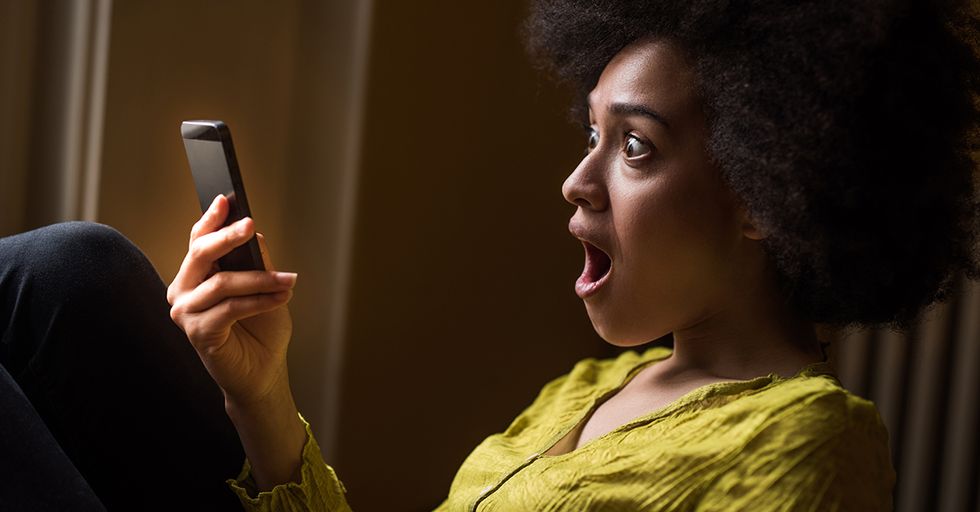 These People Obviously Flunked out of Their Sex Ed Class

However, I regret to inform you that there are a lot of people on this planet who seem to have things wrong when it comes to the female body. Like, so wrong that it's actually kind of surprising that they have made it to adulthood with such a twisted understanding of what goes on beneath the skin.

Their misunderstanding is often caused by a combination of a lack of education, their (unfortunate) embarrassment of the human body and all it entails, or straight-up misogyny. It's a real bummer! But at least it makes for hilarious interactions on the World Wide Web. Here are some of the most egregious mistakes that have ever been made when it comes to talking about female anatomy on the Internet.

(Heads up: This gallery contains images and language that, depending on where you work, may be NSFW. Proceed at your own discretion.)

This is why women pass gas:

I'm pretty sure that is not how pregnancy works.

One week later?! Nah, my dude. I'm pretty sure that woman has the stomach flu. (Also, ew about "smashes." She's a person; not a Like button.)

Oof! 29 comments– you just know that's some good reading. I hope people set her straight and this mama-to-be got the best haircut of her life!

I can't explain exactly why, but this made me laugh so hard. (And then cry a little bit.)

I wonder why he's struggling to find a source for this story which clearly, obviously, definitely happened in real life*. *Never happened. Ever.

I know there's nothing more annoying than spending an hour on the toilet, waiting for the pee to make itself through my labyrinthine innards. Sometimes I have to skip lunch!

My breasts are down here, thank you very much.

Sure, some people have nipples that are higher up on the chest than other people's. No one's nipples are located there, though.

Shh. Nobody tell him that all human bodies contain a lot of hormones. It's more fun this way.

This one is painful.

How dare women be human! It's so unattractive!

Can you imagine a period that lasted forever?! (If you are someone who thought periods lasted forever, you're welcome for this post. Now you know.)

Pretty sure you're forgetting something.

I also like that the eyeballs are highlighted here. Please do not poke women in the eyeballs.

It's exactly the same thing.

Hey, guys? I don't want to get too blue or anything, but if you think the act of sexual intercourse is similar to inserting a small piece of dry cotton into the vaginal canal, you may want to reconsider your technique.

Think for just a single second. Have you ever seen a woman's breasts move like that? Of course, you haven't.

I once used men's shaving cream to shave my legs and my legs just fell clean off! True story.

This horrible image manages to body shame pretty much every person on the planet! It's actually impressive.

Oh, he knew. He was just looking for a way to turn the conversation to genitalia. Class act.

That's pregnancy for ya!

A lot of people don't know this, but fetuses don't grow at all during pregnancy. They just become more detailed.

This is going to be a long 9 months.

First of all, the idea that women's periods sync up is a myth. Secondly...actually, you know what? Let's stop there. There's too much to unpack here.

I would really, honestly love for someone to explain to me how armpit hair could possibly be a health hazard. Is someone licking this teacher's armpit?!

This one is just amazing.

It doesn't matter. It has never mattered.

Let's sing together! "The pelvic bone's connected to the arm bone! Just kidding; they're not connected at all! This is a disaster!"

Bless this person for at least knowing about pads and menstrual cups. But yeah. Swapping a tampon out once a month? No.

Just the idea of a double-sided sticky pad made me cringe. I can't keep thinking about it. Let's move on.

What a great idea!

Ah-ha! That's where you're wrong! As we've already established, we can't force pee out. We have to wait for the pee to traverse our inside mazes.

There are obviously several issues with this person's post, but the idea that controlling one's bladder has anything to do with a period is just laughable.

No, you cannot throw up your baby. But be careful when you use the bathroom. Some babies are smarter than others and can find their way through your lady-maze along with your pee.

This person thinks periods are unnatural.

I'm curious about how men's bodies cleanse themselves from a poor diet. I would love to see the research on that.

LOL at "3–10 minutes." Like your uterus has a stopwatch. "She just got out of the water! Everybody, get ready to bleed in T-minus 3 minutes!"

At least he was too afraid to ask.

Yup. Babies can only be born in hospitals. Before hospitals were built, women just gave birth to fully grown adult humans. Share this with someone who will get a kick out of these bizarre misunderstandings!