These People Prove That Beggars Can, in Fact, Be Choosers | 22 Words 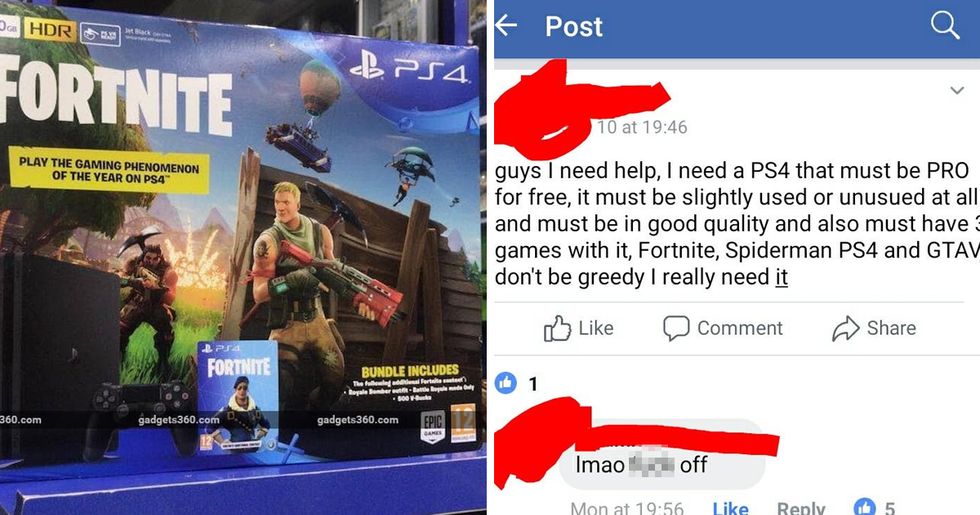 These People Prove That Beggars Can, in Fact, Be Choosers

You are probably familiar with the phrase "beggars can't be choosers." In case you have never heard it before, it means that if you are in dire need of something, you don't get to be picky and make additional demands from the people who are kind enough to provide it to you.

Most people understand that that's the way it goes and are grateful to those who reach out to help. Others, not so much.

If you've ever tried to sell something online, you have probably experienced your own "choosy beggar" story — someone claims to need something and shows interest in your listing, but when it comes to the actual transaction, things start to go haywire. If you have been lucky enough to avoid such an interaction, then congratulations!

Here are a bunch of examples of "choosy beggars" that other people have dealt with. Get ready for your blood to boil.

“Volunteer to wait on my family at Thanksgiving” from ChoosingBeggars

What are you thankful for this year? If you're having a hard time thinking of something, you can at least be thankful for the fact that you don't have to wait on a bunch of strangers for zero pay. She must at least be giving them food, right?

You know this is a person who is used to saying they want something and instantly receiving that thing. Hopefully, they learn it doesn't always work that way.

I love how this person says "ohhhh noooooo," as if they accidentally bought food for their child. Did they forget that kids have to eat?

Bridezillas requirements to be in her wedding party. from ChoosingBeggars

I would be so tempted to join this bridal party just to watch how everything plays out. Unfortunately, I would not be able to afford it.

You know you're dealing with a choosy beggar when their logic starts to break down. If you have a friend who will do it for free, use that friend! If you want a particular artist's work, be prepared to meet their demands! It's simple.

This one is amazing.

At least he's not a bad FBI agent... from ChoosingBeggars

Man, he had me going there for a second. Are you sure he's not an FBI agent? I'm pretty convinced.

I tried to give away two harnesses that no longer fit my dog. Did not go well from ChoosingBeggars

People who use their kids like this are the worst kinds of people. I'd also cry if my parent was like this.

Ready for another logic breakdown?

Writing a bass line is a skill, but it doesn't take work? How do you figure?

This one is simultaneously my favorite and least favorite.

I need a free 100-mile bus trip for 20 people and don't you dare offer me any less. from ChoosingBeggars

"It's for a church, honey. NEXT!" The people offering solutions are absolute saints.

A+ response from this person.

"Thanks for wasting my time."

This guy cracks me up lol from ChoosingBeggars

So I have this straight: Refusing to accept the lowball offer that you reached out with was a waste of your time? This one fails to compute.

People throw the phrase "beggars can't be choosers" around an awful lot. Rarely is it quite this relevant to the situation at hand.

"Okay first off, I'm not going to be paying you to make a website that will be free to visit. That doesn't make sense. And secondly, stop using words like 'rates' and 'estimates.' It makes you look like an asshole." from ChoosingBeggars

I like to imagine that "BUG TIME" is the "million dollar idea" they're referring to. It's just a giant cage filled with bugs where you can spend some time if you want to.

I'm trying to sell my Ford truck. As you can see, it did not go well. from ChoosingBeggars

Once again bringing the kids into this! Let's hope the son at least has a better understanding of how car payments work.

"I need a financial miracle."

Just not that kind of miracle. Can I get one of the miracles that you don't have to work for?

I hear that if you get a job, they literally have to pay you; isn't that wild? Could just be a rumor, though. Maybe you should stick with this method.

When clients think this is how commissions work 😂🤷‍♂️ from ChoosingBeggars

What world is this person living in where they expect an artist to just design a bunch of logos for them— for free —and then maybe decide to pay them? Let me simplify this for everyone: Pay artists for their work!

Should we delve into the irony of the fact that he's telling people not to be greedy? Nah, we don't need to do that.

"Take the opportunity or leave it."

Now, by "the opportunity," do you mean the opportunity to spend hours purchasing food, cooking it for other people, and making hardly any profit in the process? If so, I'm out too.

"I wasn't intending on paying for it."

Lady looking for a very specific mattress. from ChoosingBeggars

I'm not saying you can't request donations every now and again, but if you don't make that clear and someone makes you an offer, don't respond like this person.

I'm so curious about what they were going to try to get the price down to. Maybe $1.75?

"Some friends I have."

I’m not taking the bus!! from ChoosingBeggars

The crazy thing is that by the looks of it, this person does have friends. I can't imagine why.

Pay ME for exposure from ChoosingBeggars

Not only are they not paying artists for their work, but they also want artists to pay them for posting it. That is all kinds of messed up. Artists, don't fall for scams like this. You're doing a disservice to yourself and to all other artists.

Who's the cheap one?

Girl refuses to pay $20 an hour for me to help her move, and decides to call ME cheap. from ChoosingBeggars

I mean, you're the one who won't pay for the work you're requesting. I'm pretty sure that's kind of the definition of cheap.

"No no, you misunderstand. It's an honor for you. To be allowed to draw for me." from ChoosingBeggars

There is only one appropriate response to someone who tells you it'd be an honor to work for them for free. Get bent.

Damn and I thought you guys are just super unlucky, but then met this...this animal. I was shocked how entitled some people feel. from ChoosingBeggars

This is the worst! How are real, living people like this in real life?

The audacity of reaching out to someone solely for a free ticket; and rejecting that free plane ticket because the flight left too early? Honestly, it's inconceivable.

If it's so easy, make it yourself.

You said you could make it yourself. So, do that. End of conversation.

You should be ashamed of yourself.

If you think this is bad, keep reading. It gets worse.

"I thought you were nicer."

At this point, I would be tempted to type up notes with all of the wrong info. But that would take more effort than this person deserves. Know any artists or freelance workers? Share this with them.