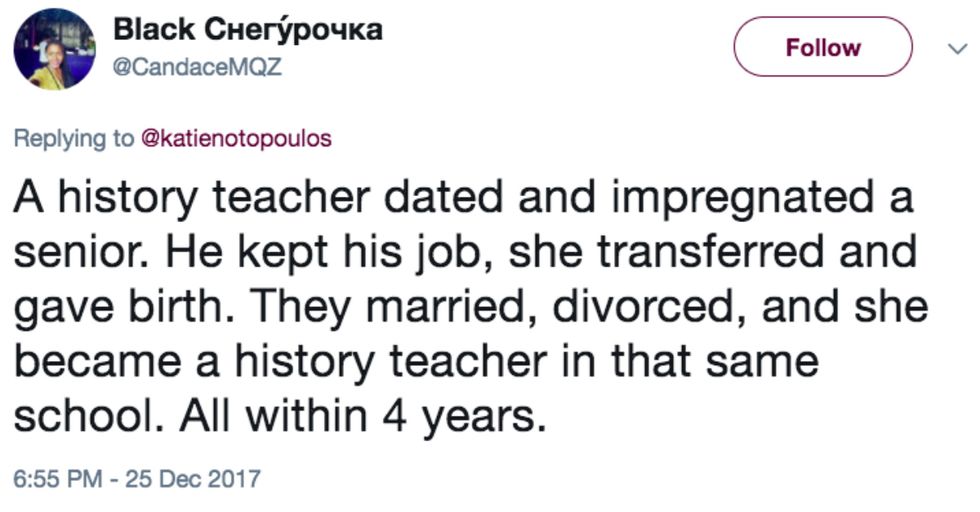 Every high school had one: the thing that happened during your time there that nobody could stop talking about. Juicy gossip, scandalous stories, rumors that were never quite confirmed.

Whatever it was, everyone remembers the one event that happened during their high school years that would make their friends now say "no way that really happened."

This week in an equal parts hilarious and horrifying Twitter thread, people shared the stories that shook their schools.

Katie Notopoulos started the thread by asking people to share “the incident" that happened at their high school.

Of course, people immediately knew what she meant and probably most people didn’t even have to think very hard about what their “incident" was.

There’s always that one kid in every high school who is too smart for their own good.

Two days! Nobody could fix it for two days? It must have been a very uncomfortable time to try and look up your homework assignments online.

We have so many questions about this one.

Guess his son couldn’t be on any sports teams that played against his old school without giving his classmates a heart attack.

This is like four Lifetime movies in one crazy story.

Maybe she was really in love with history the whole time.

The kids at this school had serious climbing skills.

Spoiler: They made it say R U High, if it took you a second to figure it out. (Like it did for us).

That is a seriously impressive senior prank.

And we feel like they should get extra credit for gym class?

There’s always that one weird kid in high school.

@katienotopoulos Some kid took off his pants and walked around the hallways naked from the waist down for a while before getting caught.
— RBG (@RBG)1514259170.0

But usually they at least keep their clothes on.

How many times have your parents told you: no matter what the cool kids are doing, don’t try sheetrock.

@katienotopoulos Someone left campus during study hall to buy cocaine but when an undercover cop arrested him, it t… https://t.co/QyNKWcnirR
— ⭐️bex schwartz (@⭐️bex schwartz)1514264068.0

Was it smashed up? Or just in slabs?

This was probably the most entertaining mass of the year.

@katienotopoulos The school accidentally got a faith healer to speak at mass. He tried healing a trader's cancer an… https://t.co/vLSoyJelYb
— Colleen Lavin (@Colleen Lavin)1514259860.0

No follow up on if he was successful, though.

This one is basically a nightmare situation.

@katienotopoulos Some senior boys stole some drawers of the library's card catalog and dumped them in the Etowah Ri… https://t.co/IIEHLsG7SZ
— Robin Littlefield (@Robin Littlefield)1514264109.0

He carried that possum out by the tail! And he was captain of the football team and valedictorian, probably.

Well, this is one way to motivate your players.

Another, better way, would be... anything else.

There is always that one kid in high school who will eat anything for money.

@katienotopoulos A kid once came to school with his severed nipple in a bag and ate it for $12. So I mean that was pretty cool
— Colin Crookston (@Colin Crookston)1514311608.0

This is taking it a bit far.

Thanks for the memories, high school!

We'll never forget the weird stuff that happened especially the stuff that most definitely did not make the yearbook.