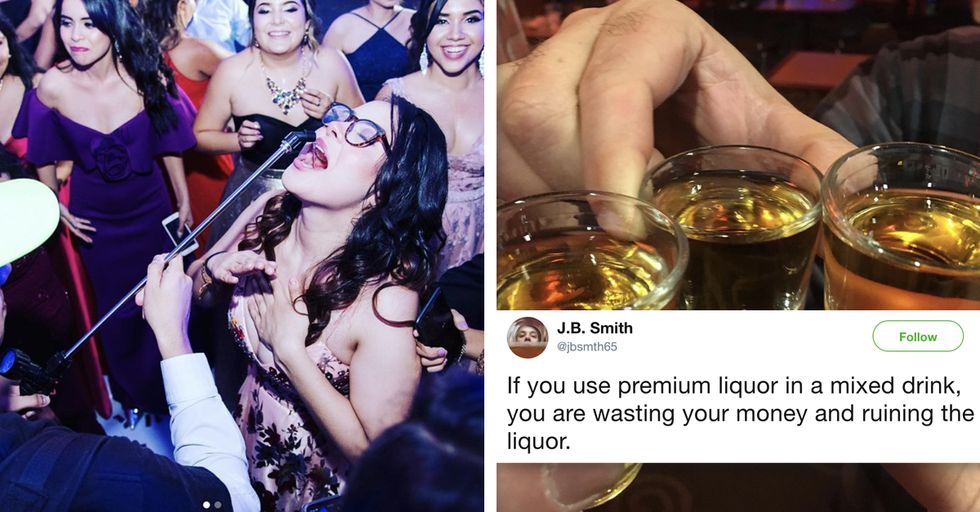 These People's Weird Opinions on Alcohol Will Probably Make You Furious

Oh, alcohol. It can be the start of the best night ever or the worst mistake of your life. For those of us who like to enjoy an adult beverage every now and then, it's hard not to develop strong feelings about what's worth drinking and what should be immediately dumped into the sink and lit on fire. (Warning: Don't actually do this.)

Some people are all about cracking open a frosty beer on a hot summer day, while others think that every beer they've ever tried has tasted like straight-up stomach bile. Some enjoy a crisp glass of Moscato, while others declare this sweet wine to be the most lowbrow and trashy of all wines. For the record, this is a correct assertion.

Ready to find out exactly where you stand when it comes to your favorite drinks? Pour yourself a drink and keep scrolling. You're going to need it.

Most people have a love/hate relationship with alcohol.

Sure, it tastes amazing and makes you forget all your troubles, but after a night of overindulging you wake up full of regret, shame, and with a hangover that will make you never want to ingest another drop of alcohol again.

Everyone has their own favorites when it comes to boozy refreshments.

Some people are all about a chilled glass of white wine after a tough day at work. Or straight out of the bottle works, too.

Others are all about the "brown" liquors.

Whiskey, Brandy, Cognac, Rum... Brown liquor drinkers tend to look down on clear liquor drinkers and take pleasure in regularly schooling them about their poor alcohol preferences. You know who you are.

He asked that people share their unpopular liquor opinions. Meaning, what's something you've always felt strongly about when it comes to alcohol but not a lot of people agree with?

The responses were, as you might guess, quick and plentiful.

Not surprisingly, people have a lot of opinions when it comes to their favorite drinks, and the discussion soon turned into a pretty heated debate. Let's see what has people all riled up, shall we?

The fact that more people don't regularly sip on gin has this Twitter user pretty darn outraged. Honestly, I 100% agree. Gin doesn't get the respect that it truly deserves.

....which is illustrated by this response.

The fact that it tastes like a Christmas tree is one of the best parts of drinking gin! This person is just being overly dramatic.

And, of course, our old friend Fireball gets thrown into the ring.

"Cinnamon-flavored rat poison" is a disturbing-yet-completely-accurate description of Fireball. Prove me wrong.

You can't pick up a bottle of cheap $3 wine and expect to have free access to the high shelf booze at your friend's dinner party. Sure, I've done this before, but that doesn't make it morally right.

Next came the "all alcohol tastes terrible" comments.

Alcohol basically is poison, so this person isn't technically wrong. But to make such a blanket statement about all types of liquor just shows how unrefined this person's palate is.

I'm sorry but over-hyped?!? You're combining bubbly, effervescent booze with something healthy and therefore justifying mid-morning drunkenness. You can pry my mimosa out of my cold, dead hand.

Okay, this one brings up an interesting point.

...but it also raises some valid questions. How do you define the ability to hold your liquor? Is this person saying they've never had too much to drink and thrown up in an Arby's parking lot before?

I knew beer would be a hot button issue, but I had no idea such a large number of people found it so abhorrent. ...apple juice? Really?

Then came the discussion of how different drinks make you *feel* while drinking them.

I can actually see where this person is coming from. Wine tends to make me relaxed and goofy, while hard liquor makes me try to break into the nearest pet store and free all the geckos from their tiny prisons.

And, of course, the tequila haters make themselves known.

Why is it that everyone has had at least one bad experience with tequila? Okay, so yes, I've made some horrible decisions after a night of tequila shots... In fact, I should never touch tequila ever again.

Moscato, the sweetest of all wines, is labeled "overrated" by this bitter Twitter user.

I've got to say, I agree with this one. Moscato tastes like a melted Popsicle and makes your teeth hurt after a single glass.

This is just good common sense.

This is actually a pretty popular opinion.

I can't tell you how many times I've seen someone drop an ice cube into their red wine. It horrifies me every time.

Here's someone who's just throwing alternative options out there.

You have to admit, they bring up a good point. Also, calling it "cancer poison" does make the thought of drinking alcohol slightly less appealing...

Another anti-beer activist enters the debate.

I don't recommend ingesting anything given to you in a gas station that hasn't been approved by the Food and Drug Administration. It's just asking for trouble.

Shots are finally fired on our good friend vodka.

Sure, it's not the most exciting of liquors, but it gets the job done. A Vodka Cranberry is one of life's simple pleasures!

Who here agrees with this statement?

I wouldn't say "at all," but it's definitely not something I usually find myself ordering. But if it's the only free drink at a wedding I'm all ABOUT it.

This person is so OVER champagne.

Sure, it's mostly about the aesthetic, but who cares?! Isn't it fun to feel fancy sometimes? Can't I have at least one second of pretending to lead a luxe, expensive lifestyle? CAN'T I?!

This person seems like they'd be a lot of fun to have at your next Happy Hour.

Who wouldn't want some condescension and judgment with those $5 drinks and wings? Side note, what are you SUPPOSED to call them, then?

I agree that it tends to get a bad rap, but better than ANYTHING else? Have you even tried Mike's Hard Lemonade?

I'm concerned about this person's general health and well-being.

If Everclear tastes like WATER to you, then there's a serious problem. You should probably go to the nearest hospital ER immediately.

I was with this guy until the end of his comment.

Sure, most alcohol is overpriced, and paying more than $50 bucks for a bottle is not something I'm willing to do. But to say it all tastes "nasty" is simply not true. And I've created a 20-minute PowerPoint presentation to prove this fact.

And this person has finally had enough.

I hear you, buddy, and trust me, I've been there. In fact, after an incident with a hammock on New Year's Eve 2016, I made the exact same vow.

But the sweet siren call of alcohol made me come crawling back.

Whatever your boozy opinions are, remember: It's all about moderation. Be like Amy Schumer and limit yourself to just one glass per night.