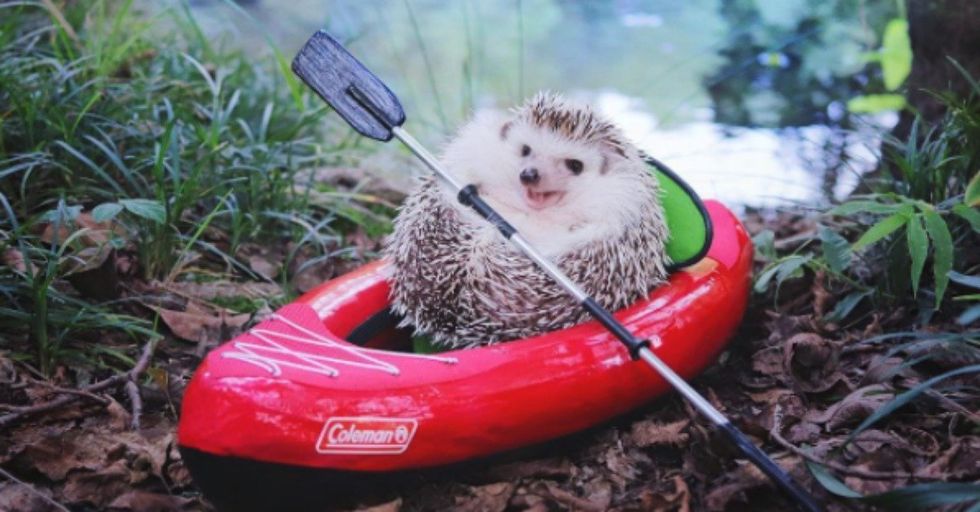 If you want to feel happy inside, you've come to the right place. Prepare to meet the most delightful hedgehog there ever was.

He's a sweet little hedgehog who lives in Japan. Here he is shyly peeking out from the warmth of his owner's shirt while playing hide-and-seek.

His owner likes to dress him up in tiny hats and take pictures of him going on mini adventures. Azuki even has his own tiny house that was built especially for him.

This is his rainy day outfit. Although shy, Azuki is always ready for any adventure. He wears a top hat when he's feeling fancy and a straw hat when he's going about his daily business.

Here he is outside his home.

Is Azuki the Great Pumpkin King?! He's rightfully very excited that fall is here. He must have a green thumb, because those pumpkins are almost as big as he is.

Azuki is planning a big adventure.

He's heading out to the wilderness to go camping with some custom equipment. He's a little nervous — but excited to spend some time in the great outdoors. The photos might be the cutest thing you've ever seen...

Azuki has arrived at the campsite!

He's a little flustered. What does a hedgehog do first? Pitching a tent seemed a little overwhelming, so he instead set off to gather some firewood.

After finding some wood and gathering it in a hedgehog-sized wagon, he mustered the courage to pop the tent.

It was difficult, but Azuki persisted. He was very proud of himself! His dad got him a miniature tent from Coleman, and it was super cozy inside.

He watched the stars and was very impressed by the vastness of the universe. Someone so small can make such a big difference in the world — just by existing — he thought. He's pretty deep for such a small creature.

There's nothing like a warm, tasty breakfast when you're camping.

Azuki will cook you breakfast, but he won't promise not to nibble on it while he's working. Who do you think you are, the Queen of England? (Azuki apologizes if that last comment made you feel attacked. He still loves you, OK? OK.)

Eating is one of the best parts of camping.

As his final camping adventure, Azuki decided to try his hand at kayaking.

It was difficult at first, but he got the hang of it. He's having a lot of fun in this picture. He told his dad that he thinks his biceps are getting bigger, too.

When Azuki got back from his big trip, he took a well-deserved bath. He had fun out in the wild, but he's pretty happy to be back home with Dad.

Azuki followed his dreams, and he demands that you do too. What do you think he should do for his next big adventure?
20%