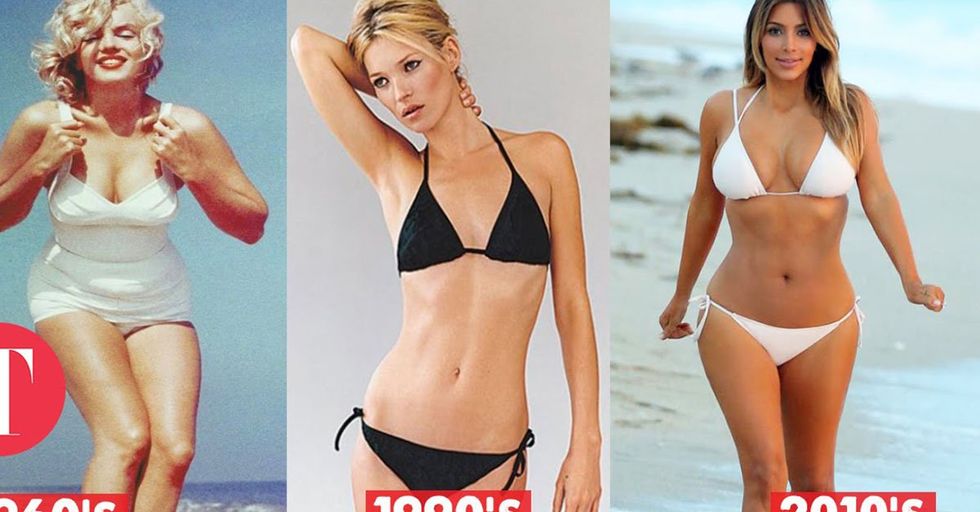 It's hard to view our place in history, but everything changes over time. Politics, languages, and even what people find beautiful or sexy.

There's a lot of factors in both culture and society that influence what we find attractive, so let's go back over 100 years to see how we got to where we are today. I think you'll see that things have a way of coming back around, even over just 100 years.

In the Victorian Era in the 1800s, waists got REALLY small. The hourglass shape was in, even if women weren't exactly showing a lot of skin.

The cinched outfits actually led to deformed ribs, difficulty breathing, and crooked backs. So if you think you're doing a lot now to look your best...just be glad it's not harming you.

In the early 1900s, the Gibson Girl became the picture of beauty.

The hourglass figure was still there, but the look was a little more casual and the corsets got a little looser.

In the '20s, skin started to show with the popularity of the flapper girl look.

This was a rebellion against the prim and proper looks before, so girls took to baggy dresses and boyish haircuts, advertising a little more fun than before.

During this time, cleavage was still hidden, but showing off arms, shoulders, and short hair was all progress.

In the 1930s, Hollywood got big and the flapper girl fell out of favor for something a bit more glamorous.

Life magazine described the ideal body as "The perfect 1938 figure must have curves but it differs from the perfect figure of past decades in relationship of curves to straight lines … Now, though, the ideal figure must have a round, high bosom, a slim but not wasp-like waist, and gently rounded hips,"

In 1931, ethnic women also became icons of beauty, something that had never occurred in the past. This is Dolores del Rio, a Hollywood star of the era.

Then Marilyn came along.

She embodied the "bombshell" aesthetic. A bigger, curvier look that was very feminine. Also, she is the first iconic blonde that's kept the image in fashion magazines for decades afterwards.

Can we go back to that era?

The 1960s saw a return to the tomboy looks of the 1920, but with a big, bold makeup that made a statement during the turbulent times.

In the '70s, tan and long, feathered hair was the hot look.

Farrah Fawcett embodied this look, and many took after her.

Women were getting more liberated during this time, but they were also, ironically, falling prey to aesthetic stereotypes.

In 1983, signer Karen Carpenter died from anorexia, opening many people's eyes to the problems at hand.

After her death, the disease was taken far more seriously.

Later in the '80s, athletic was in. Florence Griffith Joyner became a sex symbol after her turn in the 1984 Olympics.

And Jane Fonda made a name for herself in her 40's with an empire of exercise videos.

Then, the '90s came to fruition with "heroin chic," a look that many criticized drug use and dangerously thin figures.

Kate Moss became the poster girl for this movement, but it quickly became a sensation, albeit a shortlived one.

The 2000s were a funny time because as much as athleticism and thin figures were valued, Photoshop turned the ideal body type into something that few people could ever actually attain.

In the 2010s, butts were big. Both literally and figuratively. It seems to be a response to the unattainable body types earlier.

What will the future bring? Any guesses?