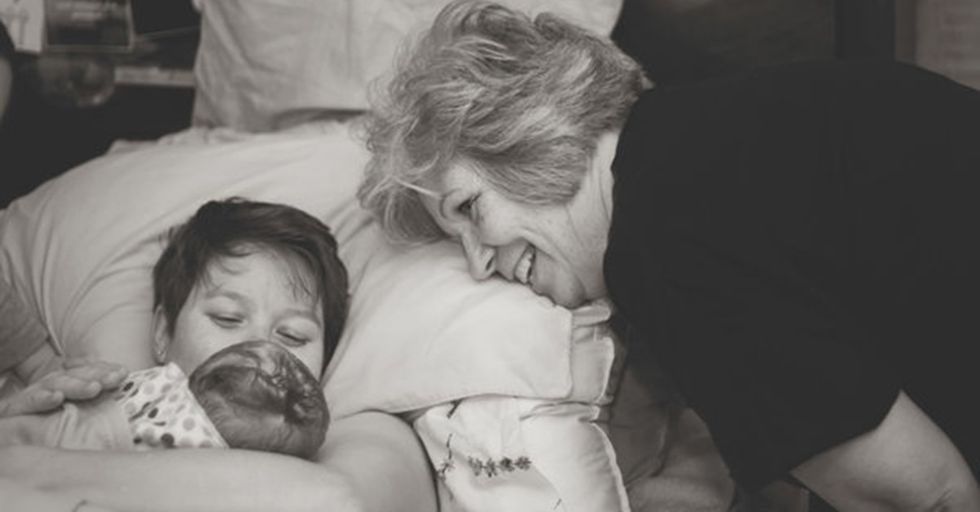 When it comes to the many responsibilities of mothers, it's the birth that is perhaps the most significant and symbolic. So for a mom-to-be to have her own mom in the room when the miracle happens...that's something special.

These amazing images taken during and after childbirth show that although a mother might become a grandmother, she's still a mom to the woman giving birth.

“She was showing so much concern for her laboring daughter. It was incredibly touching and had me tearing up."

“A special moment between new mom and new grandma — grandma was telling her how proud of her she was."

“When the surprise announcement of the baby’s gender was exclaimed by the doctor, everyone jumped up and down cheering ‘It’s a boy!’ and this mother wept and looked toward her daughter, also a mother — now of a son, with the most adoration and love possible."

“Dad was feeling a bit queasy, so this brand-new grandmother was overjoyed to have the honor of cutting her grandson’s umbilical cord."

“The mother (grandmother) supports her daughter as she begins to push."

“This woman is a single mom by choice (her baby has a donor-dad), and her 81-year-old mother stood by her throughout the whole process, from becoming pregnant until childbirth. This is their ultimate moment."

A mother consoles her exhausted daughter.

“You could feel the love in the room!"

A mother shares her love with her daughter and granddaughter.

“The mother of the laboring woman flew last minute to make the birth. She got there during transition and quickly went to support her daughter. The most amazing and special part of this story is that the mother birthed her daughter at home 30 years prior."

“This photo is post birth and grandma is cradling her daughter in a very tender moment between the two."

“This one brings tears to my eyes. Such a loving mom and dad!"

A mom brushes her daughter's matted hair as she sleeps.

“After all the strength and endurance she gave to her daughter while she labored all night long, it was all over. She falls back and completely lets go and is overcome with emotion. And I can hardly keep my camera still."

“This mother is holding her daughter as she holds her new baby for the very first time."

via: Light of Mine

“A mother’s love mirrored by her daughter’s strength."

via: Light the Way