These Playgrounds Are, Um, Really Inappropriate for Children | 22 Words 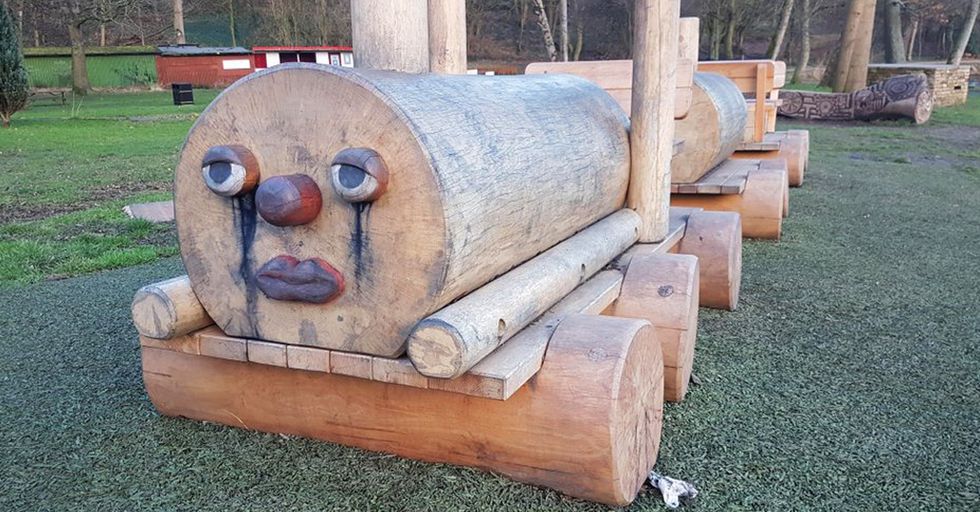 These Playgrounds Are, Um, Really Inappropriate for Children

Playgrounds are supposed to be innocent and fun. They are supposed to be optimally designed for kids to have extreme amounts of fun while staying safe. Of course, there are everyday perils that come along with most play areas. Plastic materials that burn hot in the sun, wood chips that get everywhere, static electricity from rubbing your head against the slide, splinters from wooden structures... In fact, that last one reminds me of this awesome playground near my house growing up. It was at an ice cream stand, and there was a wooden castle and a wooden ship and they were awesome... except they were absolutely full of splinters and bees from all that sticky ice cream residue.

In short, there are already enough things that can go wrong on a playground. No one needs these areas for kids to be any more dangerous or inappropriate than they are already. And yet, here we are.

Playgrounds are never as fun as we want them to be.

But the ones in this list are so much more terrifying than you could ever imagine. For all the reasons.

This inflatable slide is very...um...sexual, and I don't really see a reason that it must be this way. Someone is playing a cruel joke on these children.

This seems like a very private moment for Pikachu and I'm kind of appalled that we are witnessing it.

Ah yes, now every child can fulfill their dream to play pretend as elephant feces. What? Every kid doesn't want to do that?

We have lift off!

I think this is supposed to be a picture of a kid sliding down a slide with a parent on their side, but it looks like two people about to fall off a plane as it takes off.

This playground structure seems to be saying, "I'm here! I have tons of holes for you to enter and exit. Come on, kids!"

What a rookie move, Spider-Man! You'd think the skintight suit would at least warrant a pair of thongs.

Call me crazy, but I don't want to play on anything that looks like it's going through a terrible depressive episode. This train is like, "I thought I could...but I can't."

Um, what? Why is Donald Duck staring at the junk of anyone who gets on this ride? That's so not cool.

I'm sorry, I don't BOOBS know what it is about this BOOBS playground but something BOOBS is very BOOBS inappropriate BOOBS.

Um, whoever this character is is clearly bending forward, spreading their butt cheeks, and letting people in from behind. No thanks!

Winnie the OH, NO!

Ted? Ted Cruz? Is that you?

OK, so this is clearly a zebra without a head, but it looks like it was built that way because the neck has like, blood and bone in it!

If your feet actually look like that, get yourself to a doctor. STAT.

Um, children play on playgrounds. Most children aren't six feet tall. Maybe this is an activity for the parents.

Please tell me this isn't real. This can't be real. This slide is basically at a 90-degree angle. No thank you.

An exceptionally light and small kid could go flying off the sides of that slide in an instant! This is such a safety hazard.

OK, aside from what it depicts being wholly inappropriate, what is its function? Is it a bench? Are you supposed to play on it? There seems to be no purpose for this thing.

This little ducky will suck out your soul and feed it to the devil. Wanna ride?

Clowns are already terrifying and evil. You don't have to make them 20 feet tall and put a slide coming out of them in exactly the wrong area.

First of all, This slide drops off way too high! Second of all, who took that picture? Why weren't they waiting at the bottom to save each child who slid down?

What is it with slides that end several feet off the ground? Who do they think are playing on these things?

This is just for the millennials in the audience, but this creature looks exactly like if Oblina from Ahh! Real Monsters melted.

Yeah, Frosty the Snowman has a vagina. And that small child is diving headfirst into it.

There is no excuse for this. What were they even trying to do?! This is a big 'ol NOPE.

Spider-Man looks like he's doing something very naughty to the rest of that bounce house. I feel dirty just looking at it.

Well, I wish you luck falling asleep tonight! I guarantee you will see this face every time you try to close your eyes.

If you, um, have an, um, organ that looks like this, you need to get it checked out right away.

Whale of a time

Come on. Not while the children are around. Share this with someone to spread the horror!