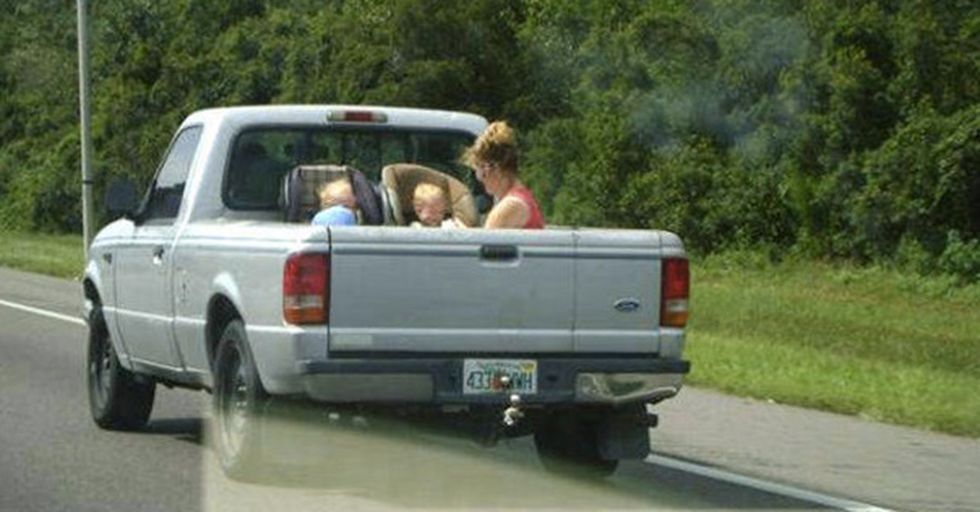 The world's a dangerous place. Even when you're trying your best to be safe and responsible, things can go off-track, landing you in the hospital...or worse.

Yet the people in the pics below seem to be going out of their way to invite danger and risk into their lives. Do they have a death wish? Are they dumb? We'll never know. All we have are these pictures showing us that many, many people in the world don't give a damn about safety.

At least get in a lane!

Well, someone sure trusts that board.

When it's so hot you risk death to fix the AC...

That outfit is about three seconds away from getting sucked into the spokes of that bike.

If you can't see the danger, then it doesn't exist.

SO MANY things could go wrong here.

Well, as if being on a bike wasn't dangerous enough...

"We are the harness."

That is NOT a scaffolding.

Mother of the year.

It's the minivan of motorbikes.

I hope it beeps as it drives through.

OSHA does NOT approve.

He knows. He just doesn't care.

That's NOT a helmet.

Look at the acrobat over here!

Yeah, you might want to set that on a table or something...

The proximity of his feet to the wheel is creeping me out.

That better be one strong rope...

Well, he found two ways to make this dangerous.

Don't worry. The power lines will break his fall.

How to make a motorbike even LESS safe...

You can tell he's psyching himself up to actually go through with this.

What a cruel taunt.

I think the risk here is intentional.

There's a party, and I wasn't invited.

He thought he saw a penny.

Enjoy the last four minutes of your lives, ladies.

The guy with the stick isn't really helping.

He's close to recreating the bow scene in Titanic.

No one will bother him in here.

Alert and ready to pounce...

Do you trust their strength?

If it works, it's not stupid.

This is as funny as it is insane.

Oh, no. Those are not load-bearing chairs.

The gang goes for a ride...

One crotch between that dangling man and death.