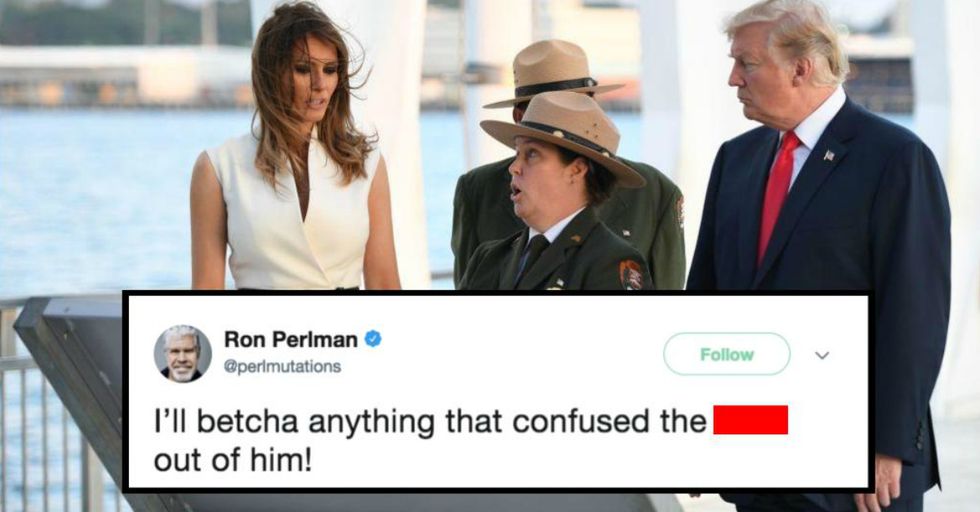 Barack Obama was born in Honolulu, Hawaii on August 4, 1961. Current president Donald Trump denied this fact at least fourteen times from 2011 to 2016. In March of 2011, Trump said, "Why doesn't he show his birth certificate? There's something on that birth certificate that he doesn't like," while on the talk show The View.

On The Laura Ingraham Show, he said, "He doesn't have a birth certificate, or if he does, there's something on that certificate that is very bad for him. Now, somebody told me — and I have no idea if this is bad for him or not, but perhaps it would be — that where it says 'religion,' it might have 'Muslim.' And if you're a Muslim, you don't change your religion, by the way."

There are so many things wrong with this statement, but the most notable is that birth certificates don't have religions listed on them. How would a baby, who cannot speak, pick a religion? Also, why is Trump suggesting it could be bad to be Muslim? And why can't he accept that Obama was born in the United States? He repeatedly argued that Obama was born in Kenya, not Hawaii.

Residents in Hawaii's state capital remembered these remarks when President Trump arrived for a visit on Friday.

Trump was greeted with peaceful protestors when he arrived in Honolulu.

Many of the signs cheekily said, "Welcome to Kenya," trolling the president for insisting that Kenya was former president Obama's birthplace.

The protest was peaceful and hilarious.

This woman is wearing a hat that says, "Aloha!" Her sign reads, "Aloha also means goodbye." Protestors showed pride for their city and state.

More protestors showed up with "Welcome to Kenya" signs.

Some people even dressed up for the peaceful protest. A woman in the background of this photo appears to be wearing a costume referencing the TV series A Handmaid's Tale, a dystopian story about women being subjected to the oppression of an extremely patriarchal society.

Jeff Sessions called Hawaii "just an island in the Pacific."

In response to Trump's disrespect of Hawaiian officials, residents showed pride for their state in possibly the most lighthearted and most snarky protest.

Signs ranged from "Welcome to Kenya" to broader roasts of Trump.

The protesters seemed to be smiling in most photos and protesting a wide range of issues related to the Trump administration. The people in the back of this photo are wearing shirts that say, "Chins Up, Fangs Out" around a picture of a cat — probably a nod to Trump bragging about "grabbing women by the pu**y."

Trump only got 30 percent of Hawaii's vote during the election. By contrast, Hillary Clinton got about 62 percent of the vote. The state has four electoral votes.

This video shows the size of the crowd that greeted Trump on his way into the Hawaii State Capitol.

That first set of yellow signs reads, "Wish You Weren't Here." Other signs spelled out, "Hawaii - 3, Trump - 0," a reminder that Hawaii blocked Trump's attempt to institute a travel ban against Muslims three times.

There were a small number of Trump supporters at the rally as well.

A Los Angeles Times writer reported that there were about ten pro-Trump protesters across the street from the crowd protesting the president.

You wouldn't know any of this from Melania Trump's Twitter, though.

"Thanks for a warm welcome to Hawaii!" she wrote on Friday, alongside some photos of her hugging a child wearing a lei. Apparently, we have very different ideas on what a warm welcome looks like.