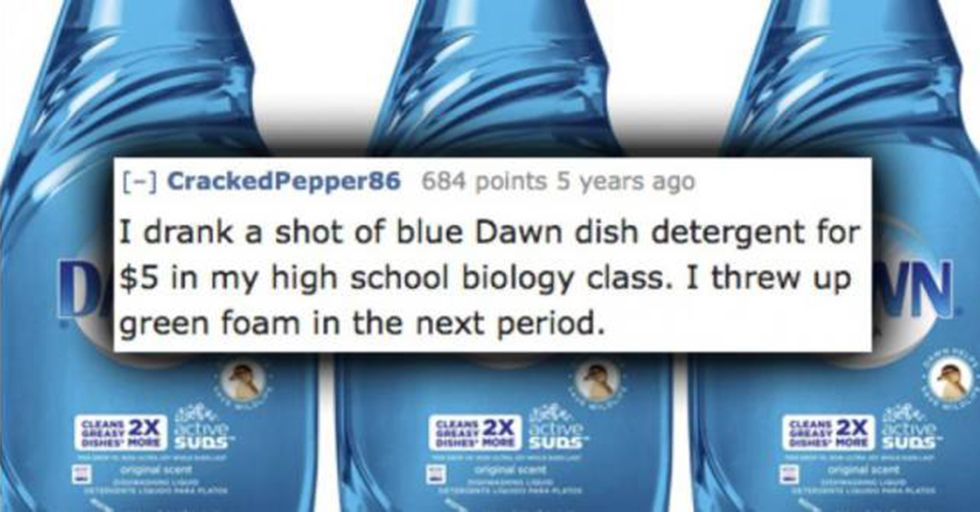 Money, especially when you're young and adventurous, can be hard to come by. So when an opportunity, no matter how questionable, comes along, some people are going to accept. Even if they really shouldn't have, in hindsight.

Not even for cash.

I guess to some people, chocolate's as good as money. I can't imagine that school bus window was very clean though. I hope for the licker's sake that it was at least imported chocolate, even if we all know it was a Hershey's bar or something.

Trading nudes for a video game?

This definitely sounds like one of those exchanges that seems innocent and easy enough at the time, but could really come back to bite your older self. If you treat nudes like currency, you'll regret it.

First of all: Don't eat stuff that's been sitting in formaldehyde. Secondly, if you're going to do something that gross, MAKE SURE YOU GET PAID!

That's not a bad payday for a night's work.

Granted, it's a little...forward, but if anyone's going to be respectful about it, it's probably a group of elderly ladies. Or maybe they get crazier than we ever realize. Sounds like this guy made out ok, though.

If you're going to endure the grossness and indignity of licking one foot, what's the harm in quickly doing it again four more times for more money? No harm, right? Well, unless they are ticklish and clock you in the face...

I'm sure the next period truly was a sight to behold. Just getting down the detergent must have been a taxing effort, never mind the ugly fallout in the next class.

Wow. That's a big investment for a crayon!

And she didn't even get it in the end. I'm sure that's the type of disappointment that will turn someone cynical in a really big hurry.

I mean, it's even weirder when you think that the guy who paid was the one who wanted to smell, but this whole thing gives me the creeps. But, $100 is a lot of money sometimes.

You know what the worst part is?

This is going to sound funny, but the worst part is that the guy didn't get to eat his own hair, but rather some other dude's. I don't know why that bugs me so much, but it really does.

Not only did she take down half a live fish (YIKES), but she spent the money on a knife. Presumably, so she could cut future fish? Maybe this was her way of investing in a totally new business.

Do you know where those come from? Did you see him or her retrieve it? I'm trying not to be judge-y here, but that's a lot of nastiness for a mere $20. Unless you did this back in the 1930s or something. In which case...good job.

Take a swig from the bucket.

This is the type of thing that I think every guy does in their early through late teens. At least it wasn't a spit bucket, but rather a bucket where the unconsumed beer went. Hey! The little differences matter!

Mic drop. Anyone who's done time in a store knows that losing dignity and enduring suffering can come in all forms. The worst part about this line of work for people who don't like it? It's not a one-shot deal. They come back again and again and again for that payday.