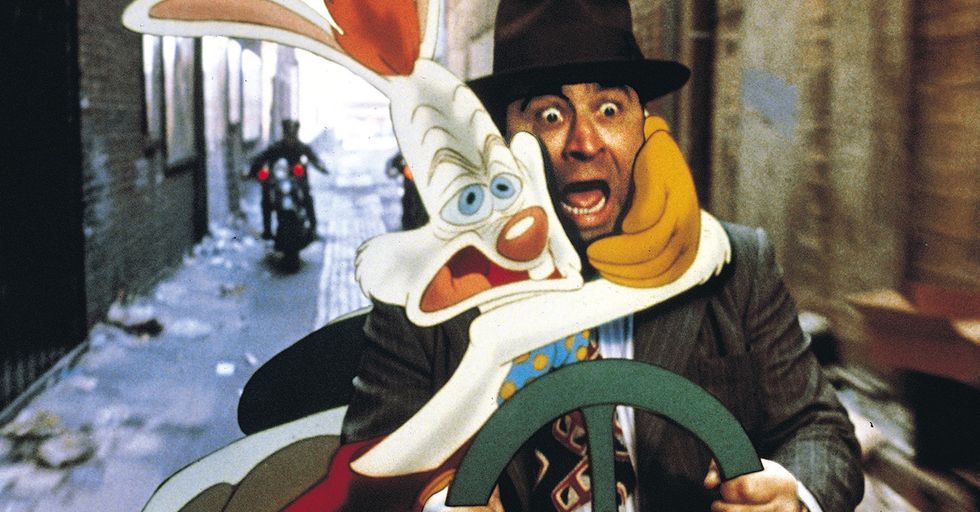 When you watch a movie as a small child, it likely has a strong impact on you. Do you remember the first time you watched a movie? It was a magical experience. When we think back to our favorite movies when we were little, we're often overcome with feelings of nostalgia and comfort. I cannot tell you how many times I watched The Jungle Book when I was a little kid. I'm sure my parents were sick of that movie by the hundredth viewing.

However, there are some movies for children that make you say, "Hmmm. Wait a minute. That's pretty dark." And there are a shockingly large number of scenes cut from kids' movies because they're simply too messed up. Can you believe that there were scenes cut out of beloved movies like Toy Story and Bambi because they were way too disturbing to make it to the final cut?

Keep reading to find out which terrifyingly dark scenes were cut from beloved children's movies. You won't be able to watch these flicks without thinking of these weird scenes that were axed.

Everyone has their favorite movie they watched as a little kid.

Most of them are filled with magical tales of hope and are likely accompanied by songs that are impossible to get out of your head.

Even as an adult, it's easy to enjoy a movie typically made for children.

It's because children's movies often tell stories that we're familiar with. Whether it's about the underdog preserving or good winning out against evil, we can all relate to children's movies, no matter our age.

They absorb everything they hear and see. They're especially impacted by the movies they watch.

We all remember being a little kid and watching a movie...

And then something happens that sticks with us and we can't shake it no matter how hard we try. Even if we're too young to fully understand.

Like when Atreyu's horse dies in 'The Neverending Story.'

This was the most devastating scene in a movie I had ever seen when I was little. Who else was traumatized by this movie?

Or the entirety of 'Dumbo'.

This movie was so dark and sad that it physically hurt to watch it as a little kid. The re-make looks just as sad! Those big, innocent Dumbo eyes are heartbreaking.

There was also that moment when Mufasa died in 'The Lion King'.

Who else sobbed in the theatre when they saw this for the first time? And then sobbed every time you watched it? It will always be devastating.

The "child catcher" from 'Chitty Chitty Bang Bang' is horrifying.

This surely gave a ton of children many, many nightmares. Why would they leave this in the movie? It's not even close to being as disturbing as some of the things they were forced to cut out of kids' movies, but we'll get to that in a bit.

'Return to Oz' was horrifying.

Considering watching Return To Oz tonight, just so I can be scared out of my wits all over again. #wheelers
— pollárik (@pollárik)1555069408.0

If this is still disturbing for adults, imagine how awful it was to be a child and see it for the first time. No thanks.

This movie should come with a warning.

And the warning should be, "Only watch this movie if you want your heart and soul ripped out of your body." None of us were the same after watching this.

'The Fox and the Hound' might be the saddest of them all.

This movie is truly traumatizing to watch as a child, as an adult - at every age! Why would anyone think this movie would be good for children?

The point is, there's a lot of sad, disturbing stuff in kids' movies.

Sometimes, scenes will get completely cut from children's movie because they're just too darn sad, disturbing, or inappropriate.

They cut out parts of 'Toy Story' where the character of Woody is just really mean.

Woody is a straight-up psycho in this original storyboard. He viciously throws Buzz out of Andy's window and is super mean to Slinky. Thank goodness they reworked Woody to be much more loveable (not without his faults, of course, but at least he's not cruel).

There's a bizarre scene where E.T. watches Elliot's mom sleep naked. They cut it from the movie, thank goodness. Nobody has time for a creepy E.T.

A scene where Elsa tortures guards in 'Frozen' was cut.

Elsa is an ice queen, but this scene where she tortures guards is next-level cold. Villain Elsa would have made for quite a different experience.

'The Mask' was definitely edgy fun, but Peggy's brutal murder was cut from the movie.

The director apparently cut this scene because he thought it would be too terrifying for younger audiences.

Disney decided to cut a scene in which Stitch basically kills Pudge the fish. In the scene, Lilo and Pudge are attacked by seagulls, and Stitch just watches, laughing maniacally. It makes Stitch seem sadistic.

Potty humor was cut from the live-action 'Beauty and the Beast.'

In the live-action Beauty and the Beast, a crass joke was cut. It makes you nauseous if you think about it for too long. Monsieur Toilette, after being changed back to a human, says he wants to brush his teeth. Gnarly.

As if it wasn't already weird that they made Geppetto's fish have sexualized features, there was going to be a scene where Geppetto almost eats her.

This scene is incredibly sad and was ultimately left out of the movie. The acting is unbelievable, despite the depressing scene.

This very creepy scene in 'The Lion King' was cut.

There was a scene where Scar creepily tries to get Nala to marry him. Scar then sings a different version of "Be Prepared" that is much more disturbing than what made it to the final cut of the movie.

'Who Framed Roger Rabbit' had a scene that looked like it should have been in a Stephen King movie.

This pig head scene was cut from the final movie, but the image will be hard to get out of your mind.

A "taming party" scene was cut from 'Zootopia.'

In this depressing scene, young animals are given a "taming collar" to wear and they must recite, "With this collar, Zootopia accepts me." It's a really somber, sad scene. Only watch if you want to weep.

Thank god they cut the very graphic, tragic death of Bambi's mom from the final movie. It was awful enough that she actually died! Disney really knows how to pull on your heartstrings.

This weird scene in 'Home Alone' was cut.

In the scene, Kevin's uncle decides to pants him. It's just so weird and inappropriate.

They wisely kept this scene from 'Back to the Future' out of the final cut.

In the scene, Marty is afraid he'll come back to the future but he'll suddenly be gay. That scene may have flown under the radar back in the '80s, but it definitely wouldn't age well. No thanks.

'Babe: Pig In The City' was a lovely movie that almost included a graphic injury and death.

Mr. Hoggett was originally supposed to be killed off in this scene. Not Mr. Hoggett!

There are so many wonderful children's movies out there.

We all have our favorite movies that we grew up with, which we watched over and over again until the VHS was nearly destroyed.

But there are just some things that are better left out of films.

Who knew children's movies had so many disturbing scenes in them? There's no denying that these movies would have quite a different vibe if the director had decided to keep these scenes in.

Regardless, there are still amazing, beloved children's movies out there.

Do you remember being emotionally scarred from a movie you watched as a kid? What's a scene in a movie you can never forget, or still freaks you out to this day?