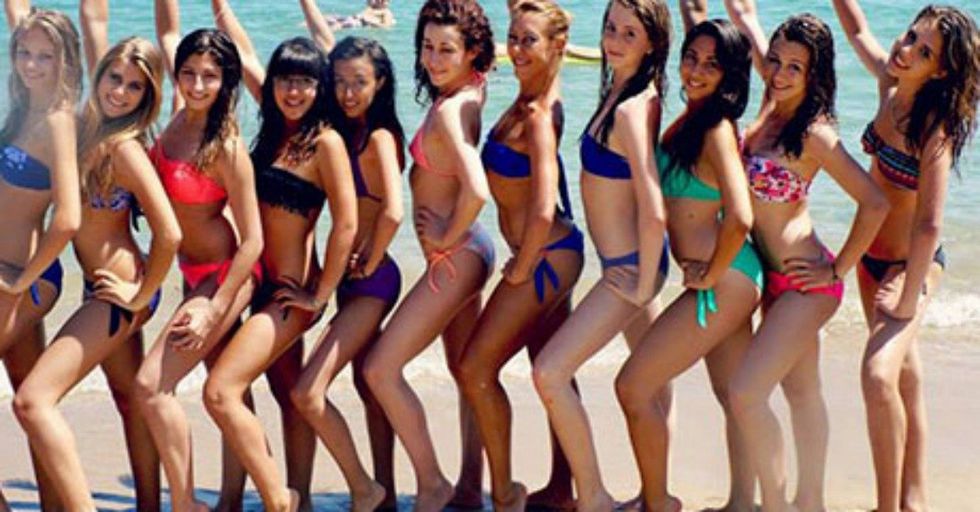 These Seven Photos Are All Hiding a VERY Creepy Detail

Being on the Internet all the time can jade you a little bit. Your eyes quickly scan over words and images without giving them a lot of time or consideration.

Well, that's all about to change, because the pictures that you're going to see might look simple enough, but they're all hiding one — shall we say — interesting detail.

So take your time with these and see just how attentive you really are...

At first glance, it just appears to be a bunch of girls on the beach, but do you notice anything weird about how they're posing?

Hint: Look at the guy behind them.

All the girls in the picture have the same face as the photobomber behind them. Yeah, super creepy.

Let's move on to this:

At first glance, it appears to be a full auditorium at a university filled with students. There's one student in particular though, that makes this anything but ordinary.

In fact, it's a four-legged friend just kind of hanging out with the students. Let's be honest — every class should have at least one dog. In fact, there should be a student-to-dog ratio of at least four-to-one.

Moving on to picture three:

It looks like a pretty typical class photo with everyone striking a pose the way they should. Each student is doing what they are supposed to do...except for one. And no, there's no dog in this picture.

But there is a bird.

Two, actually, in the form of that student subtly sending a message to, well, everyone, that he's a rebel and wants everyone to know it.

Middle fingers aside, we have this.

It seems to be two happy parents with their four smiling young kids. It's a pretty standard family portrait, right? Take a closer look...

They tried to cushion the blow — literally.

I don't know what that family member did to have everyone squash them and get cut from the photo, but I kind of want the backstory on this one.

Moving on to the beach.

Here we have your typical, "We at the beach! Let's take a picture! Everyone strike the same pose so we can post it on Instagram!" shot. But they got a little surprise in the picture.

Dude in the back really wanted to be a part of their squad. Or just bomb their picture. Either way, mission accomplished, my friend.

Now we go to the wedding.

Aww, what could be sweeter than a bride and groom up at the alter, exchanging their vows and the rings? But what if one of them got cold feet...?

That was your hint — feet.

Sure, it's probably just all in good fun and he's actually really excited to be tying the knot, right? Right?!?!

Last but not least:

These three guys have some pretty impressive Halloween costumes, don't you think? Take a good long look at them and see if you can figure what's a bit off.

There's actually a fourth guy just kind of hanging around dressed as a tree or a bush or something hiding there on the side. If I saw this in person, I would probably crap kittens. So be honest: how many did you get the first time around?