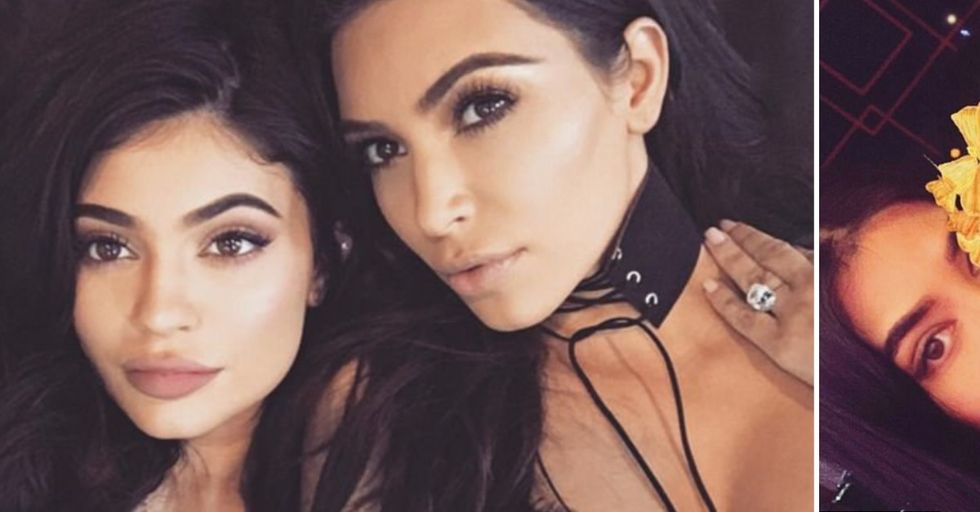 Hey, you know the Kardashians, right?

Come on. You can admit it.

Whether you're willing to admit it or not, you probably recognize this duo as Kim Kardashian West and Kylie Jenner.

They're famous for doing...something, including Keeping Up With the Kardashians and inspiring people all over the world to emulate their looks. This is the last picture you'll see of them here, and I point that out because the rest of the pictures you're about to see might freak you out a bit.

Now it's time for a mind-blower.

Take a close look at the following photo. Go ahead, take your time.

This is not Kim Kardashian West and Kylie Jenner.

No, this is Sonia and Fyza Ali, a pair of sisters/beauty bloggers from Dubai who are understandably mistaken for the famous duo all the time.

Believe it or not!

Their resemblance is completely uncanny, as a side-by-side comparison (if you needed one) will reveal. But what's equally impressive is how they've leveraged their similar looks to gain success in their own right. It's a classic tale of art imitating life.

Not only is their resemblance to the Kardashian clan as striking as it is. It gets even weirder.

The thing is though, they claim that they've never seen an episode of the show and that the resemblance is purely coincidental.

The sisters, who were born and raised in the UK, are often mistaken for members of the reality TV family, even though they’re successful makeup artists and bloggers in their own right. They specialize in creating tutorials for Middle Eastern women, and they have an impressive Instagram following of more than 580,000 people.

“Our close friends and family are so used to seeing us they have never seen a resemblance," they told Emirates Woman.

“It’s only when we are out together people constantly point it out — people that don’t know us at all! — especially in the States," they told The Daily Mail.  That's not to say they don't draw inspiration from Kim and the rest of the clan, though.

But once the resemblance was pointed out to them, they went with it.

They don't deny the accentuation after the fact. They even got some press coverage for it. because the press just LOVES any and all things Kardashian, don't they?

Fyza, who is a trained makeup artist, often recreates Kim-inspired looks on Sonia.

Sonia told The Daily Mail, "My sister and I love Kim Kardashian's makeup. Fyza likes to experiment with celebrity-inspired looks on me so we have recreated her looks a few times." "Companies have sent us Kim-inspired outfits, but only once or twice we agreed to wear and advertise for them, which is why you will see some similar clothing items." "As for her fashion, I don't really take inspiration from her outfits because our bodies are different and what she wears wouldn't flatter me," she said.

Like the Kardashian's they credit much of their look to their genes and lineage from abroad.

The sisters, who have a Turkish mother and Iraqi father, said they draw most of their beauty inspiration from the Arab world.

Their beauty tips often revolve around Arab-specific scenarios, like how to keep their skin healthy during Ramadan.

“We can’t drink water during the day so it makes our faces look drained and tired," the sisters said. “Face masks that have brightening and hydrating ingredients are a must! It makes makeup application so much smoother and long lasting."

But their overall message applies to people all over the world.

They recently had some interesting words about the middle Eastern culture and its relationship to the fashion industry.

“All the beauty trends you see on the runway have been in the Middle East for generations," they said, adding that they fell into blogging because they “both share a passion for beauty".

“We decided to help women around the world while we were learning ourselves at the same time," Sonia said. “We just want to spread positive energy to women across the world through our love for what we do." So what do you think — do you see the resemblance?

The Kardashians are officially so famous that even people who look like them can become famous. It's not surprising, but it's still pretty crazy! What a world!