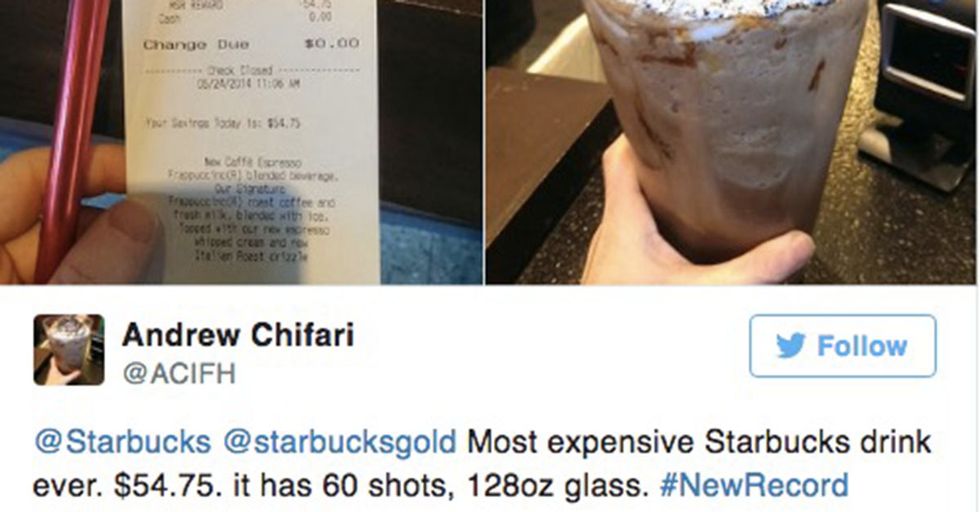 We all know that ordering a cup of coffee has gotten a lot more complicated (and expensive) since Starbucks came to town in the past couple decades.

But while you think your "skinny one-Splenda latte" might be high maintenance, you're wrong. Some people are going out of their way to create the most insane, over-the-top Starbucks concoctions you've ever seen. And other people? Well, some people are just really high-maintenance. Either way, they're all a barista's worst nightmare. See their crazy concoctions below.

With so many ingredients, flavors, and strange add-ins (cookies, anyone?) you can really go overboard quick if you're feeling inspired.

See? This isn't even half as crazy as things can get.

Imagine being the person taking the order....

25 pumps of caramel sauce!!!! Why not just get it hooked up to your veins?

Or the person behind this customer in line...

This is Jennifer's order. She's a giant pain, if only because she doesn't ALWAYS order the same thing.

Or the barista in charge of creating these monstrosities.

I bet it's easier to bake a cake than to make some of these nutso orders.

Man, she's gonna get diabetes if she doesn't get murdered by the people behind her in line.

Did this person really order stevia AND sugar into their drink?

Blueberry topping? Are we at a Cheesecake Factory?

Their daily coffee habit is more than most people pay in rent. I wonder if they have to staff a dedicated person just to make this insane drink every day.

But here's our winner. The crown prince of terribly complicated Starbucks orders.

Of course, by the time you read this, someone else will have taken the title, but it's good to be the king of crazy orders, if only for a day. SIXTY SHOTS! Talk about going out with a bang!