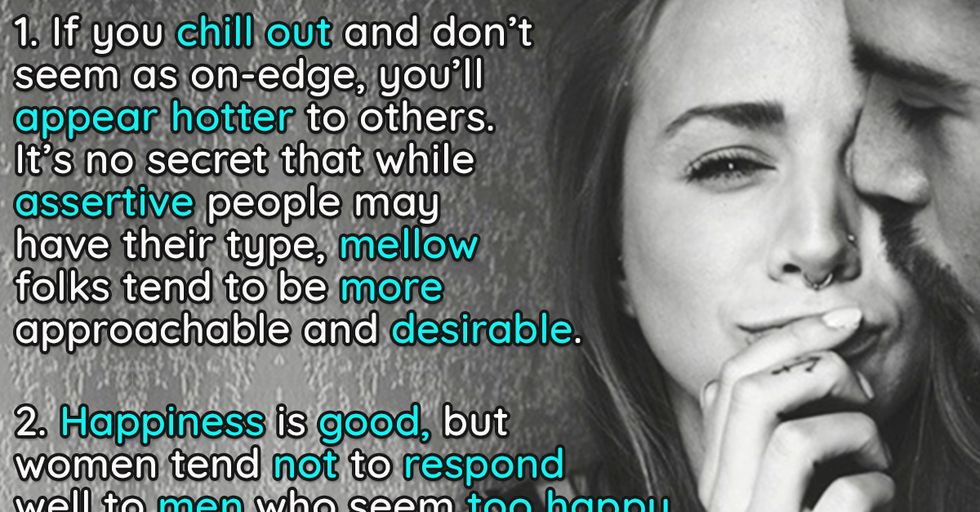 Whether you're single or not, odds are good that you still seek to be attractive to others, right?

Well, it turns out that a lot of who we are (and not just what we look like) can profoundly affect how attractive we are to other people.

via: We Heart It

So take a few cues from the scientific studies below and learn how to keep your unattractive qualities to a minimum!

Not only does sleep deprivation flat-out make you look less attractive, but sharing that info with other people will cause them to see you as less healthy, sadder, and less responsible.

You'll also lack confidence when you're running on fumes.

And a lack of confidence will hurt you on all fronts as well, because, as we all know, confidence is sexy.

Nice guys don't necessarily finish last. A Chinese study found that people who were judged to be evil or mean rated far less attractive than those who weren't, even when all the people viewed were displaying neutral expressions. Also, the attitude in general can be a turn-off, but, as we know, not always.

You might be familiar with "power poses" which, when you open up your body to look big, you feel and appear more confident. It goes deeper than just striking a power pose though, of course...

It gives off the opposite effect to others, causing them to see you as less desirable. Even crossing your arms, hunching your shoulders, or slouching can give off that vibe, so go with more expansive poses to try to get the gals or guys.

If you chill out and don't seem as on-edge, you'll appear hotter to others. It's no secret that while assertive people may have their type, mellow folks tend to be more approachable and desirable.

A 2013 study found that stressed-out women (as measured by the presence of the stress hormone cortisol) were found to be less attractive by men.

Higher cortisol levels suggest less fertility, and thousands of years of evolution have instilled in us an attraction towards who we perceive to be the most fertile. Kind of weird, but evolution is evolution.

Looking Too Happy or Proud

Happiness is good, but women tend not to respond well to men who seem too happy. And while girls tend to go for a guy with a little pride, guys tend to shy away from women who exhibit pride.

Lacking a Sense of Humor

In 2009, a study was conducted that found a lack of sense of humor is far less desirable than a great sense of humor. That might not be a huge surprise, but if you think being stoic and business-like is the way to go...you might want to think again. And that goes for girls and guys.

It's no secret that appearing to have the energy level of a sloth isn't a desirable quality, but the cause of this phenomenon is what's more interesting.

It turns out that people who appear helpful are more attractive, and, naturally, a lazy person does not exhibit that characteristic.

A study of students in a six-week course found that their attraction to others in the course changed over time based on how helpful and/or lazy they appeared.

Smelling Too Similar to Someone...or Too Different

Sounds like a catch-22, right? Not quite. Humans seek out mates that aren't too similar nor too different genetically, and we establish their genetic differences through smell, largely. A 2006 study questioned people on how turned on they were by their sexual partners and how faithful they had been in a relationship. It turns out that the partnerships of similar-smelling people were less strong and driven by attraction than those who had different genetic makeups and smells. Yet this study says people who smell too different aren't attracted to each other as much either. So what do you do? Maybe take a cue from Goldilocks and find a scent that's just right.

No surprise here, right? Even innocuous things like lying about your age or income are major turn-offs to others. In a 2006 study, people were assigned characteristics like "honest" or "dishonest," "intelligent" or "unintelligent, and "dependent" or "independent." It was found that dishonesty was the only trait that had a substantial (negative) impact on attractiveness. So be honest. You'll have to come clean sooner or later if the relationship works out, anyway.