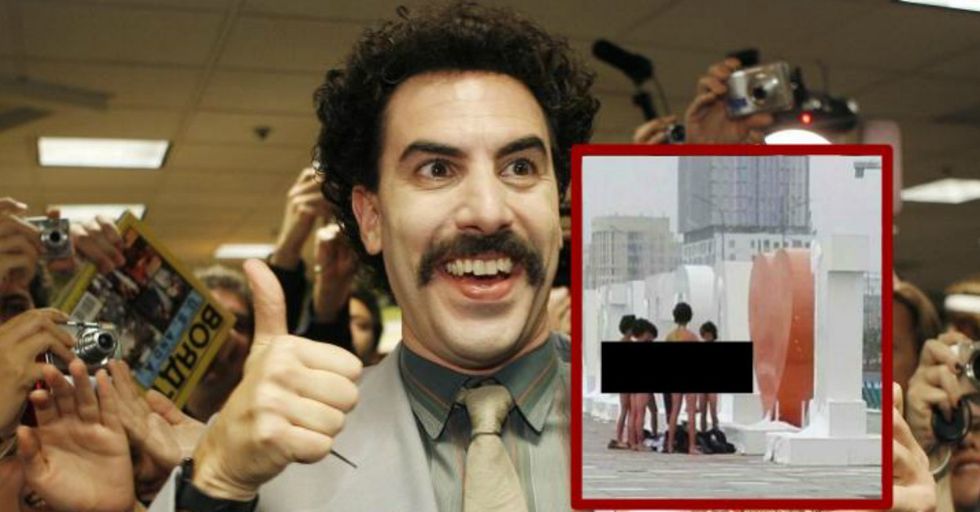 Eleven years ago, a movie burst into public consciousness, simultaneously titillating and horrifying the American public. It was called Borat: Cultural Learnings of America for Make Benefit Glorious Nation of Kazakhstan — Borat, for short — and it was created by one-man meme-generator and actor Sacha Baron Cohen.

We had never quite seen anything like it before.

Borat quickly became the source of the year's greatest memes.

Now, a little over 11 years to the day the film first came out, a new generation is embracing Borat's most lasting cultural legacy.

Last week, a group of Czech tourists were reportedly detained in Astana, the capital of Kazakhstan for "minor hooliganism."

What was their crime, you ask?

Wearing lime green mankinis and black wigs as they tried to take a photo in front of the "I Love Astana" sign, of course! Niiice...

The men had been trying to pay homage to Borat in the most Borat way possible.

But Kazakhstani officials, however, were not amused. They detained the men and fined them 22,500 tenge ($68) for their pseudo-obscene act.

All seemed very hopeless, and not "niiice" until a very familiar person stepped in.

Sacha Baron Cohen!!! He offered to pay for the men's fashion "don't" in a Facebook post: “To my Czech mates who were arrested. Send me your details and proof that it was you, and I’ll pay your fine."

The jokes on social media, as you can imagine, were relentless.

Six men from the Czech Republic got arrested in Kazakhstan for wearing Borat's classic lime green MANKINI! The m… https://t.co/IaxAt6KcrB
— The Showgram (@The Showgram)1510831771.0

Very not "NIIICE." In fact, why would you detain tourists for harmless fun, especially considering Kazakhstan is prime Borat country. Just sayin'.

Other people had problems with people still doing "Borat" jokes in 2017.