Isn't age three and five too young to be posing kissing a pretend spouse? | 22 Words 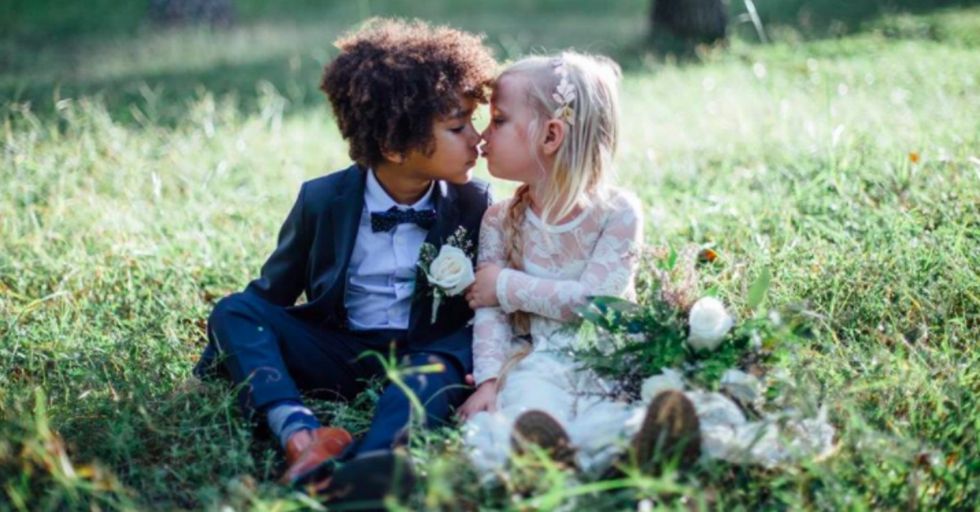 Okay so, these two moms are photographers, and they both enjoyed playing dress up as kids. They also liked pretending to get married when they were growing up. They decided to live vicariously through their own children by staging a mini wedding for them and taking pictures of them pretending to marry each other. Plenty of kids like to play dress up and even pretend to get married, but this staged photo shoot struck people as at least a little strange because:

a) the kids are so young

c) they clearly did it to draw attention to their business.

The girl, Ella, is three and the boy, Sullivan, is five.

Ella's mom told ABC News, "We told them they were getting married and found a little baby-sized ring box. I told her she got to dress like a princess for her wedding."

Breanna (Sullivan's mom) and Bria (Ella's mom) had worked together a few times before.

Breanna said, "I would die of happiness if they got married in the future." It's not clear whether the kids were friends before the pretend ceremony or not, but the marriage was definitely their moms' idea.

The photo shoot includes pictures of the kids holding hands, standing at an altar, and kissing.

Breana, one of the photographers, wrote in her Facebook post, "So as a kid one of my favorite things was to play dress up. I specially [sic] liked anything that was white because I pretended to be getting married. Well low [sic] and behold I am grown and married with a gorgeous daughter...."

She continued, "She loves playing dress up and has a wild spirit. My friend who also is a photographer has an adorable son who is Ella's friend from Sullivan and we had this wild idea."

"...We wanted to host a mini wedding and of course we went all out. We let these two play real life wedding and I think they had more fun than their mamma's did. Oh to be young again."

The moms said that the kids ended up taking things into their own hands. Sullivan asked to pretend to propose to Ella.

"They did pretty much everything themselves, then they’d look at each other and they would giggle," Breana of Breana Marie Photography said. Lots of people thought the photo shoot was adorable, but others questioned the motives behind it...

Breana posted the photos to social media and included the different brands that she and the other photographer used to prepare for the shoot.

They purchased a bouquet, boutonniere, tiny tuxedo and wedding dress, wedding cake, table, and other accessories for the event.

While many people on social media thought the photos were adorable, others were not pleased with their idea. This person thought it wasn't right that the photographers used their kids to gain traction for their businesses.

Whatever their real motivation behind this photo shoot was, it would have made a lot more sense for these moms to hold this photoshoot had it been their kids' ideas first.

Isn't age three and five too young to be posing kissing a pretend spouse?

While it may seem insignificant, even joking that a little kid is flirting with someone else can be creepy and downright strange. Making your kids go through the motion of an event as mature as a wedding is almost as bad. They're supposed to be carefree at that age, not romanticized or sexualized. On one hand, the kids may have just played along and not thought about it twice, but on the other hand, they may now have the idea that they have to see kids of the opposite gender as girlfriends or boyfriends and can't just be friends with them. Can't we just let kids be kids? What do you think? Was this photo shoot pure fun or could it have been done differently?