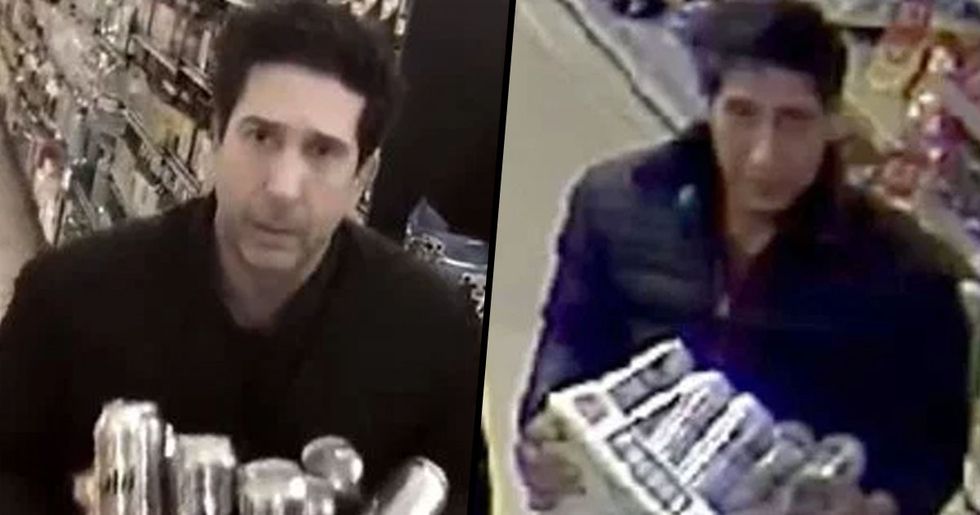 One of our favourite news stories from 2018 had to be the Ross-from-Friends thief. For those who missed it, a guy who looked surprisingly familiar was caught on CCTV stealing some beers from a shop in Blackpool, UK. Twitter couldn't get over the hilarious resemblance - and the story gained so much traction that the Hollywood star who played Ross even got involved.

However, the palaeontologist-lookalike seemingly can't stay out of trouble, and has recently found himself in hot water again after another theft - this time of a coat, mobile phone and wallet. He was due to appear in Blackpool Magistrates' Court in December, but didn't turn up and has not been seen since.

Now Blackpool police are appealing to the public for information on the man, sharing a photo of him to spread the word. And people have noticed something a little bit disappointing about the image.

In spite of it ending more than 10 years ago, Friends is still a hugely popular TV show.

Since its final episode aired in 2004, Friends has found a home on Netflix - which explains how it has remained such a part of the cultural zeitgeist.

For those who (somehow) missed it, the show revolved around a gang of six twenty-somethings.

They were Chandler, Monica, Phoebe, Joey, Rachel and Ross - a combination of characters that endeared themselves to audiences and allowed the show to run for ten seasons.

The lineup would not have been complete without Ross.

He was a lovable weirdo with almost perennial bad luck. Ross worked as a palaeontologist, had a young son named Ben,  and was known for being just a little bit neurotic and nerdy.

He was also a genius at spinning a catchphrase.

His "I'm fine" episode was one of his finest - no matter how hard he tried, he was unable to conceal his distress at Joey and Rachel's new relationship.

Because we always knew Ross and Rachel were meant to be together.

Their on-again, off-again relationship was one of the reasons Friends was so popular - people couldn't resist tuning in to see what would happen to these two tortured soulmates.

Sure, Ross had some downsides.

In fact, since the show ended, many have pointed out some of his more toxic behaviour, particularly towards Rachel. His three divorces (plus insistent defensiveness about them) didn't help his case.

But as far as we know, Ross was never a thief.

But, back last year, it seemed perhaps Blackpool Police knew something we didn't.

They shared a video of a man stealing a crate of beer from a shop in Blackpool. And many people thought the face looked a little bit familiar.

The resemblance between the CCTV footage and the palaeontologist (or, at least, his doppelgänger) was uncanny.

Shots from the show certainly cemented the similarity.

Here's the thief alongside both Ross and Russ - we have to admit, there's a striking resemblance in these photos.

People couldn't get over the similarities.

Even those who know Ross (or, at least, actor David Schwimmer) in real life thought the thief looked just like him.

"Apparently the police had him cornered then he performed a pivot manoeuvre and escaped" 😂 (Police have confirmed… https://t.co/jdjUq8zZ21
— BBC Newsbeat (@BBC Newsbeat)1540361373.0

Because of the cult following Friends has, there were plenty of in-jokes to be had about the incident. One surprisingly came from the BBC!

Another offered condolences, saying "I just hope his friends are there for him." One Twitter user offered, "His mother warned him there'd be days like these."

We love it when the community collectively jumps in on a joke and it just keeps on getting funnier.

Of course, there was no way the thief was actually David Schwimmer, right?

Police (jokingly) confirmed he hadn't been in Blackpool at the time of the crimes, so was off the suspect list for now.

Unbelievably, Schwimmer himself got in on the joke.

The actor posted a video of him mimicking the thief's actions, all with the hashtag #itwasntme.

People were super excited that Schwimmer had responded.

After all, it's not every day that a Hollywood actor comments on some local news from Blackpool - and makes a video about it, no less!

Including this Tweet, a reference to the letter Rachel wrote Ross about everything he did wrong during their relationship, which is a personal favourite.

We're also a fan of this "confused Ross" response.

It refers to the time where Ross can't quite recall whether or not he has proposed to Rachel after a long, sleep deprived night.

We highly recommend a read of the full thread, if you missed it at the time and are in need of a good laugh.

No internet story would be complete without some memes.

This poorly Photoshopped edit, including the thief in an old picture of the Friends gang, is among the best from the incident.

It can't just be us who has been massively endeared to David Schwimmer after his hilarious participation, right?

Anyway, the story has recently come back into the collective consciousness.

The "Ross Geller thief" has been in trouble with the law again, having not been found after his beer-stealing spree.

The man was in trouble for a new robbery this time.

He had reportedly stolen a coat, mobile phone and wallet outside a restaurant in Blackpool. He'd also failed to turn up to Blackpool Magistrates' Court.

BBC Lancashire shared the news of the man.

Abdulah Husseini - arrested after a police appeal for a Ross from Friends "lookalike" went viral - is being sought… https://t.co/ADVrN64qVk
— BBC Lancashire (@BBC Lancashire)1548068345.0

He's been identified as Abdulah Husseini - so, definitely not Ross Geller. But people couldn't help but notice something about these images.

When compared side by side, the two men have almost no physical features in common. It's bizarre that people thought the two were identical!

So how did everyone end up so convinced?

Well, we have one theory. The video that Schwimmer made in parody of the original CCTV may have ended up being confused as the original footage. Check that BBC tweet - they used the Schwimmer footage rather than the original.

Regardless of the "Ross" situation, justice has been served.

A man wanted by police after failing to appear at court has been arrested. Abdulah Husseini, 36, was due to appear… https://t.co/UINNrvScqG
— Blackpool Police (@Blackpool Police)1548079964.0

The thief has been arrested in London - although we have no news yet on his upcoming trial.

We were so hoping the guy would turn out to be a Ross doppelganger, and that Twitter's joke storm could have been the key to tracking him down.

Us, pretending not to have seen the new pictures.

We think we'll collectively pretend that this similarity is as strong as the initial footage suggested - at least for now. It's just more fun this way!