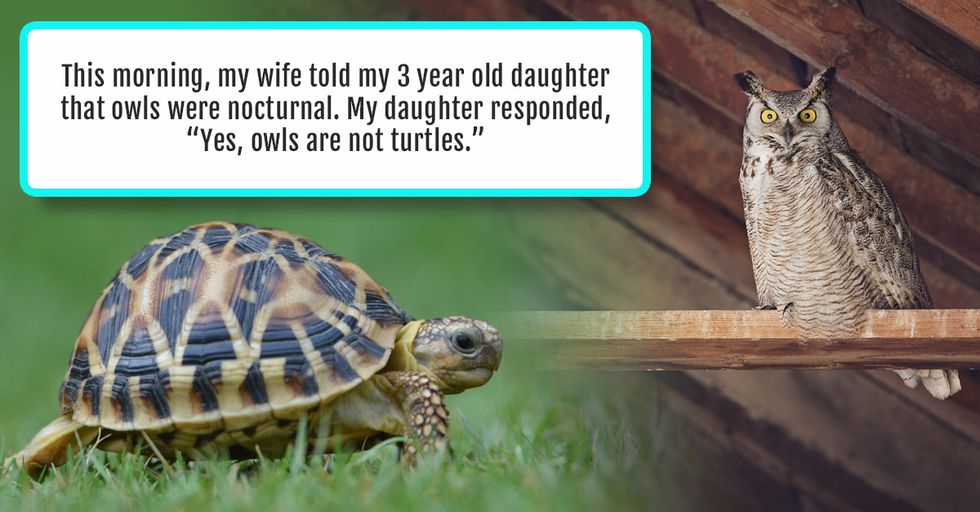 If I've learned one thing in my adult life, it's that I will never live up to the comedy level that little kids have.

They might be the funniest versions of themselves when they are young and have no filter whatsoever.

I am not sure where they get these stand up comedy bits or clever insults, but man, am I thankful that they say the things they do.

3-year-olds are savages and no one is safe from their jokes.

"I took my boyfriend's 3 yr old to the zoo once, and while we were passing by the tigers I said, "Aww, he's so cute. I just want to give him a hug." The 3 yr old stopped dead in his tracks, looked at me like I was a complete idiot, and said, 'Dabnabbit, that tiger would eat your face."" @dabnabbit He is absolutely correct. Can't argue with his logic.
"My 3-year old nephew likes to play with his toy cellphone. He has great pretend conversations with his grandparents but evidently sometimes he doesn't like what he hears because he says, "Are you f***ing kidding me." and then hangs up." @thefeline Sounds like an angry phone call for sure. This is a three year old you definitely don't want to cross.
"When I was little, I apparently wouldn't stop talking so my Mum said to me, "Could you just draw a breath!?", and I replied with, "If you get me a paper and pencil I can try"." @jadlad Now that's a clever three year old. I wouldn't even be mad with a comeback like that.
"When my little brother was a wee lad, he asked for a pellet gun. My mother asked him why he wanted it, so he thought for a moment and said, "To tie up some loose ends." I love that kid." @missingsf Seeking revenge on all the kids that stole your snacks during nap time. Not a bad idea. Share this story if you know some parents or friends who have heard their darling little angels say some savage jokes. This stuff is too hilarious not to share.