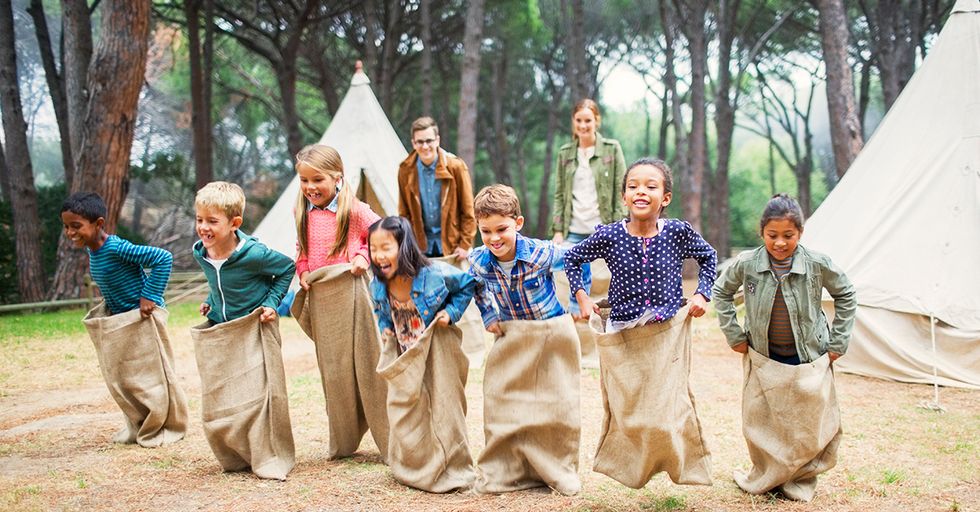 19 Things All '90s Kids Did Over Summer Break

If you were a kid in the '90s, you experienced peak children's television, toys, fashion (yes, seriously), and honestly, everything else.

The only thing that made summers in the '90s better than the rest of the '90s was that you didn't have to go to school.

You got to spend two whole months doing whatever with your friends. And oh boy did we have some adventures. Here are 19 things you definitely did during the summer if you grew up in the '90s...

Some of us braved the local days camps. Others spent whole summers away at sleepaway camp. Whichever you experienced, it was always hella weird when your camp friends and your school friends met each other.

Macrame, string, or lanyard was our material. Keychains, friendship bracelets, or chokers were our game. We knew a bunch of stitches and we were experts in all of them.

Everyone in the '90s dressed like we lived on the beach and surfed professionally, which none of us did.

Got braids on vacation

'90s kids were our name, and cultural appropriation was our game! Seriously, too many white kids got braids while they were in Aruba with their family. The next one will really hit you...baby...one more time...

Or MTV Real World marathons. Or Nick at Nite marathons. Or Disney Channel marathons. Sometimes it was too hot to do anything outside. Luckily, the television was an endless source of entertainment.

There was not a part of our body that we would not adorn with metal in the 1990s. Our toes were particularly ripe for rings in the summertime. Look, we all made mistakes.

We couldn't very well have tan lines, could we?! And tube tops, especially those bubbly stretchy ones that were the size of an iPhone before you stretched them over your body, were a staple of '90s summer fashion.

When parents left for summer vacations and left their children behind, they obviously threw house parties the second they were alone. A lot of sweaty bodies drinking crappy beer by the pool in the backyard... Those were the summer nights of our youth.

Go to the mall

Grab an Arizona Iced Tea at the deli

The deli or the pizza place was the chose food-centered hangout of '90s kids, and we were never without one of those cans of Arizona Iced Tea...or Snapple, Capri Sun, Yoo Hoo, Orbitz, Fruitopia, etc.

Slather ourselves in tanning oil

We had no excuses, but in the '90s we still weren't quite aware of the harrowing effects of frying our own bodies in the sun.

Hang out at pool parties

If you had a pool, you hosted all the kids in town. If you didn't, you desperately found a friend with a pool so you could swim and play Marco Polo and cool off.

Played in the sprinkler

If you were sadly without a pool invite on a hot day, the yard hose was your best friend. You could hook it up to the sprinkler and run through it, slick up your Slip 'n' Slide, or fill up your super soakers for a dangerous water fight in the yard.

Hit your friends up on AIM

AOL Instant Messenger was your gateway to the world in the '90s. You could chat with all your friends, make plans for later, and choose the perfect lyrics for your away message. The next one is a true blast from the past...

Rent some movies to watch at home

Our Blockbuster was way on the other side of town, so my video store was the rinky-dinky Captain Video. But it was the best. You could movie marathon it up with your friends. All you needed was a bunch of VHSes, some popcorn, and like, endless amounts of M&M's and Twizzlers.

We knew everything. Spit, Egyptian Rat Screw, Crazy Eights, Rummy, Gin Rummy, etc. Cards were always a reliable go-to if you were out of ideas.

As '90s kids, we spent a lot of time outside. On wheels. That were actually really dangerous. Rollerblades, bikes, scooters, skateboards...whatever your vehicle, you definitely skinned your knees. It was awesome.

Cooled down with some ice pops

Otter Pops are maybe the best invention ever invented. Except for the fact that in order to enjoy them, you needed a pair of scissors. And they cut up the sides of your mouth. You know, come to think of it, these things are really dumb.

Run after the ice cream truck

Don't lie: Your heart still skips a beat when you hear the twinkly music of an ice cream truck off in the distance. We're conditioned for life. Share this with your favorite '90s friend!