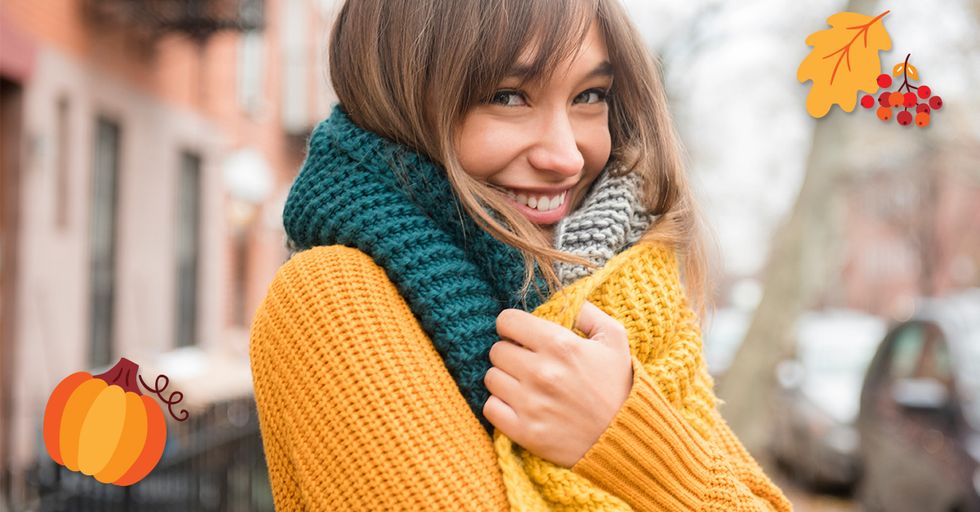 It's that time of year, folks! The leaves are falling, the pumpkins are spicing, and everything is becoming extra spooooky! It's fall! Fall is here, it's finally here!

If you know what's good for you and are not a crazy person, you understand that fall is, by far, the very best season of them all. Don't get me wrong — summer is super fun, spring is delightful, and winter has a bunch of fun holidays. But fall? Fall is where it's at, my dudes.

If you agree, then you don't need any further convincing. Assuming you're on board with the whole "fall is the best thing ever" idea, let's just go ahead and move on to our list of all the great things about the season we all love.

(And if you're not a fan of fall, keep reading! I think I might be able to sway you to the autumnal side.)

So, light a cozy candle and put on some fuzzy socks.

Because fall's here. And we're ready to love it. In no particular order, here's everything that fall-lovers love about fall:

What's that? There's a slight chill in the air, but not enough of one to break out your down coat? Guess it's time for a sweater, then! For best results, get one that's a little baggy so you can nuzzle your whole face into it.

Speaking of nuzzling your face into comfy things, do NOT forget scarves. You can never have too many scarves. I don't care if your entire closet is literally bursting with scarves. It's not too many. You could use more.

OK OK OK. Are they basic? Yes. Are they also delicious? YOU BETCHA. Although, I must admit that I personally prefer the under-appreciated salted caramel mocha to the pumpkin spice. If you're here to hate on people who love a flavored coffee, you must have better things to do with your time, right?

If you ever meet someone who claims not to like it when the leaves start changing colors, that person is either colorblind, a psychopath, or a colorblind psychopath.

6. Stepping on the leaves!

Yes, this is separate from enjoying the colors of the leaves themselves. There is nothing — nothing more satisfying than the crispy, crunchy sound of the Perfect Leaf™.

Soup is amazing because it's a food and a beverage at the same time. Such versatility! If you ever make a slow-cooker soup and have it ready and waiting for you as soon as you get home from work, you'll understand just how amazing soup is. Also, you will see me sitting at your dining table, ready to eat.

Again, so much versatility. It's a pastry crust with a delicious filling. What's not to like? IT'S PIE, PEOPLE.

As soon as the calendar says "September," it's time to get ready for Halloween. I'm talking fake cobwebs, plastic spiders, costume planning, "The Monster Mash," the whole shebang.

Even if that actually means just watching Hocus Pocus over and over for a month straight. No judgment here.

Remember what we said about pies? Thanksgiving is a holiday that is basically just a chance for everyone to get together and have a lot of pie together. There is literally nothing better.

As I write this, I'm currently enjoying the pleasant aroma of a vanilla bourbon candle I got from Target last week. I also got a toasted marshmallow scent (that's my favorite), another scent called "Fall Day" (also very good), and then one called "Pumpkin Pinecone." Yes, I am living my best life.

Quick, name the coziest spice! If you said cinnamon, you're right, my friend. Cinnamon is amazing, and it really flexes its entrancing powers in the fall.

Going to an orchard to pick apples is an activity so wholesome and wonderful that I'm honestly kind of surprised it's not illegal. Enjoy it while you can!

Bonus points if the apple orchard you go to also offers cider (all the best ones do). Give me a warm cider and a cinnamon sugar donut, and I'm the happiest gal in the world.

I know we already covered Hocus Pocus, but can we also just take a sec to appreciate When Harry Met Sally which, while it takes place over several years, and features all the seasons, is nonetheless the quintessential fall movie? OK, thank you.

Socks are basically scarves that you wear on your feet, so obviously they are added to the list. As someone who has popsicle toes even in the middle of June, I really appreciate a good fuzzy sock. Or two.

I may look like Al Borland from Home Improvement every time I wear a plaid shirt, but you better believe that I wear them anyway. 'Tis the season!

You know that feeling when one of your friends calls you up and invites you to an impromptu bonfire at another friend's house? I'm pretty sure that's the definition of happiness.

It is chocolate that you can drink. Do I really need to expand on this one?

During the fall, if something's not pumpkin spice-flavored, you can bet it's because they went with caramel instead. Salted caramel? Even better. Put it on everything.

A rainy fall day is the best kind of day. Do not @ me.

I live in Southern California where it is warm all the time. And I still cuddle up under a blanket every. Single. Day. So yeah, blankets are my jam.

Beyond the standard pumpkin, you've got so many knobbly, bumpy, warty gourds to choose from when it comes time to do some seasonal decorating. They each have their own type of character!

I love walking into the grocery store and being greeted by a display of mums. They're so colorful and cheerful and just perfect.

It's like the perfect combo of the way it smells after a rain, plus fresh dirt, maybe a little bit of campfire smoke.

Not just the leaves; literally everything that's fall-themed. Browns, oranges, reds, yellows, golds. It's all so luxurious and mysterious, and I wish the world looked like this for the entire year.

Because it's super classy. Don't pretend you don't agree. Share this with someone who loves fall almost as much as you do.