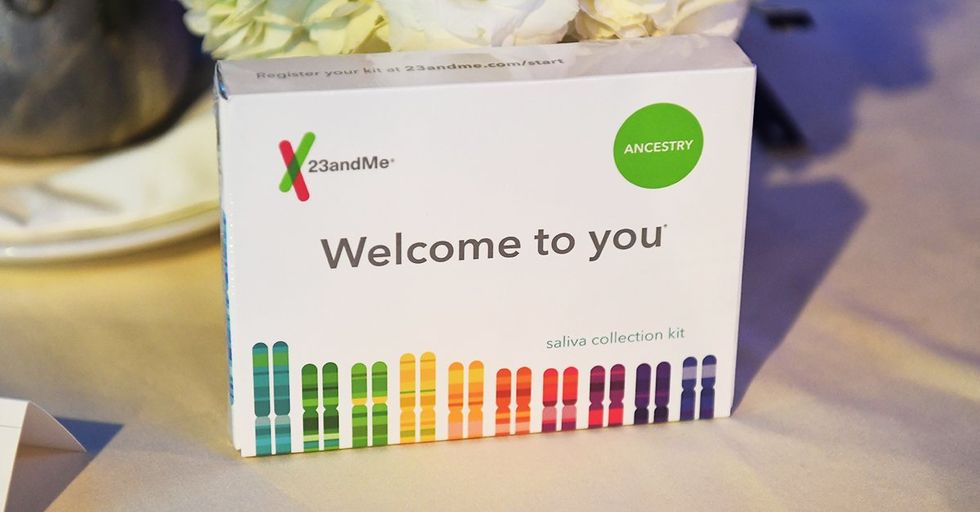 How well do we know our family trees? Depending on the family, genetic roots can get pretty murky, and sometimes we need some help in figuring out where we come from, According to popular home DNA testing companies, almost every person who orders a test finds something they don’t expect!

The following stories go beyond an unexpected place of origin, however. Some people uncover things that change how they view themselves, their families, and their whole worlds! What happens when you find a sibling you didn't know about? Or when you discover one of your relatives isn't actually a relative? It can change your life forever!

That's just what happened with the people in this story. Most of them sent out for a DNA test, just for fun, and got way more than they bargained for. Find out exactly what happened!

Karen Heiting found her family with an at-home DNA test.

The Chicago native was abandoned on the doorstep of a church in downtown Chicago as a baby. She was labeled a “Jane Doe," as there was no information about her out there. As such, Heiting never thought she’d be able to find any living relatives. But when home DNA tests became available, that changed!

She was able to send in her DNA to ancestry.com.

Through the test, Heiting got some shocking results. She had two half-brothers, Ed, and Ray, who looked just like her! Beyond that, she also found a number of other blood relatives (cousins) and discovered her bloodline wasn’t as lonely as it had seemed!

Before long, the siblings and extended family had agreed to meet.

“There was a party with all the cousins, and everyone wore a name tag saying how they were related to me," Heiting told TwinCities Press. “To walk in and look at my half-brothers’ faces, and eyes and bone structure — it was so overwhelming for me to see these people."

One man discovered his relation to a famous U.S. President!

James Pylant’s four DNA tests from 23andMe, MyHeritage, Ancestry and Family Tree DNA all provided some fascinating proof. According to Pylant, the tests confirmed his family’s relations to Abraham Lincoln!

Catherine St Clair got some bad news from a customer service rep.

When St Clair got her DNA test results, she discovered that the man she thought was her brother was actually only a half-sibling—and that she didn’t genetically match anybody on her father’s side. Her biological father was not the man who raised her! She eventually found him; he was a stranger her mother had known over 50 years ago.

Through AncestryDNA’s website, she found a half-sister named Raetta, and after they got in touch, she learned of another named Mona. The three have since formed another family, even flying to Los Angeles together to celebrate Raetta’s birthday.

St Clair even created a Facebook group for people whose DNA tests came with a shocking twist.

The group is called “DNA NPE Friends," where NPE refers to “not parent expected." The group has over 1,000 members!

One member of the group didn’t get the result he hoped for.

Todd, a member of the DNA NPE Friends, messaged several cousins that he discovered through his AncestryDNA test. In response, they blocked him on Facebook. Sadly, not everybody gets the response they’d hope for when it comes to finding their biological family.

One woman got a test for her son, and made a discovery of her own!

Another member of the group, Lynn, ordered a DNA test for her son in order to find his paternal grandparents. Her husband had been adopted, so they didn’t have any information about his side of the family.

She unintentionally found out something about her father, instead.

While doing so, she compared her son’s results to her brother’s and found they didn’t look like a typical uncle-nephew pair would. Thus, she found out that her biological father wasn’t the same as her brother’s and not the man she grew up with.

Lisa, a member of the group, felt out of place with her family; she was darker-skinned and her hair was naturally fine and curly, although she always straightened it.

The DNA test gave her answers.

Her DNA test then revealed her biological father was likely African American, but her mother has refused to tell her about him. She didn’t push the matter, to avoid upsetting either of her parents.

The DNA test led her to a cousin in California. From there, she was able to find someone that she thinks is one of her grandparents, but she hasn’t yet been able to find a definite candidate who could be her father.

MyHeritage’s spokesman has an interesting relation.

Rafi Mendelsohn, who works for MyHeritage, learned through DNA testing that composer Felix Mendelssohn is a distant relative of his.

Dominick Miserandino ordered a test of his DNA from ancestry.com, and in doing so discovered that his old babysitter was actually his eighth cousin!

From there, he found more cousins.

After that, Miserandino found other relatives, and eventually took a trip to Canada to meet the distant cousins he had found through the test. “Since then, we’ve been very much in touch, we FaceTime and we’ve had these great moments," Miserandino told TwinCities Press.

One woman had never met her father but thought she knew who he was.

Tracy Tennant was given information by her mother that led her to believe a certain man was her father. She’d never met him, though his name was on her birth certificate. When her mother died in 2014, she reconnected with him.

The results were shocking: they weren’t related. Tennant’s real father was a failed Hollywood actor (and married, too), who’d died in the ‘80s. She also found half-sisters through the DNA test!

Get ready for this story: a DNA test solved a 100-year mystery.

She already had an idea of what she’d get in the results.

Instead, something strange happened.

While half of her DNA was indeed mixed British Isles from her Irish ancestry, the other half contained a large amount of European Jewish, Middle Eastern and Eastern European DNA.

Her DNA results made Plebuch assume there had been a mistake.

While she initially wrote to the company, insisting they’d made an error, Plebuch and her sister agreed that she should take the test again.

They both got tests from 23andMe.

Plebuch and her sister ordered tests, wondering if maybe their mother or grandmother might have had an affair. It seemed unlikely, as all of their siblings shared features belonging to their father. Their father, on the other hand, had been sent to an orphanage along with his two siblings when their father died, and he’d been cut off from his extended family for most of his childhood.

However, Jim Collins had always been staunchly Irish.

It seemed equally unlikely that Jim Collins would be Jewish. His parents were Irish immigrants who brought him to the United States. So Plebuch and her sister persuaded two of their cousins to also get tested: their mother’s nephew and their father’s nephew. That way, they’d know for sure where the strange DNA was coming from.

Then, her new results—and her sister’s—from 23andMe returned.

As with the previous tests, these results pointed to Ashkenazi Jewish ancestry—from areas like Belarus, Russia, Ukraine, and Lithuania. Plebuch’s brother, by coincidence, had also recently taken a test—and his results were the same. So, Plebuch wasn’t adopted.

The answer went all the way down to specific chromosomes.

When it comes to gender, females inherit one ‘X’ chromosome from each of their parents. Males only inherit one, from their mothers, and get a ‘Y’ from their fathers. Plebuch’s brother’s DNA test cracked the case: his ‘X’ chromosome was purely Irish. The Jewish ancestry came from Jim Collins.

But what did that mean for Plebuch’s father?

When their cousin’s tests came in, they discovered that her father’s nephew wasn’t actually his nephew—or their cousin—at all. No genetic overlap whatsoever between them. It also meant their father wasn’t actually related to his siblings or his parents. The rest of the family was Irish Catholic. Jim Collins, somehow, was Jewish.

As it turned out, another family had the same problem, reversed.

After some investigation, Plebuch discovered through searching 23andMe’s genetic data that a complete stranger showed up as a close relative of her cousin—the one she wasn’t actually related to. The woman had discovered that she was actually Irish when she’d expected to find entirely Jewish DNA; the exact opposite of Plebuch.

In conclusion: Plebuch’s father had been switched at birth.

The birth certificates for Jim Collins and one Phillip Benson were one number apart and signed by the same doctor. They were born in the same hospital in 1913, when procedures for identifying babies were inconsistent, to say the least. As such, the baby who was supposed to be Phillip Benson was given to the Irish Collins family and named Jim. In turn, the baby who would have been Jim Collins was given to a Jewish family and named Phillip.  Now, the two families are one big ‘swap’ family. After solving a mystery over 100 years old, the world has gotten a little bit smaller for these families! Do you want to try a DNA test? Share these insane stories with your friends!