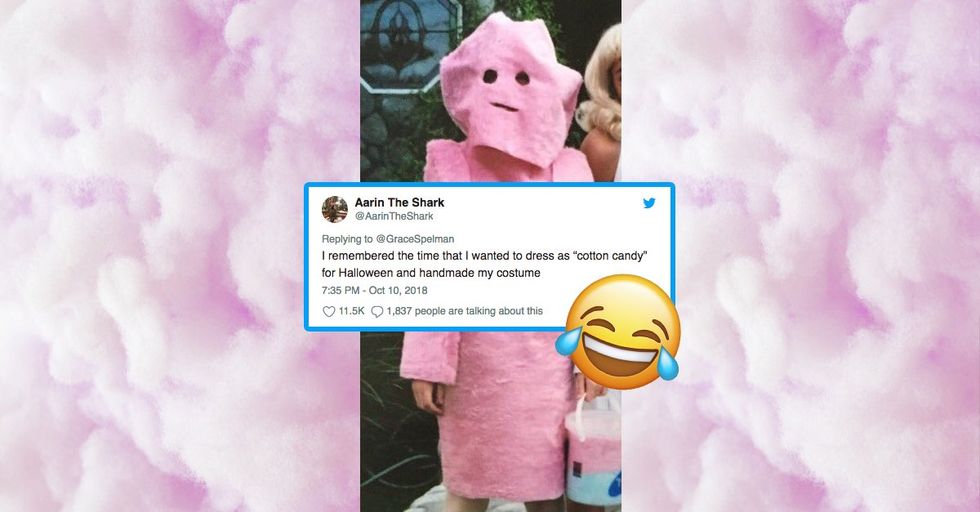 Listen, I know you are skeptical. I know you think there is no way that all 29 of these stories will make you laugh so hard you will cry actual tears. But I am here to tell you that I was once like you. And I am like you no more.

Grace Spelman asked the people of Twitter to share real-life stories of times that they laughed so hard they cried. There was only one stipulation: It had to be real-life situations and not from TV, movies, or the Internet. And, I will have you know that the people of Twitter delivered handily. Spelman's tweet got nearly 4,000 responses, and they are all glorious in their own ways.

When I started writing this, I was like, "These are other people's personal stories. Chances are none of them will actually make me laugh so hard I will cry." And I was proved wrong. At least two of these brought actual tears to my eyes, and the rest of them were good for a solid chuckle or two. So enjoy, and get the tissues ready.

When Grace Spelman unleashed this question on the Twitterverse, I don't know if she expected the response she got.

please tell me about a time you laughed so hard you cried. (not from tv/movies/internet. It has to be an IRL situat… https://t.co/5FzoaZmjBx
— grace spelman (@grace spelman)1539183201.0

They are overwhelming! Something about the climate today makes people want to share their fondest memories. I wonder what it could be?

Anyway, Spelman herself started it off.

This is a hilarious text to get from anyone but from your grandma! Death is no laughing matter, but this text is pretty funny.

This is amazing. I'm just imagining this car driving on a particularly bumpy, rural back road.

@GraceSpelman A friend and I choreographed a dance to Taylor Swift’s “Red.” When we performed it in front of our sc… https://t.co/igjoWDlFhg
— Alison Byrnes (@Alison Byrnes)1539277273.0

It's especially funny to mess up the choreography if you were the one who choreographed it! This GIF will play on a loop in my head forever.

@GraceSpelman I remembered the time that I wanted to dress as “cotton candy” for Halloween and handmade my costume https://t.co/5t8PvYp7Df
— Aarin The Shark (@Aarin The Shark)1539218100.0

This is a straight-up nightmare and I cannot believe this person's parents let them leave the house like this. I will be forever haunted.

Dogs are some of the most entertaining creatures on the planet, and bathroom humor is hilarious. Combine the two, and you can't go wrong.

This is so funny. You definitely cannot openly make fun of an old woman in a dimly lit restaurant. This is something I would totally lose it over.

The name of the game

I love this so much. What did she even mean by this? I don't understand, but I also don't care because it's funny.

@GraceSpelman We were at karaoke in a sports bar and my friend performed the Star Spangled Banner, and multiple peo… https://t.co/15Xm4didb3
— Josh Veal tbh (@Josh Veal tbh)1539194565.0

First of all, who chooses to sing the national anthem at karaoke? Second of all, I want to see this happen.

This is one of those photos that should be in the "Hall of Fame of Awkward Photos," which I don't think actually exists.

This is like a scene out of a Buster Keaton silent film. I have a hard time believing it actually happened, due to how ridiculous it is, but that's what makes it so funny.

Attack of the dryer sheet

@GraceSpelman I was standing in line at Starbucks and the guy in front of me suddenly shrieked and started shaking… https://t.co/jRIGYj4CcT
— Jennifer Aldrich (@Jennifer Aldrich)1539377874.0

Oh gosh, we all know that feeling when we think there's a bug on us and we totally freak out. Only, it doesn't usually happen in the Starbucks line.

@GraceSpelman my family was playing pictionary and my aunt and sister--who are both very spacy and goofy—were on th… https://t.co/zfGthti9I1
— jugs bunny (@jugs bunny)1539282922.0

I'm sure we all have an insane moment like this we can point to. Often, family games (like Pictionary or charades) lead to hilarious moments.

People confidently shouting wrong answers is one of the best, most hilarious types of stories out there. It's always, without fail, SO GOOD.

This would have killed me. It sounds like a scene out of a movie. They were both wax figures, grandma!

@GraceSpelman Once, in the middle of the night, my gf was reading Fbook & noticed her mom was broadcasting a live f… https://t.co/b1WINCw8sV
— liz montegary (@liz montegary)1539311771.0

I'm so confused, did she know what she was doing? Or was it an accident?

Dog farts are always funny. Especially when your dog is usually "extremely ladylike." Those are always the most ridiculous dog farts.

@GraceSpelman My dad was bringing my mom a glass of red wine, suddenly he stopped and got that face where he clearl… https://t.co/mJNSjckVZD
— dee (@dee)1539379534.0

Oh my god, I can feel the tension and the hilarity of the moment! I wonder how it ended. Did he spill the wine?

I'm imagining them bouncing over the fifth pothole, cackling because she hit every single one of them. I bet it was funnier and funnier as they went along.

There's no recovering from a watermelon you've dropped on the ground, especially at the beach. I bet it was just infiltrated with sand.

Sometimes you don't see it! And it's so funny when that happens. For the record, the answer is Jimmy Kimmel.

There were several family game stories like this! I'm telling you, they are hilarious, especially when you understand the answer from a terrible clue.

@GraceSpelman A past roommate heard a real estate agent was on her way to show our apartment to a prospective tenan… https://t.co/3e18MuTJxQ
— Alexander Lewis (@Alexander Lewis)1539261220.0

This is a funny story. I hope he went along with it, and said something like, "How dare you interrupt me during my daily closet meditation!"

Sometimes you lose it over the slightest thing in times of great stress or sadness. I'm pretty sure my entire family was laughing during my grandpa's funeral. It happens.

@GraceSpelman The dog tried to lie down on a part of the blanket that couldn’t hold her weight (it was stretched ou… https://t.co/SWVbQyyuup
— Rebekah Gordon (@Rebekah Gordon)1539281079.0

Look at the terrified face of this dog as she slowly sinks to the ground! Her plan did not execute the way she hoped it would.

@GraceSpelman My friend & I were surrounded in a haunted corn maze. They all slowly pointed to a 7ft tall man holdi… https://t.co/WZCJXAxwHT
— Susie Schon (@Susie Schon)1539267409.0

This is it, folks. This is the one that got me. The first time I read this, I literally cried tears from laughing. Now, every time I read it, I lose it completely. Amazing.

Here is the second one that made me cry tears of joy. Maybe it was residual giggles from the first one. But look at how ridiculous this is. I love that he made himself laugh because of something he totally forgot about.

This is hilarious and also the reason why you shouldn't try to use scissors while hanging out on Google chat!

@GraceSpelman I entered a school talent show when I was 12. My performance was unchoreographed Tae Kwon Do (mainly… https://t.co/bnyZAjarub
— Melanie Sweeney (@Melanie Sweeney)1539291933.0

This is great. I hope there is video of this somewhere. Share this with someone who could use a laugh!