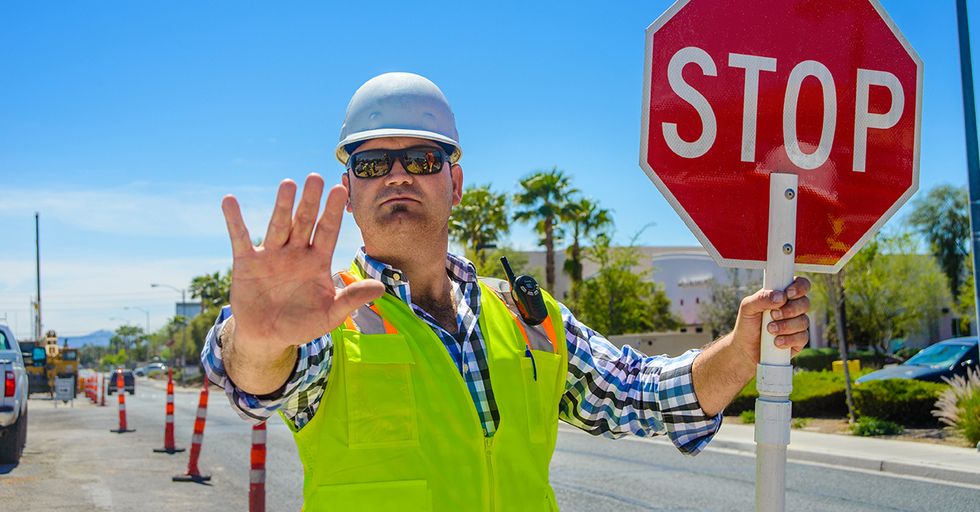 A recent Reddit thread started a great conversation between men where they got to air out their dirty laundry and talk about what really annoys each other, from man to man.

From bathroom etiquette to the everyday rhetoric that is almost entirely outdated and overrated, it was about time these men opened up and shared what was really annoying them. If it were up to these dudes, some of these things would just be common knowledge, but unfortunately, that is not the truth. You'd think some of this stuff was just basic decency, like washing your hands or giving some personal space in the bathroom. Apparently, not every man knows these things.

Let's just let it all out and try to get some of these men on the same page. It might seem a little bizarre to know that this is what truly annoys men, but at least now we know what goes on inside their heads.

It's no laughing matter.

This is a safe place, but get ready to take some notes because a few of these might be a shock to you.

It's time to come clean.

It's about to get really honest, really fast.

Leaving the washroom without washing their hands. It’s a minute out of your life you f***ing animal. -Nedward_Schneebly

This one sounds a little personal...

F***ing my significant other. -My_Steamed_Buns

Pissing all over the seats of public toilets and not clearing it up. -redneck_kungfu

Cracking open a cold one without me.
-der_bizmark

Making everything a competition.

Not having personal space.

Pissing beside you in a bathroom with 4 other open urinals. -DropTopEWop

When you're a little too chatty.

TRYING TO TALK TO ME WHILE I'M PISSING.

Pretending to not have emotions.

Stop giving a sh*t what other people think that makes you more or less of a man. It's okay to show emotion, my dudes. -Zelkova64

Being so hung up on trivial factors to validate their manhood/masculinity.

I'm only 4'0" and weigh less than 80lbs as a grown man. So many men I encounter assume that this causes me constant insecurity and grief. I could not give less of a shit in all honesty, and I feel sorry for guys whose self-worth is tied to things they cannot control, due to societal expectations.

Again, leave height out of the conversation.

I'm 6'4 ...I don't enjoy going to bars where there's going to be dickheads trying to start something... it happens every single night so I just stopped going to a lot of places a lot of times... that behavior is disturbing to me, just let me chill in peace. -prostateExamination

Shaming other guys for being a virgin. I'm not a virgin but there's more than one guy I know who constantly shame me for being one because I don't brag about my sex life. I can't imagine how hard it is for the poor guys who genuinely are still virgins. -Claris-chang

Yeah, let's put an indefinite end to this one.

Getting angry at women who turn them down/sending abusive messages if they do get turned down. -Semajal

Even guys think this is ridiculous.

Catcalling. Incessantly talking to women who are ignoring you. Touching women or pulling out their headphones to get their attention. -respected_prophet

Say it louder for the boys in the back.

I didn't know men hated this too!

It'd be nice if they stopped street drag racing in their stupid cars and killing innocent people, that's for sure. -canarypalm

Being afraid of gay men.

Stop being so homophobic. I can safely say that 99.9% of gay guys do NOT want to have sex with you they know you're straight and that puts you off limits. Out of the ones that do hit on you, just say, "Sorry I"m straight", and they'll walk away and you can take it as a compliment that you got hit on. -That_Opposite

Being a thirst trap.

Thirsting over women. What does commenting on every single revealing selfie ever going to achieve? -I_hate_traveling

Taking down other men.

Attempting to emasculate other men. Masculinity should not hinge on any activity, and attempting to make men feel like lesser men for their unwillingness to submit to peer pressure is foolish in all regards. -InsaneDane

No one likes a try-hard.

Holding me responsible for other men's actions. -Vandechoz

Is the bro code still a thing?

Fueling this stupid idea of "the bro code" (Females are equally guilty of this too, with their equivalent code, might I add) You shouldn't need a rule to tell you not to hit on your mates' crush, it's called being a decent f***ing person. -Rawbuns97

Just a change in overall language.

Spitting. Seriously, this is a little out of hand.

It's time to think of more creative words.

Maybe rethink some of your shoe options.

Just have some respect!

Blaming their own insecurities on others' misfortunes and related actions. Not respecting people for who they are and what they're going through. -elephantalmustard

Men, you heard it here first.

Time to put the bro code to bed, gentlemen. Share this with your guy friends to see if they have the same thoughts!