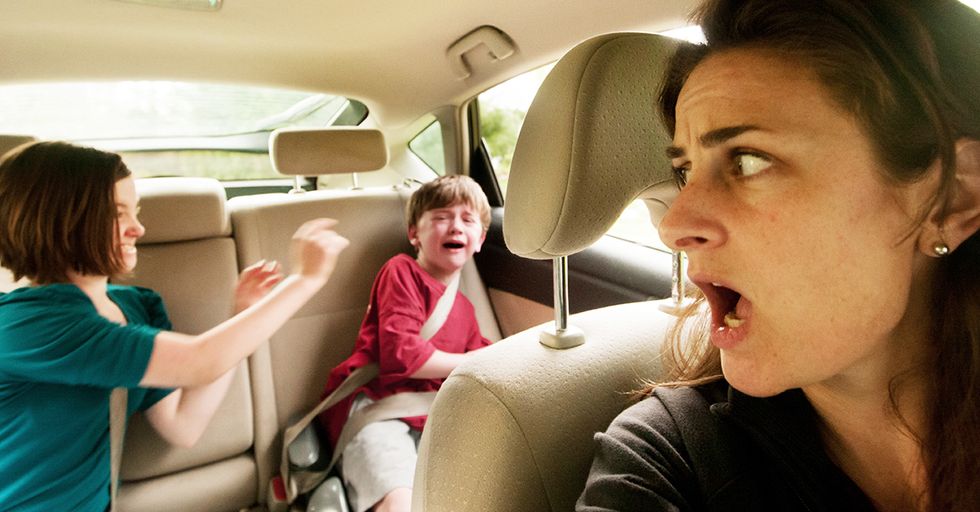 We all know kids say the darnedest things, but what about parents? Taking care of the kids can lead to some crazy (and hilarious) antics, as most parents know.

So, we asked parents about the weirdest things they’ve ever said to their kids—and they didn’t disappoint!

Check out what these parents have found themselves saying. You’ll laugh out loud just as surely as they did!

Watch what you lick!

"Just because the dog licked you does not mean you should lick her." -Rebecca Allen

Basically, toilet training is an important step for kids.

The ins and outs of pregnancy v.s. gardening:

My son asked me the other day if the dad has to fertilize the egg every 3 months during pregnancy like you do with a plant. I'm really just curious about who is teaching my son about gardening because it certainly didn't come from this house. -Karen Smith

Restaurant etiquette is a work in progress.

“For the love...stop licking the butter and stop hitting your brother with your pancake!" —me; this morning at a restaurant. -Bridgette Bush

What else should we do with almonds?

Take that almond out of your belly button. Don't use Pokemon balls as boobs. Remember, you can't make chicken noises in the restaurant. -Michelle Noelle Next up, one parent's words were overheard exactly at the wrong time, plus the one time cake was better than fruit!

Careful what you say while phone calls are in progress!

My boyfriend was sending a voice message to a friend of his and just before he released his finger to send the message I shouted, "Get your finger out of your butt!" to one of my sons. His friends' laughter confirmed my fears. He heard everything. -Crystal Bigras

Mischief is never bound by age.

“If you do not stop making chicken noises, you will be grounded".... to my 11 and 17-year-old boys recently. -Salina Daste

Settling disputes can get weird.

“YOU DON’T EVEN HAVE BALLS!"  Said after daughter yelled that her brother kicked her in the balls. -Adrian McCandless

And sometimes it’s your friends who say the darnedest things.

My favorite this week was overheard at a friend's house: Stop digging holes in the yard and putting your face in them! -Leah Hodges

The lesser of two evils: cake or watermelon?

“Put down that watermelon and eat some cake!" When he was little, he would turn red when eating watermelon, strawberries, and tomatoes. Not from the juices, but a weird blotchy reaction if he ate a lot. He'd started reacting to a watermelon at a party, and I had to make him put it down and eat something else before it got worse. -Brandy Lee On the next page, one of the strangest 'twin' things you'll ever hear about!

Just one of those twin things…

"Don't lick each other's eyeballs!!! You'll get an infection!!" I have 7-year-old twins. Things get really weird really fast around here. -Elena Pita

Both of the following are pretty valid queries:

Please stop eating my shoes (to the 4-year-old), Why are all the fridge magnets in your pillowcase (to the 2-year-old)?  That's today's record so far. -Racheli Glasser

The difference between want and need.

Tonight while cashing out at Barnes and Noble my 4-year-old grabbed an item and told me he NEEDS it. I looked down and had to tell him I'm sorry, but you don't NEED a Pope Francis bobblehead. -Meghan Price

“Stop screwing people!"  While then 3 year old runs around the house with a play screwdriver yelling “I’m gonna screw you!!" -Brookelyn Elizabeth

This is an unconventional and not-so-imaginary friend:

No, you can not sleep with the watermelon even if you named him Billy. -Jennifer Cain Keep reading for parents' reactions to their kids' shenanigans, from school to the backseat of the car!

Ah, the beauty of irony. And quesadillas.

The weirdest was “Take your elbows off your quesadilla." But my personal fave is “STOP SHOUTING!" delivered at full volume trying to be heard over *their* shouting. -Katie Banks

Of all the strange places to make orange juice

A few that stick out: "Stop licking your brother's shoe." "Don't rub your cookie on the floor." "You can't make orange juice in the backseat. Especially without any oranges." -Ami Leigh

Talk about a lesson in biology.

No, you do not need to duct tape your butt. I understand that duct tape fixes everything, but that crack is supposed to be there. -Micky Kahn

And don’t get us started on what kids get up to at school!

“Quit doing pranks at school! Your teacher said you were lying on the bathroom floor with a paper knife taped to your forehead." -Channing Dawes Next up, universally important life lessons and one major drawback to getting your kid into superheroes!

Not the best threat to make in front of your neighbors:

When my son was three, I bought him a set of wiffle balls at the store. He threw a huge tantrum on the way home for some unrelated thing. We arrived at the house, got out of the car, and in front of a large group of neighbors I shouted at my son, "DO YOU WANNA KEEP YOUR BALLS?!?!" -Michelle Young

One life lesson everyone should learn at a young age:

“We don’t ride the pony naked!"  My youngest had a rocking horse and would run away without her diaper and try to ride it. -Jennifer Geake

"Stop wrapping your penises around that fork!" And "DUDE! You can't crap in a bucket in the yard; we have NEIGHBORS! I don't care if Grandpa lets you do it! Someone should spank Grandpa!" are two of the more notable ones that come to mind. -Stephanie Marshall

The downsides of getting inspiration from superheroes.

“No, you can’t throw the dog to see if she can fly like Superman!" Also had to argue with him that he couldn’t jump out of a two-story window to see if he could just because he had a “cape" on. -Angelique Rosbury

“My butt is not your personal bongos! Stop that!" I said in the middle of Walmart after I quit caring what came out of my mouth. -Sheryl Swift Finally, check out parents' reactions to one hilariously incorrect definition, and some childish interactions with animals!

You can’t always trust your kids’ definition of something.

“Stop corn-dogging your brother!" (My oldest was kneeing his brother in the behind - he told me that was ‘corn-dogging.’") -Michelle Sullivan

Some kids will do anything to get out of school for the day.

“I don't care if you ARE dead, you still have to go to school." Some context might be useful.  They were studying the Ancient Egyptians at school, and he was lying on the floor being a mummy and telling me he was dead and wrapped in bandages. -Shain Wells

The trouble with woodchucks:

It's NOT dead just unconscious. Quit crying and help me get this woodchuck (who is now waking up) out of the living room! -Sylvia Sullivan

Kids and dogs might have a couple odd things in common.

"Stop barking and eat your dinner" or "Stop licking your sister's shoe." I used both multiple times with my middle when he was a lil feller. -Jenn Draper Like this story? Be sure to share it with other parents and find out what crazy things they've said to their kids!