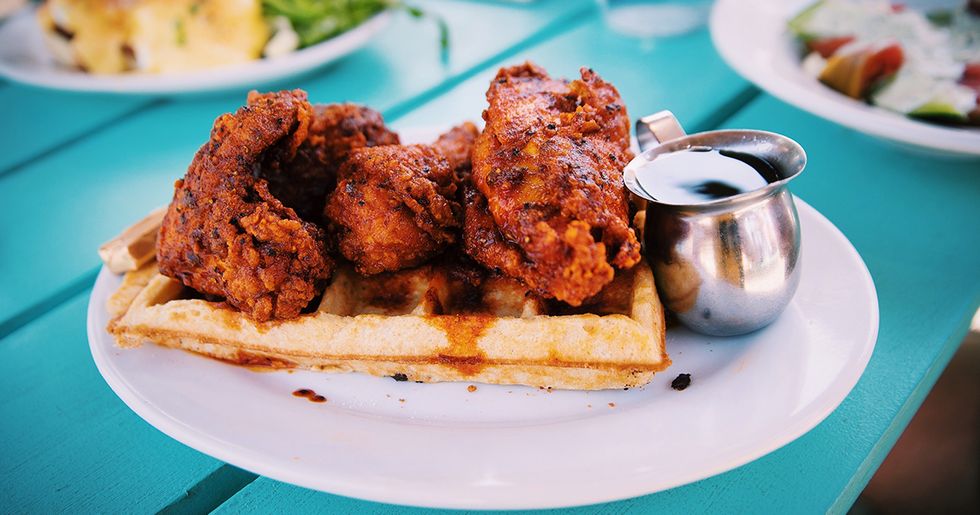 The world has some questions for you.

Specifically, some questions about food.

Like, why do Americans make foods in the shape of their flag? Bet ya never thought about that one, huh? You have to admit that here in the ol' U S of A, we do things a little differently. Here are some questions Twitter users from around the world have about the ways Americans enjoy food.

Starting with this one:

"Tuna sandwich." Yeah, I suppose that technically makes sense, but it just feels so much better with the word "fish" in there!

Do you really have to ask? You don't have to wash paper plates!

This is a fair point.

Maybe it's supposed to be, like, "entering" into the main portion of your meal? Yeah. Let's just go with that.

This one shocked me to my core.

Has anyone actually ever made a grilled cheese on a grill? I'm feeling a desperate need to try one. This next question might only make sense in specific regions of America.

My favorite kind of pie.

Pies are round and get cut into slices. Pizzas? Same thing. I have to assume that has something to do with it, right?

Wait, how are we *supposed* to say "Nutella"?

I guess I'm going to have to start calling nuts "noots" now. That's the only reasonable solution, right?

This one I can answer. Kind of. In the U.K., "jelly" refers to a gelatin dish that we call "JELL-O." In America, jelly is fruit spread made from fruit juice, while jam is a fruit spread made with fruit juice and the entire fruit that's been chopped up. And don't even get me started on preserves.

Who thinks this is weird? I am a huge fan of putting both potato chips and French fries (which I'm assuming this tweet refers to) on pretty much any sandwich. I implore you to try it.

Yeah, we're guilty of this one.

I'm gonna side with the rest of the world on this issue. Are we done with bacon yet? It's good, but is it really that good? On this next issue, I am staunchly in support of America.

Look, you don't have to eat cheese. I can respect that. But I'm also gonna go ahead and tell you that there are very few dishes which cheese does not improve.

'Cause it does your body good?

Real talk: Because we're suckers for advertising. Also, we want our bones to have bones.

You should try this immediately.

This tweet was clearly written by someone who has never had the distinct pleasure of eating this most magical of food combos. They should probably fix that ASAP.

Do we do this?

I've never done this; I don't think. That being said, I'm not opposed to the idea. Cereal is delicious!

Legend has it that if you drink alcohol from anything other than a red Solo cup, you will cease to be a True American ™. As someone who grew up in the Midwest, this next question hits a little too close to home.

OK, look. Sometimes you just want to dip your pizza in Ranch dressing, OK? It's not that weird. OK, it's a little weird.

What are you talking about? We don't do this. We only have completely nutritionally balanced breakfast foods like sweetened cereal and donuts.

We even get tea wrong.

If you don't leave your tea bag in, how is anyone supposed to know how classy you are?! (Just kidding. Take your tea bag out; ya dang monsters.)

This one bugs me too.

I'll admit that I've enjoyed a beverage or two out of a Mason or jelly jar. But it was really a TREND a couple of years ago — mostly thanks to Pinterest.

To let it know that we're proud of it for being beer. Right? Share this with a fellow American...or a friend from another country!