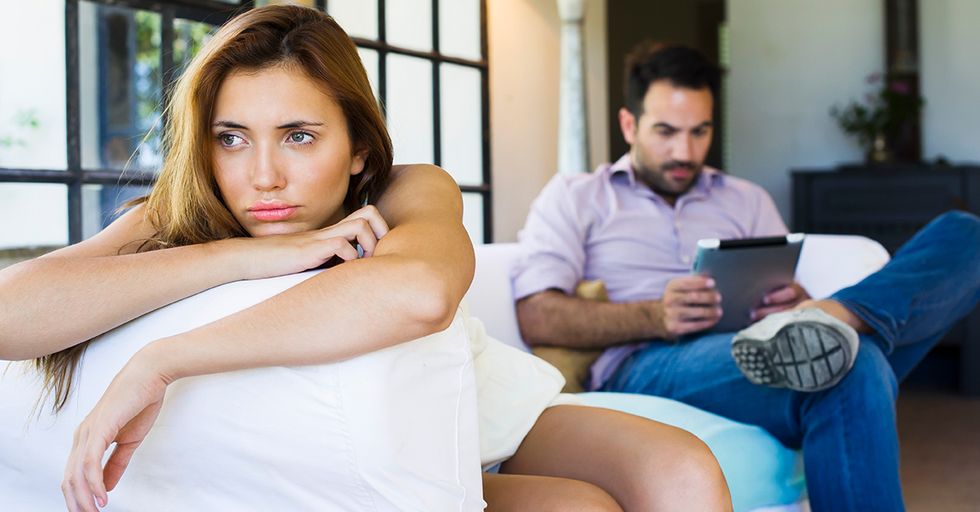 Being married is one of the best things ever.

After you've spent enough time with someone, their delightful quirks that you found so endearing when you first started dating start to become, well, kind of annoying if you're being totally honest.

It doesn't mean you don't love them. It just means that there are some things you could do without.

That's no reason to start freaking out!

A recent AskReddit thread asked people to share their own experience with "cute" quirks about their partner that eventually became gigantic annoyances after they got married. Have your own to share? Add 'em in the comments!

You do the talking.

My husband hates social interaction (even relaying information to and from friends sometimes) and will avoid it at all cost. At first, it was cute, he would beg me to make the calls to order food or find out information. Now I find it very inconvenient - especially when I'm not in the mood to talk to people either. –slothin_around

The sarcasm. It would be nice to bring up a topic and not get a zinger in response. "What do you want from the grocery store?" "Five pounds of filet mignon, some motor oil, and, oh, a million dollars." No, duckface, its 100 degrees out and the kids need food. I'd much rather sit next to you on the couch. WHAT DO YOU F**KING WANT! –MissPlaceDApostrophe

Yep. That would get annoying.

She talks c o n s t a n t l y. I'm a guy who can appreciate a good silence but she hates it. She has to fill every silence by talking or humming or singing or playing music or putting on a TV show. Most of the time she isn't talking to me, really. Example; as I type this she is playing Fallout and just kinda narrating her experience. It's still pretty cute and charming at times, tbh, but when we first started dating I found it far more adorable. –IrishIncarnate

Her anti-confrontational attitude. It was a breath of fresh air to be with someone who had a pretty laid back attitude about things and didn't seek to make a fight out of the smallest things. 11 years later, still can't get her to properly communicate her own desires and/or gripes during an argument, or confront a family member about something out of line they've done. –Relleck_ENI This next one is a little too real.

My husband’s laidback attitude. I truly appreciate that he doesn’t stress about much; he definitely adds balance to my (pre)crastination. At times though I wish he was more timely. We’re going on a road trip? Maybe we should book a hotel in advance, not 20 minutes before getting there. We moved across the country and I set up the Relocube, pick up, and, drop off. I asked him to research potential apartments. The week we were to have our Relocube delivered we still didn’t have an apartment or even one in mind. Our Relocube was set to be delivered on Saturday, we signed our lease on Friday. I’ve learned to take the lead on planning, but it would be a nice “break" for me mentally if I didn’t also have to do it. –jenmoe

My husband always tries to make me laugh. I honestly hope he never stops trying, but there are times when it's like "really?? You're trying to make me laugh NOW?!" –chlnaturester

His forgetfulness used to be cute and fun. Waking up to fresh gallons of milk sitting on the counter for hours is annoying as f**k now. –Blackat

Everyone loves a know-it-all!

Dating: Wow he knows a lot! I love that he always seems to have the answer. We won't have many problems to worry about when we combine our knowledge! Now: Omfg babe it won't kill you to be wrong. Not everything has to be an argument just because your answer has been challenged! –MarieOMaryln

She calls it tickling. I call it crabpeople auditions. –LawnShipper This next one might give you a headache.

Her having to sing everything like it’s a perfected choral piece. –jonnyboy98

Her hair. She has such long, beautiful hair but it gets everywhere. Drains. Sinks. Carpets. I've had to sit and cut hairs out of the vacuum so it would work again because it had tied up the rolly bit. Not to mention I've had her hair on me and all through my clothing. –Captain23222

At least they don't hate her!

Everyone likes her. She's a very likable person, but my friends and family like her more than me. Just gets to me sometimes when she tells me something about a friend or family member that I should have heard from them. –pixel_zealot

Clumsily break things accidentally. It'd be a teaspoon one day or a shoelace the next. Little insignificant, how-on-earth-did-you-manage-to-break-that? type of things. Started out quite cute and amusing. Now it's a case of "Babe, that's like the fourth vacuum cleaner this year, and it's a f**king Dyson." –TheGrog1603

Get to the point.

He cannot tell a story. Rambling, unnecessary details and the listener is three steps ahead the entire time, just waiting for it to slowly unspool. –cinnapear This next thing would seriously drive me crazy.

Talk in a baby voice. Sh*t was cute at the beginning, but when you're asking me if you can have my last beer in the fridge in a tiny baby voice, f**k no, now I need it. –sixesand7s

Takes forever to eat a meal. It was very well-suited to long dates, romantic dinners, those intense getting-to-know-you conversations at the beginning. 15 years later and I just want to have a meal where I'm not done before he's barely taken a bite! His whole family is like this and I simply don't understand. It's food, you put it on a plate and you eat it and go on with life! Not for them, mealtimes often stretch on for hours, occasionally into the next bloody meal if it's a family event. I just don't get it. –CreampuffOfLove

Make up your mind!

Her indecisiveness. It was adorable to see her struggle when we were dating but goddammit I'm just trying to figure out what to make for dinner. –rawbface

Falls asleep INSTANTLY. He works long hours (Japanese. In Japan) and is always tired, which I get. But he falls asleep literally while eating or in the middle of a sentence. Was really cute. And I still can’t actually be mad at him because I know it’s because he’s working so hard. But when we only get late evenings to talk over a quick dinner and I’m constantly having to wake him up every 5 minutes... gets less and less cute. –Whitehexe

Her bossiness. She came from a really hard upbringing and I was floored by how she was taking charge and refusing to fall into the same trap as her family. Actually, I still am floored. Even when I'm annoyed at being bossed around I'm proud. From trailer park to prosecutor. She's amazing. –SerielAwooer

At least he keeps you on your toes!

His spontaneity. It used to be really fun and sexy...but now it's like living with a real-life Homer Simpson/Phil Dunphy hybrid. No joke, I am just waiting for the day he comes home with a bag of "magic beans." –totallyoriginalname2

His tidiness. I never met a guy who was so organized and capable in the household (fixes everything, has a wide range of nicely organized tools, knows how to use a washing machine, to sew buttons...). Now we live together and I realized it's more of a minor OCD behavior since he is not cleaning let's say "efficiently." It's more that he uses this exercise to relieve stress (e.g., he comes home and the first thing he does is clean and put away stuff, and most important: vacuum. No matter how hard I cleaned before him). –Ian1co

Not a good way to level up your relationship.

Video games. Used to be kind of fun laying around eating takeout and watching but with kids now sometimes I wish we didn't have the games to distract SO. –Glassshardsandeggs

Ever heard of Google?

Helplessness. It used to be cute to help her figure out things and now even simple things that could be easily Googled she has to ask me. I mean simple questions like something referencing pop culter or maybe looking a for a recipe for chili in a crockpot or what actor played X role. –derrabe80

So much for "easy open."

Opening something the wrong way/forcing something open. If a bag of cookies has a resealable opening, he will tear it open from the other side. If a strap has an easy-pull opening mechanism, he'll just cut it off. Nothing is safe. –just_go_with_it I think many people will relate to this next one.

Let me fix it.

Always trying to fix everything. When we got together 10yrs ago, I found it endearing. My hero wants to save me and fix all my problems. I was 18 when we met, and a mess, so in a lot of ways I did need some saving. But, now I'm a functioning adult nearing 30. I just want someone to vent to most of the time. I don't need to hear about how I should handle issues at work, etc. Just hear me out give me a good "wow babe, that sucks," split a bottle of wine and watch some Netflix with me. Not everything needs to be fixed. –interrobangin_

If that's the worst thing, you're pretty lucky.

She sneezes too loud! (I think on purpose). –Donnakebabmeat

Pet names. They used to be cute but now every time one comes out of her mouth is just sounds so condescending. –xLykos

My wife has always been the outdoorsy type, which I loved because I enjoy a hike now and then. Then we moved to Montana... Now, we have mountain bikes, kayaks, expensive hiking gear, and I can’t seem to just spend a Saturday sitting on my ass anymore. It’s exhausting. –I_Like_Eggs123

I have a very bad feeling about this.

I've been married for 17 years. My husband is a wonderful man. He does this thing when he yawns he sounds like Chewbacca. It is getting worse with age. It's awful. It was funny at first but now I want to DDT him. –Strangeryoumayknow Share this with your spouse (if you dare)!