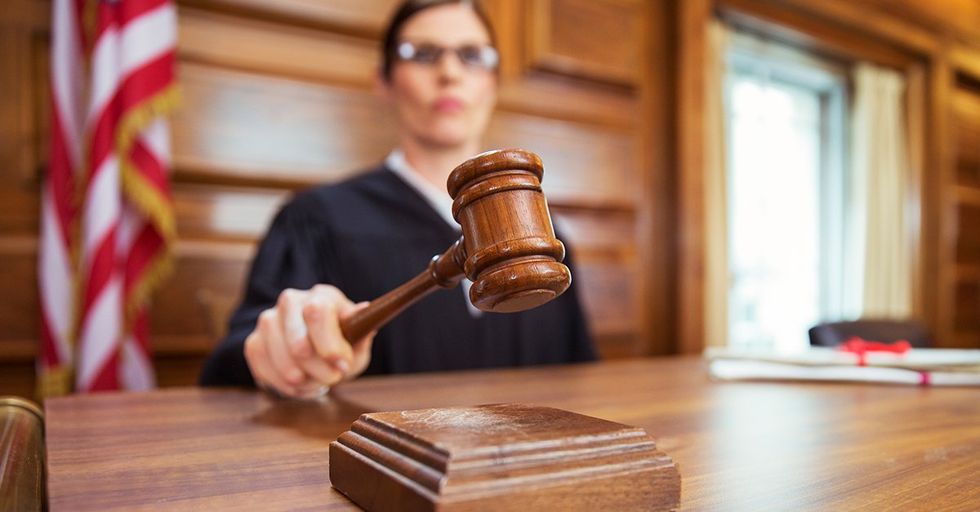 These 35 Things Should Definitely Be Illegal, But Aren't

Life is full of many little annoyances. But unfortunately, you can't put your co-worker in jail for chewing their gum too loudly. Or your neighbor who never, ever cuts their grass. Or even your husband who can't load the dishwasher correctly. Maybe he needs to spend just a little bit of time in the slammer until he understands why cups on the top shelf...ok, maybe this is getting out of hand.

These people gave their answers and most of them are super relatable. From driving etiquette to fashion choices to more serious problems like the mistreatment of animals, people had a lot of opinions.

This is something you might not think about during a celebration, but really shouldn't be allowed.

"Balloon releases. All you're doing is littering. It's not like those balloons go up into space and then disappear. They eventually pop, float back down to earth, and usually end up in oceans or rivers." -Pots_And_Pans Why is it not considered littering if it's floating up in the air instead of being thrown on the ground? According to the US Fish and Wildlife Service, "Birds, turtles, and other animals commonly mistake balloons for food, which can harm or even kill them." So hold onto your balloons and consider a nice air horn celebration instead.

There's nothing more annoying than driving your car when suddenly, you hear the sound of a siren...but wait? Was that the radio?

"Anything being broadcast on a radio that could easily be mistaken for a legitimate traffic sound." -icxcnika The absolute worst when you nearly pull over and then realize the siren was because "THESE PRICES ARE SO LOW THEY SHOULD BE ILLEGAL!"

"Exact Change toll booths with no change machines" -CrunchyKorm This one is really annoying. Even if you remember to bring cash for tolls, you might end up spending $20 on a $5 toll just because you forgot to break a twenty.

No. more. cookie. sheets. with. sticker. residue. on. them.

"Also if they are on book covers they must not tear the surface of the cover when removed." -OktoberSunset We are tired of accidentally tearing half the main character's face off our book covers.

Please stop doing this on the subway when there is no way to leave the situation.

"Playing games on your phone in public with the volume up and no earbuds or headphones." -Spoidaz Nobody wants to hear your pigs squealing or your jewels popping or whatever is going on over there.

Why do employers do this?

"After someone uploads a resume online for a job they can't have a questionnaire that asks the same things that would be in a resume." -brad2dbone Why do you need to know twice about the pizza restaurant I worked at in college?

Junk mail should just be illegal in general but especially this kind.

Do we really need to know every time Selena Gomez gets frozen yogurt?

"Paparazzi harassing celebrities. I understand that when a person is famous, extra attention comes with the territory. But the way these people stalk and harass celebrities is just plain wrong." -schniggens

"Putting fliers on car windshields. It's unwanted, and if I want to get rid of it, I have to physically take it to a trash can otherwise, it's considered littering if I just toss it on the ground or let it fly out of my windshield." -LAE123

We can all agree on this.

"One-ply toilet paper. It's a public health issue. Should be outlawed by the FDA in real life either way" -VeseliM It's just not thick enough. You need more plies than one, and that is a FACT!

Just move over! Why are you doing this?

This is legit terrifying every time it happens.

"COMMERCIALS THAT ARE TEN TIMES LOUDER THAN THE SHOW you were just watching" -Boing_Boing Actually, this was made illegal in 2012 in the US, but some advertisers still get away with it by adjusting the sound on their ads in other ways so they seem louder.

When was the last time you used a phone book?

"Making thousands of phone books, like there is a huge demand, and leaving them in businesses, campuses and apartment buildings. They just pile up, no one takes any and then they get thrown out. Huge waste of resources for a completely outdated medium." -Trollwake Get rid of phone books, please! The internet exists and they mostly just rot on your neighbor's porch.

Every college student will agree with this one.

"Overcharging books in universities." -jambolino23 Regular book: $15 Textbook: One billion dollars and you better not write in it, get a coffee on it, or fold down a page because then you won't be able to sell it back for 5% of the price you paid for it.

This does make sense.

"It should be illegal to donate money to political campaigns. I don't understand how we make bribery entirely legal in this country. Political campaigns should be publicly funded instead of going to the highest bidder." -adrewishprince

Ok, some of these are just petty.

"I maintain that borrowing a lighter and then keeping it should be a capital offense." -[deleted]

This is very, very annoying.

"Leaving your shopping cart in the middle of the parking lot." -lisasimpsonfan How lazy are people? Just roll it to the cart stall! It's not far!

Pets are family, too!

"Leaving your pets outdoors during bad weather" -Anodracs Chances are if you wouldn't want to be outside in it, neither does your dog.

You can teach an old dog new tricks if you try hard enough.

"Having a badly behaved dog. Make it that people are only allowed a dog if they put in the time and effort to train it properly." -sandyposs Though, some dogs are just bad bois for lyfe.

What monster would do this?!?!

"Not deboarding a plane in order by rows. Pisses me off when people in the back bull rush the aisle while people are trying to get up out of their seats."-fartsticker But while we are on the subject, wouldn't it be easier if planes boarded by row number instead of how they do it now which seems to be...however they feel like it?

Don't pretend like you can't count to 10 all the sudden.

"Bringing too many items into the express line." -beaucoup_de_fromage

Just use the button, don't be a try to be a professional microwave chef.

This should be considered fraud.

"Letting someone go ahead of you at a four-way stop when you have the right of way. I don’t care if you’re trying to be nice. You’re going to cause an accident." -Calvin_Hobbes124 You're still breaking traffic laws even if you're doing it to be polite.

Some of us have places to go.

"People stopping for a chat in crowded areas or narrow places." -Dinaatio

When you just want to make mac and cheese but have to read about the most delightful little cheese shop in Paris for 15 minutes.

Oh, this one will make your blood boil.

"Cutting in line" -WhiskaMittie And if you call the person out they always say something like, "Oh, sorry. I didn't know this was the line," like people were just standing behind each other not moving for fun.

"Asking me questions while I'm using the urinal. I work in IT, co-workers see the bathroom as my office." -Sad_And_Obese

People should be required to try.

"Not reading an email in its entirety. The answer to your question is in the 2nd line of my email. I'm surprised my eyes haven't got stuck in the back of my head from rolling them constantly." -_selcouth_

"Clipping your fingernails in a common cubicle" -[deleted] Clipping fingernails anywhere but the privacy of your own home should be illegal.

"When people stop at the top of an escalator to figure out where they want to go next." -CaptainCacheTV

Say it louder for the people in the back.

"It should be illegal for companies to not respond to candidates. After I've applied, written a well thought out cover letter and sent my resume, been contacted by the company, answered questions via email, provided references, had a phone interview, an hour long in-person interview and tour of the facility, sent a thank you message, and a follow up a week later, YOUR COMPANY OWES ME A DAMN ANSWER. Ghosting on applicants should be illegal. " -redhandfilms