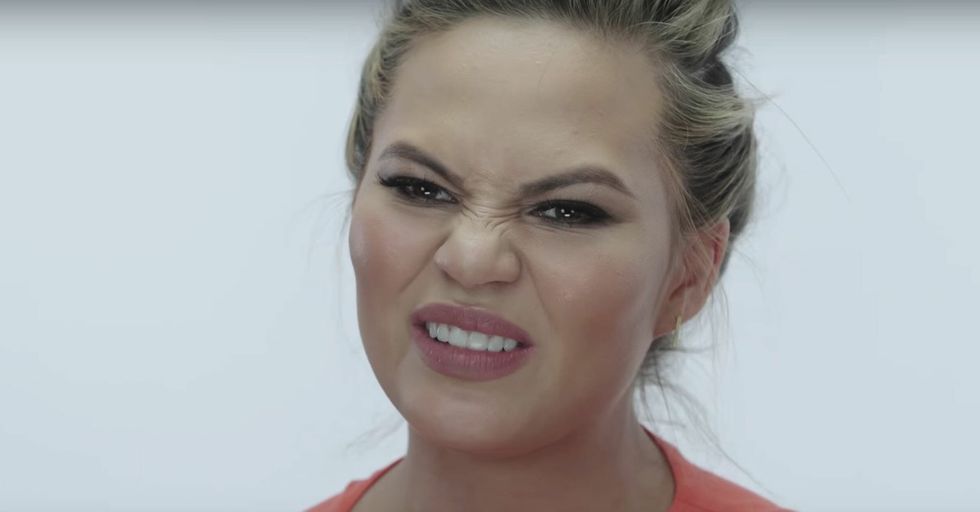 We all like to imagine that we're smarter than the average bear. And, to be fair, 50 percent of people are! (That's how the math works out.)

But, no matter how smart you are, there may be some words that you're pronouncing incorrectly.

Now, to be fair, a lot of the informal rules about pronunciation are problematic for various reasons. For instance, a lot of people get all up in arms when someone says, "aks" instead of "ask." But did you know that the "aks" pronunciation actually predates "ask"? So if you're of the "older is better and everything must be super proper" school of thought, you should actually be saying "aks" rather than judging people who do.

Even the most brilliant people among us are probably pronouncing some words incorrectly. With the number of words in the English language, it was pretty much bound to happen, ya know?

So, here's a list of some of the most commonly mispronounced words. Starting with...

Although, even she corrects people when they say "TIE-gen" now.

Even Chrissy doesn't completely understand why, from the looks of it. Perhaps for the sake of maintaining consistency?

But look: Even her mom weighed in on the matter.

Chipotle also piped up and said people have been pronouncing their name wrong for decades.

In my experiences, parents usually say "chi-poll-tay." But that's not right.

Thanks, Becky! I'm guessing you helped a lot of people today. Now, let's take a moment to go over other words that you may be mispronouncing.

Look at that word. Do you see an X in that word? No, because there isn't one. So stop saying "EXpresso."

This one is sort of a bone of contention on the Internet. The term is actually an acronym that stands for "Graphics Interchange Format." Since the word "graphics" has a hard G sound, a lot of people (myself included) pronounce the word "GIF" with a hard G. But the creator of GIFs himself, Steve Wilhite, insists that the word is actually pronounced with a soft G.

You're technically not supposed to throw an extra syllable in there and say "mis-CHEE-vee-ous." It's just "MIS-chi-vous."

Do you pronounce the T in "often?" You're not supposed to! Say "offen" instead.

This is another one I've been saying incorrectly for my whole life. It's "PREL-yood." Not "PRAY-lood."

"The Children's author was given the middle name "Suess" after his mother's maiden name. It was originally pronounced "Zoice" which rhymes with "voice." However, he accepted the anglicized pronunciation of "Soose," so you're not breaking any rules or anything if you say it that way.

A lot of people say, "Daylight Savings Time" adding an S to make "Saving" plural. But, the correct phrase is with "Saving," as a singular word.

This one might be more of a regional thing, but some people say "bob wire" rather than "barbed wire." "Barbed wire" is correct; it refers to the sharp points — or barbs — on the wire itself.

There's a difference between a "cavalry" — soldiers who fight on horseback, and "Calvary" — the place where, according to Christian tradition, Jesus was crucified. Now you know!

It's not "doggy dog world." Although, that world actually sounds delightful.

Some people say "ex" instead of "et." Interestingly enough, the classic Latin pronunciation would have actually been with a hard C in "cetera" — "et KET-ur-uh."

For all intents and purposes

It can be tempting to add an extra H in there and say "heighth," much like we do with "width." But don't!

You probably know this one already, but just in case: "Irregardless" does not mean anything. You're looking for the phrase, "regardless."

A common mispronunciation for this word is "joo-luh-ree" as opposed to "joo-ull-ree." If it trips you up, just try thinking of the word "jewel" to help you out!

The word "larynx" is often plagued by a transposition in letters known to linguists as metathesis. This means people say "lair-nyx" even though the Y comes before the N. "Lair-enx" is the correct pronunciation.

As in, "safe to drink." Even though you might carry drinkable water in a pot, "potable" is pronounced "Poe-tuh-bull."

It can be tempting to add an extra A in there and say "Real-uh-tur," but the correct pronunciation is "Real-turr." Also, did you know "Realtor" is a trademarked term?

There's a difference between the two! "Silicone" (sill-ih-kone) is the substance that's used for breast implants. On the other hand, "Silicon" (sill-ih-kin") is a chemical element.

If you pronounce this word with a B anywhere in it, you're doing it wrong. Sorry to have to be the one to tell you.

It's pretty common for people to say they "take things for granite" instead of taking them "for granted." Unless you're talking about a piece of rock that you assumed was granite, you mean you "take it for granted."

Yup, even the word "pronunciation" can throw people for a loop. They might say "pro-noun-see-ay-shun," but it the correct way to say it is, "pro-nun-see-ay-shun." Share this with your favorite word nerd!
20%

$10.99 $8.79
Buy Now
See More Deals
We hope you find these deals as awesome as we do! Just an FYI: we may receive a share of sales from links on this page