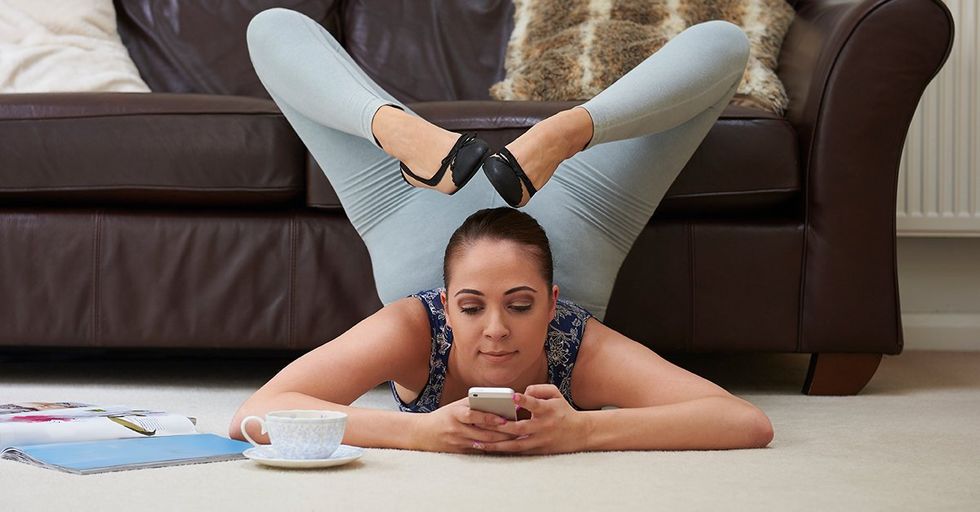 Picture this: you're in elementary school, waiting in the wings of your auditorium behind one of the fuzzy blue curtains. Your whole school is sitting criss-cross applesauce on the floor, staring at the stage. Your gym/theater teacher comes on the mic and says "Our next act in the talent show will be INSERT YOUR NAME HERE." It's your moment! You're about to perform your incredible talent for the entire school!

What is your talent? Well, of course, it's something you're incredibly good at. Something that will blow all their tiny minds so hard they'll forget their mom packed a pizza Lunchables in their lunchbox when they specifically asked for nacho Lunchables.

But wait, you're about to step onto the stage to perform your incredible talent when you realize. Am I too good at Colombian pan flute playing/rhythmic gymnastics/a dramatic hand puppet reenactment of the movie The Godfather? What if the audience doesn't appreciate the nuance of my talent? What if they hate it?

But of course, that would never happen, right? Every talent is appreciated! If you are good at something it follows that everyone will see the value in you being good at a thing. Except, maybe that's not always so true. Like second graders not completely grasping the subtleties of The Godfather when reenacted with homemade hand puppets (even though your Don Corleone accent is extremely good and not at all hacky), sometimes just being good at something doesn't mean people will be into it.

These are some things people think it's fine to be good at, but once you get too good at them, people get weirded out.

People don't want to think you're stalking them, it turns out.

Remembering people's personal info. Like you remember everything they've ever told you about themselves. Cool at first, then borderline creepy!! -ServerSettings

People don't want you to know too much about them.

Knowing phone numbers and addresses: Great! Birthdays and anniversaries too? Cool. Where all their surgical scars are and when and where they got them? Creepy. -FunToStayAtTheDMCA

We all know this person.

It gets uncomfortable when someone does it too much.

That’s also something that’s less funny the older you get, or at least in my experience. I used to make people laugh a lot with self deprecating humor in high school and my early twenties, but now that I’m in my 30s people just look at me sadly. -SavorySausages

It sounds cool when you hear someone is good at picking locks, right?

One time in college we had a lock picking seminar. There were two people who were extremely good and picked even the most challenging locks we had effortlessly.

One of them was a 30 something-year-old who went through special military training for escaping capture.

The other was an 18-year-old freshman. We asked him where he learned all this, he just said "eh, I picked it up in middle school" and wouldn't say any more on the subject. -nagol93

As someone who can juggle, I can confirm this is true.

I can juggle 3 balls and usually, people are like "Woah that's awesome, can you show me?" or kids love it so I get some extra credit there. But I never wanna become the juggler guy. -WhirlingDervishGrady

The best way to demonstrate your juggling skills is casually at a party when people are slightly drunk and easily amazed.

But you do not want to be that person who is constantly picking up three things are throwing them in the air and demanding people watch them juggle. Rule of thumb: Juggling is only interesting for like three minutes tops. Unless one of the things is on fire or a power tool.

Rapping entire songs gets tiring for everyone else.

The same thing goes with rap songs. Yeah, it's cool to know a few lines but rapping the whole thing is annoying.

I found a solid balance with knowing Big Bois verse in Rose's by Outkast. Impresses enough people and it's the one part of the song no one really minds anyone hopping on. -Dupragon

There are only two ways to do magic: just a little bit or professionally.

It's good to know a couple really well to get a few laughs, but after that you're kinda weird. -I_hate_traveling

No offense to any amateur magicians but for some reason, it weirds people out when someone is too into magic.

Yup, a trick or two is fun...a performance will make people quickly start wondering why a grown man has so much free time for magic tricks. -ruskuval Yeah, that's probably it.

It's no fun to play bar games with people who are too good.

Not only does it make you seem like a weirdo if you've gotten great at darts, if you mop the floor with everyone then no one will want to play with you because the game isn't fun anymore. If you get great at darts you can only play with other people who take it as seriously as you do. Which is antithetical to the whole point of bar games, which is to have a fun time with your regular friends. -cartoonmummy

Everyone wants to be amazing at a this but the truth is, it's better not to be.

Yeah, singing too well at karaoke takes away that “Let’s just enjoy ourselves and bond over a popular song despite how bad we sound!!" kind of irreverence.

Meanwhile Mr. Perfect over here is singing like Josh Groban by himself. -OddEpisode

It's not an audition.

People get wayyyy too into it here in Nashville. Everyone thinking they'll be "discovered" like no, Alicia, you're in a lesbian bar on a Thursday. Lower the bar. -SquidwardsKeef

I have a serious question: does anyone actually know about wine?

Ordering/buying wine. I love it when someone has some knowledge and is able to order a good bottle from the bottom half of the price list. On the other hand, I've been out with wine snobs who just order the most expensive bottle and then prattle on about taste, complexity, soil etc. It's pretty obnoxious and most of the time I don't think they know that much. -MookieBlaylock10

Unless you're a kid, it is annoying to be too good at this.

Hula hooping. Get going and people are like, "Good for you." Do a couple of tricks for the fun of it, and you're a showoff. -britva836

If you can pack yourself into a suitcase, you may have gone too far.

Being really flexible. Pretty good at some difficult yoga position is kind of cool. Too good, like a contortionist, and it becomes uncomfortable to look at. -IrianJaya

There's at least one person in every office who will agree heartily with this:

Don't get good at Excel. It's a trap.

Be good enough to save yourself a lot of time.

Too good though, and you become THAT dude and you'll never have a free minute to yourself from all the people wanting Macros, etc. -BabaYaga2017

Sometimes you want to be a little rusty.

Mario Kart. It’s such a casual game that when you can consistently get first place it hurts the fun for the group. -Dinosity101

Do people still do this?

HackeySack -gochet People will wonder why you have been hanging out at so many college campuses circa 1993.

Office quotes. -jacoobz Knowing when to throw in the perfect quote from The Office for the situation is funny. Yelling "That's what SHE said!" every chance you get actually just makes you Michael Scott.

Quoting things in general is an art.

You never want to be that person who only says movie and tv shows quotes and never has anything to actually contribute to a conversation.

If you are really good at phone games, just keep it to yourself.

Being really good at Candy Crush might be personally satisfying, but it’s not something you’d want to brag about. -helecho

This goes from a useful skill to creepy very fast.

You my think it's annoying when people are loud walkers, but the inverse is also weird.

I can attest to this. My dad taught me how to walk without breaking twigs or making much noise when I was a kid because we went hunting all of the time. It kind of became my natural gait and now I accidentally sneak up on people at work a lot. -Localhermit

Unless you work at Victoria Secret, this can get weird.

It's impressive at first, but it can take over your personality to be good at this.

Years ago, I crossed the 1-minute barrier to solving a Rubix cube. I realized I didn't want to be that Rubix-cube-solving-fast guy, so I set my hobby on the shelf, not to be picked up again. -yeahdef

Your friends and family will latch onto this information like leeches.

That was my first roommate in college. Loved the Pittsburgh Pirates and Penguins, and could solve a cube in 14 seconds flat. And there wasn't a single damn thing to his personality besides that. He was the Rubik's Cube kid. -chinoyindustries

You never know if an actor is being themselves.

Gets too close to lying and makes people extremely uncomfortable and mistrusting. -infini7

Good for Jeopardy, not great for real life.

Factual knowledge. You just reach the point where you feel the need to state random facts that are just the tiniest bit related to the conversation just because your brain goes like:"uuuuh, uh huh, I know that!" -Deranged_Loon

This ends up happening:

This eats me up so much. We were a really big trivia and facts family since both my parents had their Ph.D.’s and were really nerdy. Now, whenever I’m having a conversation especially in a group I cannot stop myself from essentially paraphrasing the Wikipedia entry of every interesting or cool relatable thing in the conversation, especially if it’s in a conversation I’m uncomfortable in which is a lot of them. -Acthelior

Don't be a weirdo.

Doing voices. Its fine if you can do a good Mickey Mouse, but if you can imitate my grandmother that you met once four years ago we need to have a talk. -KrackerJoe

True crime is really in right now, but this is still weird.

Knowing an increasingly disturbing amount of facts about famous as well as more obscure serial killers. I know way too much, mention a name and I can rattle off how many confirmed victims they’ve had what they did and how, mention a victim and I can tell you the killer, mention a weapon or even just how someone was killed and I can tell you multiple killers who could be who you’re talking about. In short, I’m basically murderpedia. -fuzzyoctopus97

You don't want it to seem like you practice this at home.

A guy at taking off bras. -StarfishOctofish

Making fruit salad. I once made a fruit salad so good that my French teacher ate some and fainted; she hit her head on the doorstop-brick as she fell and cut her head. The trick is to use lemon juice to stop your fruit going brown, also chuck pomegranate seeds in, hell yeah. -Frogget__Montgomery Was... she okay? That must have been some amazing fruit salad.
20%

$49.95 $37.96
Buy Now
See More Deals
We hope you find these deals as awesome as we do! Just an FYI: we may receive a share of sales from links on this page