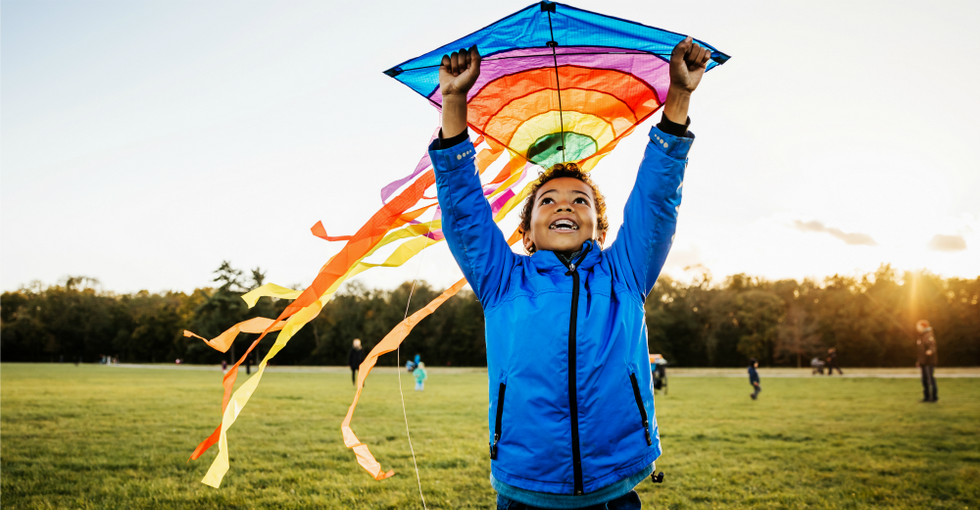 Being a kid was awesome. You had zero responsibilities (besides chores, which were, let's face it, basically just busy work), you could make friends instantly based on nothing more than proximity, and you could do or say whatever weird thing popped into your head without feeling self-conscious about it. But once you reach a certain age, the adorably wacky antics of youth start to seem a whole lot less adorable and suddenly much creepier. Sure, running around naked while giggling was a barrel of laughs as a two-year-old, but once you reach adulthood it can be pretty off-putting.

These 30 people reveal the one thing they used to love doing as a kid that would be totally bizarre to do as an adult. Each one will instantly transport you back to your childhood and make you realize how lame it is to be an adult.

Seriously, who wants to have a super soaker fight with me?!

"In the middle of the night, creep into your parents' room and stand 2 feet away from your sleeping father's face just staring at him until he wakes up and has a f****** heart attack."

"JK, that's still creepy AF when my kids do it."-andthenhesaidrectum

"Sprinting down the sidewalk in a large city."

"When I see kids do it, totally normal. When I see adults do it, I assume something is seriously wrong."-uwsrunner

"As a kid, it was playful and fun. As an adult people think you’re trying to break into a house and call the cops."-Radthereptile

"Hugging someone so intensely that your face is directly in their crotch."

"Invite complete strangers to come play with you and be your friend."

"On a side note, I wish we kept the whole 'wanna be friends?' part of childhood. Making adult friends is hard!"-Designertoast

"One of my cousins has a small child who likes to lift his mom's dress or skirt and hug her leg."

"Everybody thinks this is insanely cute. If I did that, I would probably be excommunicated from the family and put on creeper watch."-eddie09876

"While it's not the best behavior, throwing a tantrum as a child is not really that weird, but an adult throwing one definitely is."-eDgAR-

"Running around the house naked when there are guests over."

My friend had a sleepover for her birthday. Her brother, who was maybe 2 or 3 at the time, was due to have a bath. He played a game his family called 'naked man' where they would just let him roam the house naked for a while before he'd get in the bath.

He ended up standing at the French doors between the hall and the room we were watching our movies in, just splayed against the glass for all of us to see. She was mortified but we didn't care, it was cute.

To break the tension one of our other friends said, "Oh don't worry about it, my brother does that all the time". It took us all a beat to register that her brother was a teenager."-caca_milis_

"S*** in your pants and have someone else clean it up."

"Although, this then goes full circle and becomes acceptable again if you live to the latter stages of adulthood."-Tattoos_and_vtec

"Based on a thing I witnessed yesterday: Sitting in a little shack on a playground, observing the children, before just jumping on your bike to (probably) head home."

"I thought he had kids on the playground himself and didn't say anything because of that the whole time, but nope, he drove away completely by himself.

He didn't do anything, but thinking back he seemed pretty creepy."-McWaffeleisen

"Skipping through the street."

"Seven-year-old me was cute doing it, but a six-foot-five man skipping looks like I'm on crack. But f*** the haters. It's too fun to not skip sometimes."-TheHyperLynx

"When I was a kid, I traveled as an unaccompanied minor a lot on planes."

"One of my favorite things to do was to stare at each person as the passed me getting off the plane, smile hugely at them, and count how many smiles I got back.

"I teach a lot of elementary school kids and honestly every single one of them scratches their balls without any sort of... Discretion? Is that the right word?

Like they're not even hiding and just go full-on scratching in front of everyone. Sometimes they do it through their shorts and sometimes they just straight up dig their hands into their underwear and scratch.

If I did that in public I'd probably be arrested for sexual harassment."-Mathilliterate_asian

"I feel like when you are meeting someones kids for the first time it is super normal for them to crawl on/hold hands/be affectionate. It makes me SO uncomfortable but is also really normal. At some age, you obviously cross a threshold of giving each other personal space."-

"If adults screamed whenever they got excited or sad then the world would be a much more scary place. Imagine somebody is at the grocery store and the kind of chips they want aren’t there so they just sit, scream, and cry until something distracts them from their missing chips."-edaug7

"My daughter likes to pretend to be an animal or mythical creature (mostly dragons) running around on all fours and roaring/hissing and stuff. She really gets into it, and sometimes this happens in public. It's a little awkward, but I figure this is just stuff that kids do sometimes. Now I'm imagining how it would go down if I did some s*** like that in the checkout line at the grocery store." -Reddit user

"Run with wild enthusiasm when the ice cream truck approaches."

"I did this the other day and got some looks."

"I used to love going to Home Depot and crawling behind the boxes in between aisles and claiming spaces as my territory."

"I imagine that would be pretty weird now." -peridyy

"I played with toys up until I was 16 and even my friends at that age would tell me it was weird and creepy.

As an adult, if you wanna play with toys, you have to play D&D with minis or something.

Gotta be sneaky about it."

"Marching proudly as a toddler into a room of your parent's friends in a diaper and declaring loudly 'I'm gonna poop!'"

"...And then doing so whilst making unblinking eye contact with everyone in the room...." -limitedfunctionality

"Having an imaginary friend that you have a conversation with."

"Bonus points for things like setting up the table for your imaginary friend." -DerpingOnSunshine

"At 17, full-grown, approaching a random house, with a smile, holding up my bag... Just kept getting weird looks.

My mom later had to break the news that I looked creepy.

"I had gotten into a car accident when I was in college and had to take the bus to and from school.

There was this beautiful French girl that would suck her thumb the ENTIRE trip. Some of you might think it could be sexy, but I promise you it was anything but."

"Climbing on all fours, at full speed when going up the stairs!"

"I still do this sometimes but only when I'm alone at home or ironically only when I'm back visiting my parents in the house I grew up in." -LMAC92

"Wandering around your condo complex alone, with a water gun, stealthily aiming it at random things and squeezing the trigger."

"Watched our neighbor's kid doing this yesterday. Felt a tad bit jealous I couldn't join in."

"As kids, my brothers and I used to run through our neighborhood using backyards as cut-throughs and hiding in people's bushes and climbing trees."

"Now it might cause concern if a bunch of grown men were high tailing it through the yard and hiding in the bushes." -Unbuttonedbuttondown

"I would always run up to anybody with grey or white hair and yell 'grandpa!' and ask to be picked up."

"We lived in a small town, so usually they would and my mom would apologize and they more or less loved it and said it was fine. I don't think that would fly now that I'm 20." -peterjmonday

"Go into bathrooms of the opposite sex."

"As a child, I would always go into the women’s restroom with my grandmother because she didn’t want me to be by myself in the men’s room as a 4-year-old boy.

But a grown man in the women’s room is typically frowned upon."

"Seriously, have you seen an adult crawl recently?

"Some kids on my street look into the windows of all the houses as they run past."

"And while that's already unsettling when they do it I imagine it'd way worse if a full-on dude did it." -Reddit user