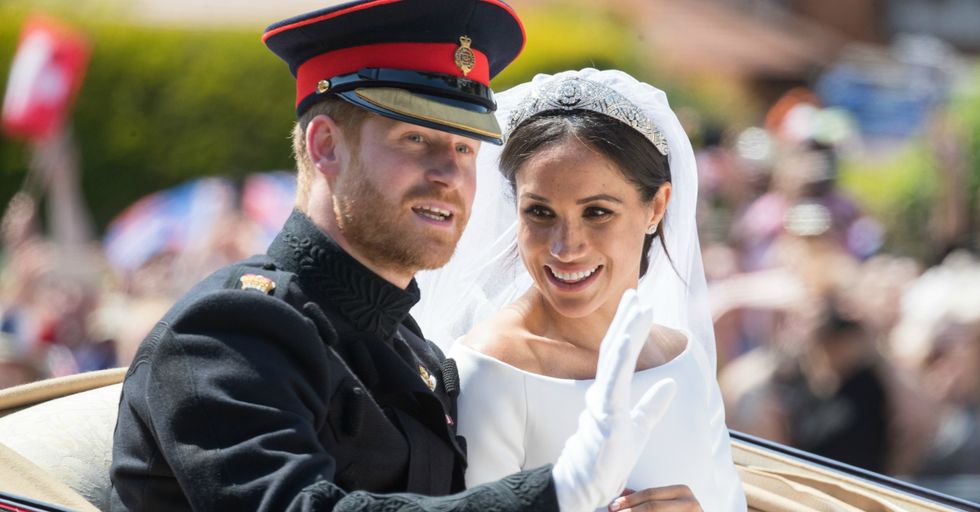 35 Things You Might Not Know About the British Royal Family

With Prince Harry and Meghan Markle’s wedding, the rest of the world has caught the royal family fever!

In honor of the nuptials, we’ve put together a list of 35 things you might not know about the British royal family.

The queen has twice the birthdays of everyone else!

Yep, the queen has two birthdays: her actual date of birth (April 21) and a designated “official birthday," which typically falls in May or June but varies by each Commonwealth country.

She can do it!

Queen Elizabeth II—Princess at the time—joined the Women’s Auxiliary Territorial Service during World War II, serving as a driver and mechanic.

The queen married her third cousin.

Kate Middleton is the first royal bride with a degree.

With a degree in art history from the University of St. Andrews, Kate Middleton is official the first woman possessing a degree to marry into the royal family.

While on a 10-day safari in 2010, Prince William proposed to Kate after carrying his mother’s 18-carat ring around with him for days, waiting for the right moment. This family is dedicated to their fans! Read on to see how they handle being royal celebrities…

The family answers their fan mail.

William and Kate received over 60,000 pieces of fan mail for their engagement and wedding, and every single letter with a return address was sent a reply.

They’re not so different from the rest of us.

In his earlier years, Prince William worked on a dairy farm, earning roughly $5 an hour to milk cows.

Harry, after graduating from the Royal Military Academy as a Second Lieutenant, went in secret to serve on the front lines of Afghanistan in 2008. His tour was interrupted when the media found out about it, and he went home in 2012.

Prince William had a crush on famous supermodel Cindy Crawford when he was 13, and his mother thought it’d be fun to have her join them for tea.

Her father, a manager for British Airways at the time, followed a job opportunity to Jordan. The family lived there for two years (starting in 1984) before returning to England. Had history taken a different turn, we might have a completely different royal family in the spotlight. Keep reading to find out why!

Queen Elizabeth II became heir presumptive to the throne at age 10, after her father unexpectedly became King. Elizabeth’s uncle, King Edward VII, and his descendant were the original heirs to the throne, but he abdicated in 1936.

When the two future-spouses met, Princess Diana was 16 years old, and Charles was dating her older sister.

The queen has a master plan to avoid wardrobe malfunctions.

Queen Elizabeth II has weights sewn into the hemlines of her clothing, ensuring that no mishaps will occur.

The princess found out that her father had died, and became queen, while on a royal tour in Kenya at the age of 25.

Queen Elizabeth II recently became the first British monarch to have a sapphire jubilee—a milestone marking 65 years of her reign. On the next page, check out some of the crazy etiquette laws that surround the royal family—and Queen Elizabeth’s nickname!

The Royal Family didn’t always have a last name.

Until 1917, the Royal Family didn’t have an official last name. George V (pictured above) changed the family name to the House of Windsor at that time, and in 1960, Queen Elizabeth II decided that her own direct descendants would use the surname of Mountbatten-Windsor.

If you visit a royal building: whatever you do, don’t die.

It’s actually illegal (and quite rude) to die in any royal building, including the Houses of Parliament. I guess it would be pretty disruptive.

Legally, reigning monarchs don’t need to have a drivers’ license or passport. The queen probably don’t need identification papers when she could just pull out some money and point to her face.

The queen’s nickname, Lilibet, stuck after she had trouble pronouncing her own name as a youngster.

Of course, the hostages are treated well as it’s now a ceremonial tradition rather than a straight-up kidnapping. Nevertheless, every time the Queen attends the State Opening of Parliament, a ‘hostage’ is taken. The rule comes from a time when the royals and Parliament had a rocky relationship, and said hostage was actually used to make sure the Queen returned safely to Buckingham Palace. Next up, you won’t believe what hilarious Christmas tradition the royal family keeps!

The royal family’s Christmas traditions are very normal in comparison to that last 'hostage' one.

The family has a funny gift exchange each Christmas, with the ‘worst’ gift-giver winning a prize. Princess Anne apparently once gave her brother, Prince Charles, a white leather toilet seat. Even better, Prince William is said to have given his grandmother (the Queen) a bath hat that read ‘Ain’t life a bitch?’ Pretty great, as gift exchanges go.

The queen has the final say on family marriages.

By law, the first six people in line to the throne have to get a marriage license from the Queen. She’s got veto-power, and could stop a wedding cold in its tracks if she opposed it.

Marrying into royalty doesn’t mean you ascend to the throne.

The current monarch adheres to this; Queen Elizabeth II rules, with her husband Prince Philip is officially titled the King-Consort—he can’t become the King himself. If Prince William becomes King, then his wife Catherine will become the Queen-Consort.

When taking a meal with the queen, everyone is required to put down their utensils and stop eating when she does. This includes all other members of the royal family.

Non-royals touching the royal family is considered taboo, although the rule is often violated when the royals meet with other celebrities or leaders. Read on for one group activity the royal family isn’t allowed to do together. The reason will surprise you!

Certain board games bring out the royals’ competitive sides.

According to Prince Andrew, the Duke of York, the game Monopoly is banned at home because “it gets too vicious."

One last fact about the royals and Africa:

It’s also where Prince Harry and Meghan Markle fell in love! Just a few weeks into their relationship, Markle accompanied the prince on a trip to Botswana—and returned the next year too.

The queen has serious bling.

Lobster is off the table!

As on old rule, the royal family is not served any kind of shellfish to protect them from food poisoning. Prince Charles is known to disregard this rule. On the next page, find out about some of Queen Elizabeth’s adorable furry family members!

The queen has been wearing the same nail polish since 1989.

According to cosmetic company Essie, Queen Elizabeth II’s hairdresser wrote to them requesting a bottle of “Ballet Slippers" nail polish, calling it “the only colour Her Majesty would wear."

The royal family always has black clothes in their suitcases.

The royals are apparently required to pack black clothing when they travel, just in case somebody dies while they’re gone. Morbid, but effective.

The queen sends signals with her handbag.

For instance, if you saw the queen move her handbag from one hand to the other, it would be a signal that she’s ready to end whatever conversation she’s in.

Those hats we saw at Prince Harry and Meghan Markle’s wedding (and every royal wedding) weren’t just for fun.

It’s also a rule. If you attend a royal wedding, you wear a fancy hat!

She used to breed them, and still keeps them as pets. She also presently owns a couple of dorgis (dachshund and corgi mixes).