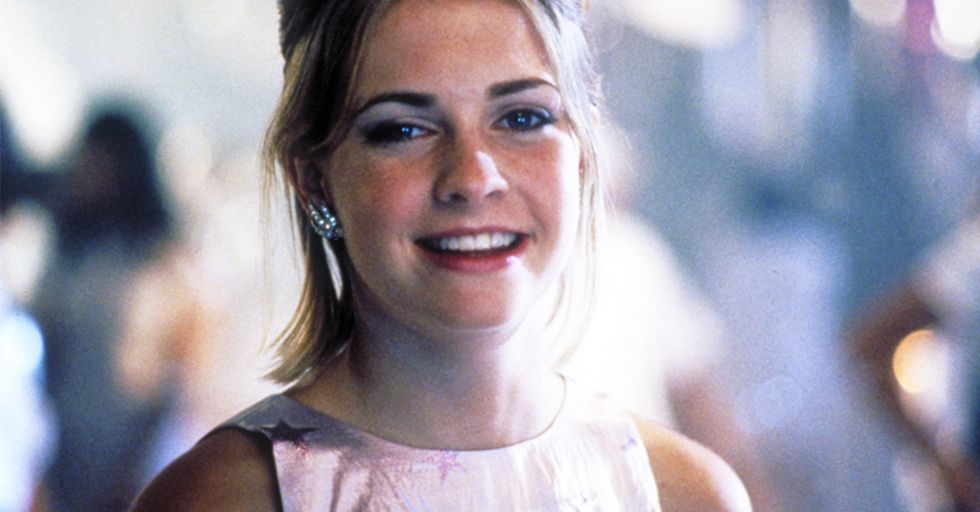 Clarissa Explains It All is one of the most classic and brilliant Nickelodeon shows of the golden era in the '90s.

Melissa Joan Hart will forever be in our hearts as the sassy, free-spirited, and confident Clarissa!

While Clarissa claims to have explained it all in her show, there are some things we still don't know.

Believe it or not, there are 19 behind-the-scenes facts that you probably never knew about Clarissa Explains It All. Luckily, we're going to explain them all right here!

Mitchell Kriegman, the show's creator, had a crazy career before Clarissa.

Before he created Clarissa Explains It All, Kkriegman wrote for big-time shows and publications like Saturday Night Live, National Lampoon, and The New Yorker. No wonder his show was so beloved by smart kids everywhere!

Clarissa was only the second sitcom on Nickelodeon.

Back in the day, Nickelodeon was mostly game shows and Nick at Nite programming. The only sitcom they had before Clarissa was Hey Dude.

Kriegman got input from his wife when writing Clarissa's character.

Kriegman strove to make Clarissa as real and nuanced as possible. Luckily, he had a great source of information about young girls from his wife, who was an editor at Seventeen magazine at the time.

Kriegman will not reveal why he named her Clarissa.

Kriegman told Mental Floss, "That's a secret that's going to go to my grave with me. The only thing I can say is that I intentionally picked a name that she could say she hated." The next one might seem obvious once you read it.

Kriegman did reveal the inspiration for Clarissa's last name...

Clarissa Darling is an homage to Peter Pan, of course! You can totally see it — the show has that same whimsical quality to it.

Melissa Joan Hart auditioned for a role on Blossom.

In her book, Hart explains that she auditioned for the role of Blossom's best friend, Six, at the same time she was in the process of auditioning for Clarissa. She decided that Clarissa was the perfect role for her, thank goodness!

There was another girl up for the role of Clarissa.

Could you imagine Clarissa in the hands of anyone other than Melissa Joan Hart?! It almost happened. Kriegman said there was another actress who very much was Clarissa, but that he ended up choosing Hart because "she was so charming and she just lit up the screen."

Someone else played Clarissa's best friend Sam in the pilot episode.

But actor Sean O'Neal landed the role permanently. He recalled his audition in Slimed: An Oral History of Nickelodeon's Golden Age: "I was there for a few minutes, possibly had read a scene, and then Mitchell asked me to leave the room. Before I stepped out, though, he asked me to mess up my hair. "I was a nutcase when I was in school and a little bit of a class clown, so I always used to rub my heavy-duty cowlicks, which made my hair stand on end. When I left the room and messed up my hair, I came back in and Mitchell said, 'Yeah, you've got the job.'"
Buy Now

Sam's ladder was only 3 rungs high.

Yeah, he wasn't climbing a huge ladder every time he entered Clarissa's room. In fact, it was so short that he had to lie on his back and wait for his cue to put the ladder on the windowsill and then pretend to climb in. The next one is something you've probably never thought about...

Kriegman was insistent that sibling rivalry be a big part of the show.

"I went into the show wanting to do sibling rivalry," Kriegman told Mental Floss. It was actually a really big deal to have Clarissa actively hate her brother Ferguson because while sibling rivalry was a part of many primetime shows, it wasn't ever really in a kids' show before Clarissa.

In it, he refers to Clarissa as "the Ferris Bueller of girldom, but also kind of Calvin of Calvin and Hobbes." That's a pretty accurate description if you ask me.

In many of our memories, he was a huge part of the show. But that's not actually true. Elvis only appeared in six episodes! He was deemed too boring to keep cutting away to.

The network thought Clarissa was rude.

"The initial response was that she's rude," Kriegman told Mental Floss. But if you're a woman, you know how these things go. And so did Kriegman. "That's usually the initial response to my girl characters," he said. "And I always say the same thing: 'If a boy were saying this thing, and doing this thing would you be complaining that they are being too rude, or they're being too sarcastic or jokey with their parents?' The answer's no."

The show had an all-star staff of writers.

Among them was Suzanne Collins, who went on to gain international fame after creating The Hunger Games. Other writers included Doug Petrie (Buffy the Vampire Slayer), Patricia Marx (Saturday Night Live, The New Yorker), and Glenn Eichler (The Colbert Report, Daria). The next one is so '90s you won't be able to stand it.

The shows news graphics were way ahead of their time and super hard to make.

Nowadays, they'd be simple to construct, but that was not the case back in the '90s. They required the use of a special computer called the Quantel Paintbox. That sounds so intense.

The entire set was without purple...for no reason at all.

Kriegman had a rule on set that no one could use purple. Not on set, not in costumes, not even in people's offices. Nowhere! But why? Well, Kriegman said that Clarissa was the first big show he ran, and someone advised him to come up with some arbitrary thing that everyone has to do and stick to it and never give a reason for it. It would be the way he would assert himself. He didn't really have anything against the color purple, but he chose it and stuck to it!

The show was canceled because Clarissa got too old.

In its fourth season, Clarissa was canceled. But it wasn't because of poor ratings; it was because Clarissa was almost 17 and had aged out of the Nickelodeon oeuvre. Kriegman told Mental Floss that Nickelodeon was really strict about their age range in those days. "Nickelodeon stopped at 14, and MTV started at 15 or 16, and there was no middle ground," he said.

There was almost a network spin-off.

It was going to be called Clarissa, and Kriegman pitched it to CBS in 1995. In it, Clarissa deferred her college acceptance to intern as a reporter at a newspaper in New York City. Kriegman got pretty far in the process; sets were built, and the show was cast. But a lot of the whimsy and fantasy was stripped from the show, and it never got off the ground.

But, Clarissa lives on in Kriegman's Clarissa novel, Things I Can't Explain.

In it, Clarissa is 26 and lives in NYC. Kriegman told Flavorwire that it answers every question that remains about Clarissa, "Everything is dealt with," he said, "from where her [fashion] sensibility comes from to what happened to Elvis to what she's doing now and what's hard about her life to her relationship with Sam, obviously, and how things change in your 20s." Share this with a Clarissa fan in your life!