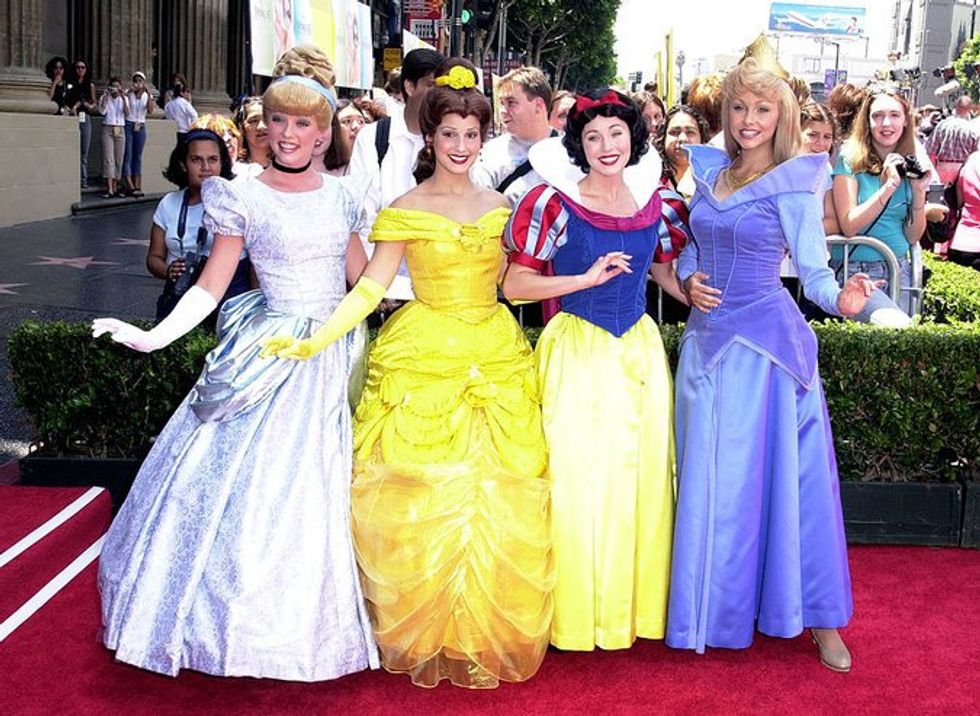 40 Things You NEVER Knew About Your Favorite Disney Princesses

You most likely grew up watching the classic Disney movies with princesses you would pretend to be while wearing a costume from Toys"R"Us as you danced around the house. Maybe that was last week for you — no judgment, you do you — but most likely it's a cherished childhood memory.

But did you know those girls were holding out on you? How old is Snow White really? And what size shoe did Cinderella wear? Exactly.

You don't know all of their secrets, until now...

Ilene Woods, who was the voice actress for Cinderella, recalled good ol' Walt saying, "You're my favorite heroine, you know." She said, "You mean Cinderella?" "Yes," he said, "there's something about that story I associate with."

When she's happy, the castle is blue. It turns red when she's scared, yellow when she's angry, and purple when she's sad. When she's really moody I imagine it looks like a disco ball in there.

The only princess who sings a duet with a villain is Anna from Frozen.

Apparently bad guys aren't so into singing little musical numbers with the people they're about to try to destroy — except Hans — he can't keep that song to himself.

Sleeping Beauty only has 18 lines in the whole movie, the least of any princess.

That makes sense, seeing as she's sleeping most of the time. How can I get that gig?

"Part of Your World" was almost cut from The Little Mermaid.

Why? Because some kid in the test audience spilled his popcorn, which made the studio chairman think that children would find the slow song boring, instead of just thinking that kids spill crap all the time.

Belle is the only person in her town who wears blue.

This was done to show that she didn't fit in. But if you pay attention, you'll see that The Beast is later wearing blue, and he has blue eyes, so it was basically meant to be — if you're into hairy guys.

That has to set some sort of tiny foot record. And honestly, how hard could it be to find whose shoe that was? Are there that many people in the town with teeny tiny feet?

The only Disney princesses who wear pants are Jasmine and Mulan.

In other words, they were the most comfortable princesses in all the land.

Ariel is the daughter of Triton, who is the son of Poseidon, who is the brother of Zeus and the father of Hercules. Can you imagine the volleyball game at that family reunion?

The disagreement over Aurora's dress color stemmed from a real-life debate.

Supposedly there was a disagreement in the studio about the princess's dress color should be, so art ended up imitating life. They were doing their own, "What color is the dress?!?" thing before that was even cool.

Beyoncé was almost the voice of Princess Tiana.

Apparently she wasn't Irreplaceable though, because her Dreamgirls castmate Anika Noni Rose got the gig after Queen B didn't think she should have to audition. Hey, fair is fair.

Every princess except Merida has an American accent.

Which is odd, considering that the Disney princesses are thought to hail from many different countries.

See? Walt really did have a thing for Cinderella.

Mulan and Princess Tiana are the only left-handed princesses.

If you will recall, Ariel signed over her voice and combed her hair with a fork with her right hand.

The only Disney princess who has hazel eyes is Belle.

To be honest, they look kind of brown, but that's the deal with hazel eyes — they kind of just look like every color.

On a similar note, Sleeping Beauty's Aurora is the only princess who has violet eyes.

In case there was confusion, Ariel was made a redhead to differentiate her from Daryl Hannah's mermaid character in Splash.

Since Splash came out in 1984, Disney creators wanted Ariel to stand out by giving her bright red hair. Because, you know, it's hard to tell a cartoon from an actual woman/mermaid.

The strand of hair that always falls into Belle's face wasn't meant to be a fashion statement, but rather to show that she didn't have it all together.

"The only thing I wrote [to describe Belle physically] was 'she has a little wisp of hair that keeps falling in her face'," said Linda Woolverton, whose turn as Beauty and the Beast's writer made her the first female to pen a Disney movie. "Because I wanted her not to be perfect. It was important that not every hair be in place."

The only princesses with more than one love interest are Pocahontas and Princess Anna.

Pocahontas is courted by both Kocoum and John Smith, and actually John Rolfe if we're looking at the second movie and/or historical facts. As for Frozen's Princess Anna, she's pursued by Prince Hans and Kristoff. It's hell being pretty, you know?

The dance between Prince Adam and Belle at the end of the movie is recycled from Sleeping Beauty.

Ummm...awkward. Disney was running out of time during the production of Beauty and the Beast, so they just reused the animated dance between Princess Aurora and Prince Phillip from Sleeping Beauty.

Cinderella loses her shoe not once, not twice, but three different times throughout the film.

First, when she is delivering breakfast to her stepsisters and stepmother, second, when she is running away from the castle at midnight, and finally, as she runs down the stairs at her wedding. Crazy thought: Maybe get shoes that aren't slip-ons.

Belle's personality was inspired by Jo March from Little Women.

Linda Woolverton said she drew inspiration for Belle from Katharine Hepburn's interpretation of Jo in the 1933 version of Little Women.

The only princess who ever had an official job was Tiana.

Work it, girl! Although Cinderella worked her shoes off, she never got paid for it. Figures.

Pocahontas almost had a different sidekick.

She was going to have a speaking sidekick — a talking turkey named Redfeather — with a voice by John Candy, which would have been pretty great. But filmmakers decided to stick with mute sidekicks, and so we were given Meeko, who was still kind of great.

Elsa is the only princess who isn't a teenager.

She's actually 21 years old, which means she could keep some beer on ice in that Frozen castle of hers.

But Snow White? She was only 14 years old.

The only Disney princess to kiss a villain was Jasmine.

I guess she took one for the team, but...yuck.

The only princesses to encounter snow were Belle and Mulan.

Until Frozen happened, of course.

Aurora was the last princess to make her debut before Walt Disney's death.

He passed away in 1966, 23 years before The Little Mermaid. Not that it matters though, because remember, he loved Cinderella best.

The only Disney princess whose character is based on a real person is Pocahontas.

It turns out that mermaids don't really exist.

Mulan is based on a legendary Chinese female warrior.

In the original story of Hua Mulan, she pulls the wool over on her army buddies for much longer, not revealing that she's a woman until after the war. But, unlike Pocahontas, there isn't solid proof of her actual existence.

Elsa was originally the villain of Frozen.

The Snow Queen was originally an over-the-top villain, and not Anna's sister. But when the writers heard "Let It Go," — which we still can't get out of our heads — they decided to change the whole plot. Probably a good call.

If Merida straightened her curls, her hair would be four feet long.

Which would be shorter than Rapunzel, but still reach her mid-calf.

Mulan and Pocahontas are the only characters in the official Disney princess group who are not "technically" princesses.

Mulan isn't born royalty, and she doesn't marry a prince. Pocahontas is a chief's daughter, which is cool but still doesn't quite count.

That was quite a dry spell, as the princess who came before her was Aurora when Sleeping Beauty came out in 1959.

The only Disney princess with a tattoo is Pocahontas.

But it's not a butterfly on her lower back, so that's a relief to us all.

All I can say is that her shower drain must be clogged at least 99 percent of the time, because that's a lot of hair.

Apparently animator Glen Keane, who went on to create the Beast and Aladdin, looked at photos of young Milano — as well as several other young girls, which sounds kind of creepy — to see what was considered attractive at the time.

The only princess with dimples is Tiana.

Yes, there is an official Disney princess lineup.

And it includes Cinderella, Belle, Ariel, Rapunzel, Tiana, Snow White, Mulan, Aurora, Pocahontas, Jasmine, and Merida. It doesn't include Anna and Elsa yet, but they're next up to be added, followed by most recent favorite Moana. And they all lived happily ever after!