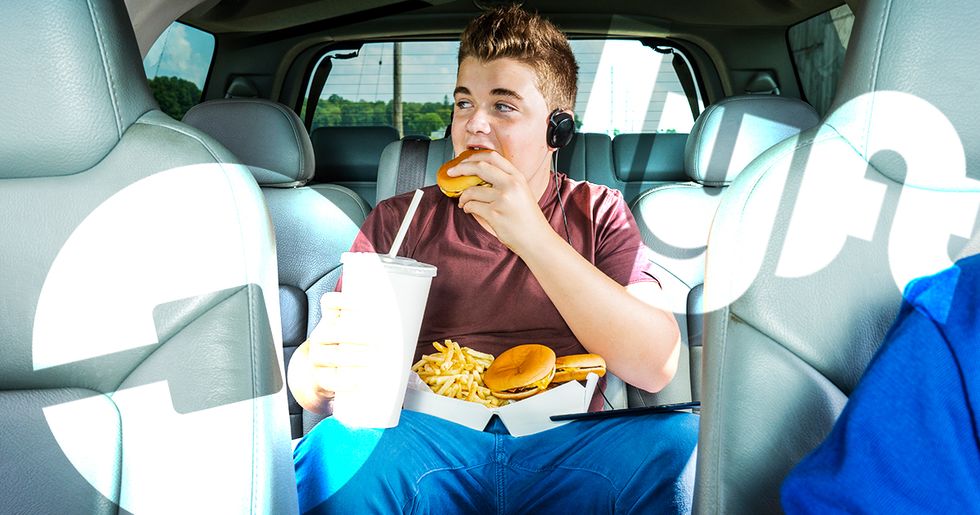 I've always thought there should be a simple check mark in the Uber and Lyft apps that, when selected, would tell your driver, "No offense or anything, but I just want to ride in silence." There's nothing worse than hopping into the backseat — headphones already in, mind you — and having to say, "Sorry, I just want to watch video game conspiracy videos on Youtube." I feel like such a jerk! It's not a good way to begin a driver-drivee relationship.

So you can see why it's such a big deal when I say that there needs to be more communication between Uber/ Lyft drivers and Uber/ Lyft customers. If a rider is doing something trashy in the backseat, a driver isn't necessarily going to say something right then and there, because it could endanger their tip.

That's why we're so grateful Uber and Lyft drivers are talking about some of their riders' less-than-polite behaviors. It makes for a great chance for every one of us who use these services to take a deep breath, check to see if we do any of these obnoxious things and try to curb that behavior... before our drivers curb us.

(By that I mean kicking us out of their cars and onto the curb. That's what curbing means. It is a very real term and not at all something I just made up.)

Uber has made getting around so much easier.

It used to be that you had to drive or bike or hop on the bus or — god forbid — walk wherever you were going. That's why, before Uber came out in 2009, literally no one was on time for anything.

We basically have on-call chauffeurs available with a push of a button (a tap of a touchscreen?).

Now, a car can come to us whenever we demand! It makes getting places on time a lot easier. Or, if you're irresponsible as I am, it makes making excuses for being late a lot easier. ("Oh sorry, my Lyft took a crazy route lol.")

But it can be easy to forget the people driving those cars.

We're talking real life flesh-and-blood human beings, with spouses to provide for and mortgages to make payments on and dogs to buy treats for and video game systems to buy games for.

Ideally, we'd treat them with the same respect as every other human being we come across.

I mean, you wouldn't be rude to the guy who sells cigarettes at the gas station, would you? (Unless they've wronged you in the past, perhaps by selling you the wrong cigarettes. Then, and only then, is an elaborate plan for revenge acceptable.)

But that's, uh, not really the way it goes down, most of the time.

All too often, the people driving these rideshares we all order are forgotten somewhere between our houses and our destinations.

We can be real jerks to Uber and Lyft drivers.

And we certainly don't mean to! I know I just feel awkward saying, "Sorry, not down to chat right now." Then when they keep talking to me, I let it build up until I hold up my phone all snarky-like, as though I was saying, "Look pal, THIS is what I care about right now." It's not nice!

Thankfully, some drivers are establishing some ground rules.

Business Insider spoke to a bunch of drivers to find out what their passengers do to get on their nerves or, even worse, put their very livelihood at risk. Here's what they said...

Listen, we all have busy days. It's tough to find time to throw a salad down your gullet you're trying to get downtown to meet an important client and you're so hungry you're ready to punch through a rear-view mirror. That's why so many people just chow down in the backseat of a Lyft — it's much less painful than punching through the rear-view mirror (and cheaper, too!).

And hey, maybe these drivers are hungry!

Have you ever been starving and then see someone eating something that looks delicious? It's a very specific kind of torture, and honestly, should not be allowed in developed nations.

I can't imagine eating anything in public, let alone in an Uber or Lyft.

All food should be eaten indoors, in your own bedroom, away from the eyes of anyone who could ever judge you, preferably with the door locked.

The drivers' main food complaint, though, is that it stinks up the car.

"Entitled riders think they can eat whatever they want in my car," said one driver. And since every food has a very specific odor, that odor can seep into a car and sometimes, never leave. I remember my uncle used to deliver pizzas, and the smell never left his Ford Hatchback (which was sad, because he loved that car).

And speaking of stinking up the cars, rideshare faux pas number two: some riders do just that in other, grosser ways.

A lot of the Uber and Lyft drivers Business Insider spoke to mentioned the challenges of keeping their car smelling fresh. It seems like every time they figure out one way to mitigate a bad smell, a new, worse smell found would find its way in.

If I'm ordering a Lyft, it's almost certainly because my morning's busted. If I've already overslept and missed the bus, the first thing to get cut from the daily routine is the shower. So sorry, drivers — I've definitely been guilty of this one in the past, and will be again in the future.

I know you love snuggling on up with your German Shepard, but ol' Axel there really needs to get to the groomer, because pet smells travel something fierce.

Wallace, another driver, told Business Insider, "young people get in my car all the time reeking of marijuana." And while I'm all for marijuana legalization, no one talks about its costs — namely, that young people have forgotten how to hide the smell of marijuana in their clothes. (HINT: rub a car air freshener all over your body after you smoke. New Car Smell works best!)

But even though weed makes you super chill...

... There's a pretty good reason you shouldn't smoke up and call a ride.

Wallace went on to say, "if another passenger so much as complains about the car smelling like weed, it can get me deactivated from the app." So maybe don't get your kindly Uber driver fired because you couldn't wait to get to your high school buddies' house to smoke up.

Again, I'm guilty of this one. You see, I am very, very strong, physically. And much like Superman, I feel like I live in a world of cardboard. Sometimes I'm in a hurry and I get out of my Uber too fast, and my overwhelming physical strength just sends the car door crashing back into the body. I've lost many stars because of this, but what does Uber want me to do? Stop working out three to four times a day?

Rideshare faux pas number four: hey, some drivers want to talk to you!

As Business Insider points out, "contact with riders is one of the few human interactions [drivers] might have in a shift, given that they have no boss or office." So by clamming up in the backseat, you're actually depriving your driver of human contact. That's not good for their soul.

Sure, not everyone wants to get into a conversation with their driver...

Sometimes you want to just sit in the backseat and reflect on the biggest questions of our day. For instance, what the hell's going on over on Game of Thrones this season?

This is why the check mark is such a good idea! We can politely tell the driver that while they certainly deserve to interact with their fellow humans, we're just not capable of it right now. It's such a good idea and I can't believe neither Uber or Lyft has implemented it yet!

Rideshare faux pas number five: some parents order a Lyft for their kids.

Kids got to get to school. Parents don't want to take them. Lyft seems like a perfect solution... on paper.

But with just one second of thought, you can see why it's absolutely not a perfect solution.

"No one under 18 should be getting rides unsupervised," a driver named Zachariah told Business Insider. And, like, yeah. Duh. Calling a Lyft for your kid is just leaving them alone with a stranger, which is one of those lessons so self-evident that they don't even teach it in parenting classes. You know how obvious something has to be to not be taught in parenting class? They teach you to peel bananas before you feed them to your kid in parenting class.

Heck, some parents even order Ubers for toddlers and don't have a car seat.

"My main issue is people that use me to collect their young kids from work or doctor's appointments and don't have a car seat," Zachariah said. I don't know what those parents are thinking? Either they assume Uber drivers have car seats in their trunk or they're okay with their toddler just bouncing around the whole trip?

(Honest to god, do parents just not know how to use Uber?)

Parenting is a tough gig, so maybe these parents are just so overwhelmed that, in between cleaning spit-up off their slacks and throwing an orange in a brown paper bag and calling it a cold lunch, they're jamming the "Confirm Ride" button and assuming they'll figure it out later.

(Officially, it's that smirk at the end of the gif that moves it from "a nice" conversation" to "unasked-for flirting".) According to Business Insider, female drivers' biggest complaint was the way men treated them. "I get rude and harassing comments from men in the day, so I don't even want to know what it would be like at night when people are drinking," said another driver, Jenny.

And let's just call that what it is.

It's truly awful that women have to feel like they're at risk just to do a job. We need some sort of backseat-wide shock collar-esque device so women can just light up dudes who start getting aggressive.

We should all do our best to abide by the drivers' requests here.

Uber and Lyft drivers have to pay for their own car maintenance and insurance, have to drive long hours, and are subject to the whims of their customers' tipping generosity to make anything resembling enough money to justify driving. The point is, it's a hard job. Why we gotta make it worse?!

After all, they're the folks who get us where we're going.

Uber and Lyft drivers get us to the mechanics when our car's ready to be picked up, to work when we miss the bus, and to our buddy's house when it's Friday and we got the party started early.

Where would we be without them?

For me, the answer is either at home and sad or walking to Wing Stop for the fourth time this week because I don't have a car and the grocery store is very, very far away.