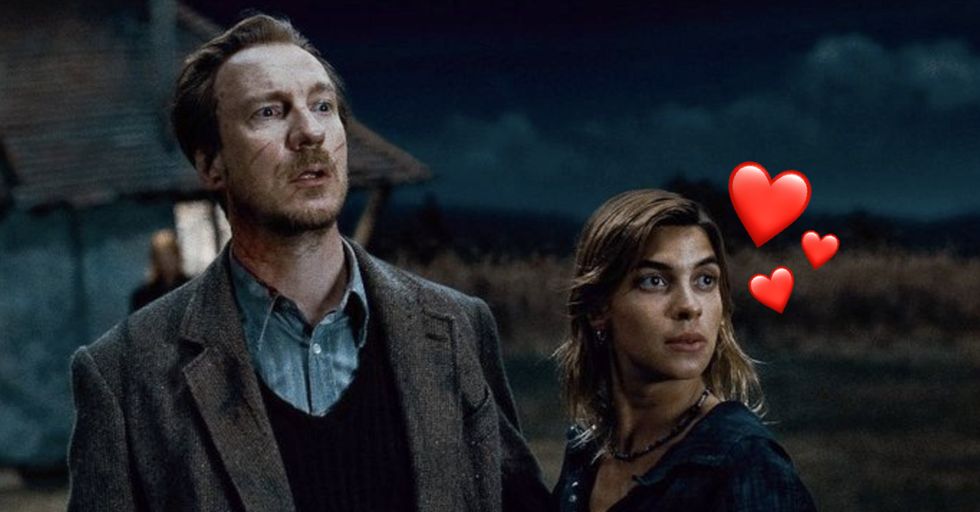 There comes a time in every person's life when they take the Pottermore quiz and figure out which Hogwarts House they belong in.

Some people know deep within themselves that they were born to be a Gryffindor, destined for Slytherin, or intended for Ravenclaw.

...And then there's Hufflepuff.

Now, I'm not saying that Hufflepuff is the worst house. Far from it! But, it's not exactly the house that people look forward to being sorted into. It's just not. If you're a Hufflepuff, you get it.

You took the test with the hopes of being sorted into another, non-Hufflepuff house.

But deep down, you knew. Admit it.

And so did the Sorting Hat.

You belong in Hufflepuff. What now? Well, you start off feeling a little lost and betrayed.

Every time you tell one of your friends you're a Hufflepuff, they look at you like this:

Their looks of pity don't exactly make you feel better about the situation. But eventually...

You just kind of accept it.

After all, the Sorting Hat makes no mistakes. Once you've entered the "acceptance" stage of Hufflepuffism, you'll find yourself defending it to anyone who gives you side-eye. Hufflepuffs have a lot going for them! For example.

They're so close to the kitchens!

Plus, they have Cedric Diggory.

That's right. One of the best (if not the best) characters in the entire Harry Potter universe was a Hufflepuff. Don't believe me? Peep the wiki. Or ask any Hufflepuff.

Apparently, Deadpool is also a Hufflepuff.

Like, canonically, he was sorted into Hufflepuff. In Deadpool #7 (the comic), there's a flashback scene of Wade Wilson attending the release of Harry Potter and the Half-Blood Prince. Wearing a Hufflepuff robe. Nick Filardi (the colorist for that particular issue) said he originally put Wilson in a Gryffindor robe but was specifically given the instruction to change it to Hufflepuff.

And remember the Battle of Hogwarts?

Let's take a little walk down memory lane, shall we? All the Gryffindors stayed to fight — because of course they did; they're obsessed with honor and glory and whatever. All the Slytherins abandoned the fight — again, of course, they did. Some Ravenclaws stayed, while others left. But Hufflepuff? EVERY Hufflepuff stayed. 'Cause they're loyal AF. They didn't stay for glory or pride. They stayed because it was the right thing to do. And if that's still not enough to convince you that Hufflepuffs are the bomb.com, consider this:

That's right. The woman who literally brought each of the four houses into existence has a favorite. And it's Hufflepuff.

So, next time your non-Hufflepuff friends give you a look like this:

You can just go ahead and tell them to cut it right out because you're basically a hero. And speaking of your friends...

You probably have a lot of them.

As a Hufflepuff, you tend to make friends wherever you go. And it's not like you're even trying! People just seem drawn to you.

But you usually have a perfectly good reason for it! Most of the time it's because you were helping someone else (even if that "someone else" was a complete stranger).

On the plus side, you're really good at finding things.

Like, sort of freaky good. Your friends constantly ask you where they left their stuff because you somehow always know exactly where it is. And that's not the only thing your friends like about you.

You're also a great listener!

You've perfectly mastered the art of listening to other people talk without interrupting too much or trying to solve every little problem in their lives.

Basically, your only weakness is conflict.

You hate to see your friends fighting with each other. Luckily (for both them and you), this makes you an expert conflict resolution master.

You give the best compliments.

Whenever someone is feeling down, they know they can come to you for a premium compliment. You see the best in people and have a way of helping them to see the best in themselves, too.

So, yeah, the world may scoff at Hufflepuffs.

But you've gotten to the point where it doesn't even bother you a little bit. Because you know the truth. Hufflepuffs are awesome.

The world could use more of you. Share this with a fellow Hufflepuff!