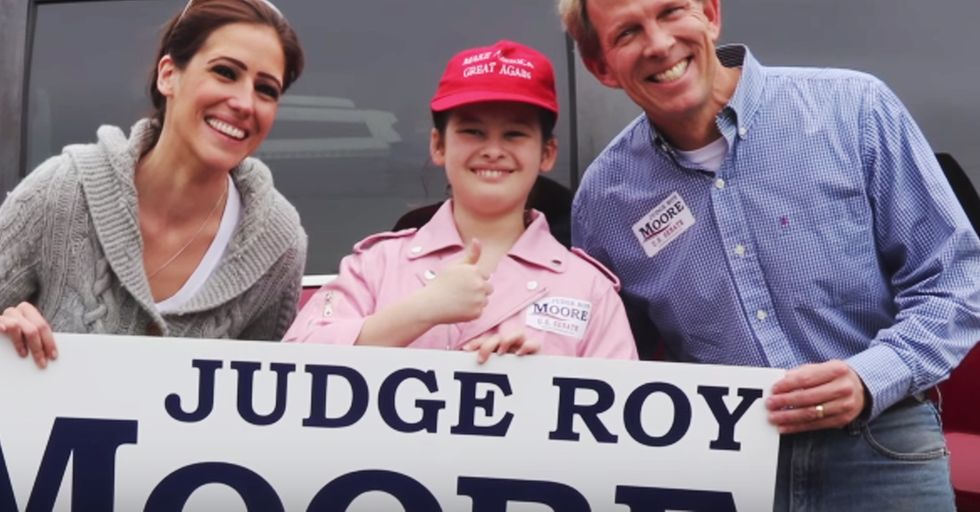 Here's a hypothetical question for you. Say you are a politician in the midst of a massive national scandal because your reported habit of pursuing teenage girls was so bad you got banned from a mall – would you be caught dead in the same room as a teenaged girl? Would you even be caught looking at, or talking to teenaged girls?

What about preteens? Wouldn't that be a NOPE? Wouldn't you think twice about it?

Turns out, we don't have to wonder about this hypothetical, because it's already happened, making us wonder what sort of godforsaken apocalyptic wasteland we landed in and how we got to this place from the Mecca of democracy and common sense that was once our beloved America.

By now, we all know Roy Moore – even though we really, really wish we didn't. The strictly conservative Republican politician has been in the news for the past couple of months because he is accused of preying on teenaged girls. The allegations are dire.

In the 1980s, when Moore was in his thirties, the then prosecutor made a habit of dating teenaged girls and sexually assaulting them, but "only with their parent's permission."

In fact, one woman, Leigh Corfman, alleges that Moore molested her when she was 14 years old. Another, Beverly Nelson alleged that Moore sexually assaulted her when she was 16 until she fought him off. Nelson even has proof that she knew Moore at the time – a yearbook that she asked him to sign some days before he assaulted her outside the restaurant she worked.
In previous days, the signature on that notebook has come into question, with people accusing Nelson of forging Moore's handwriting even though she only added his title and date to the signature as a reminder of who he was. A signature expert has verified Nelson's claims, leading Fox News to issue a retraction of their claims that Nelson had forged Moore's signature and lied about it.
All this is pertinent because Moore is in a heated special election to fill the Alabama Senate seat Jeff Sessions left open when he was appointed to the position of attorney general. This seemingly iffy timing has left many – particularly Alabama voters – wondering why all these allegations are coming to a head now.
There are a few things to bear in mind, however... and they all start with the words Harvey Weinstein. In early October, reports emerged that Hollywood mega-producer Harvey Weinstein had sexually assaulted over 50 women and systematically destroyed their careers and reputations when they made the mistake of speaking out against him.

In the fallout, other powerful men began being accused. James Toback. Matt Later. Kevin Spacey. Mario Batali. The list goes on and on, touching titans of industry, directors, famous chefs, journalists, and even – yes – politicians.
In the wake of the Weinstein scandal, America woke up to an ugly truth that had been festering beneath the surface for decades. Men in power routinely abused women and men of lesser power, and even worse, entire structures were routinely built to support them. Now, it was time for those structures to fall. People who had been silent or even complicit for years, were silent and complicit no more.

#MeToo became the hashtag of the year, and women were finally emboldened to speak out, because, for the first time, people were listening. As long as these women and men were white and of a certain class, people would hear them. Which means the time was finally ripe for Roy Moore's accusers to come forward.
Moore has categorically denied the accusations – in fact, he told Bill Britt, anchor of The Voice of Alabama Politics television show, "Ritual defamation has been around for a long time, and that’s what this is." He has also denied meeting either Leigh Corfman or Beverly Young Nelson, saying, "I had no encounter with them. I have never molested anyone."

Of course, he also, in separate interviews admitted to knowing two of his accusers, one of whom, Debbie Wesson Gibson, he described as a "friend." Gibson says he asked her out when she was 17. Moore has also issued more half hearted denials and even outright justifications. In a Fox News interview last month with Sean Hannity, Moore said that he didn’t recall "dating any girl without the permission of her mother."
And this is the crux of the matter – Roy Moore, a man who has been accused by numerous women of sexual assault, and is allegedly known in his own stomping grounds as a sexual predator, should not, under any circumstances, be around children. And yet, he was somehow placed right across from a child early this week as part of a political ploy to drum up support for his candidacy.
On Sunday, Pro-Trump super PAC America First Project released a video of Moore sitting down for an interview with Millie March. March, in case you have never heard her name before, is a 12-year-old "conservative" that went viral for her heated support of Donald Trump and his wall.

We decided that we were going to bring Millie to Alabama, after everything that’s happened in this Alabama Senate race up until this point to show there is a wide range of people who support Roy Moore.

By "everything that’s happened in this Alabama Senate race up until this point," she is of course speaking of the allegations against Moore. The allegations he sexually assaulted girls – most of whom were only two to four years older than March. So then what happened?

Here's the thing. We understand politics is a dirty game. We understand that this year has been the nadir of basic human decency and even common courtesy. All that said, what we do not understand and cannot stomach is the propping up of a child in the name of political expediency.

March may be an excellent conservative. She may be well informed and understand all the issues – she may even be a political genius, for all we know – but that doesn't matter. What matters is the fact that she is a child – a 12-year-old child with limited life experience and understanding – and yet a group of adults decided to use her as thinly veiled ploy to humanize a man who has sexualized girls her age.
This is uncouth, it is beyond the pale, and it is quite frankly unacceptable by any barometer of social appropriateness. 2017 may have compromised our morals as a country, but it doesn't have to compromise our children too.