This 3-Year-Old Requested a Very Surprising Theme for Her Birthday Party, but Her Parents Delivered Anyway — Big Time | 22 Words 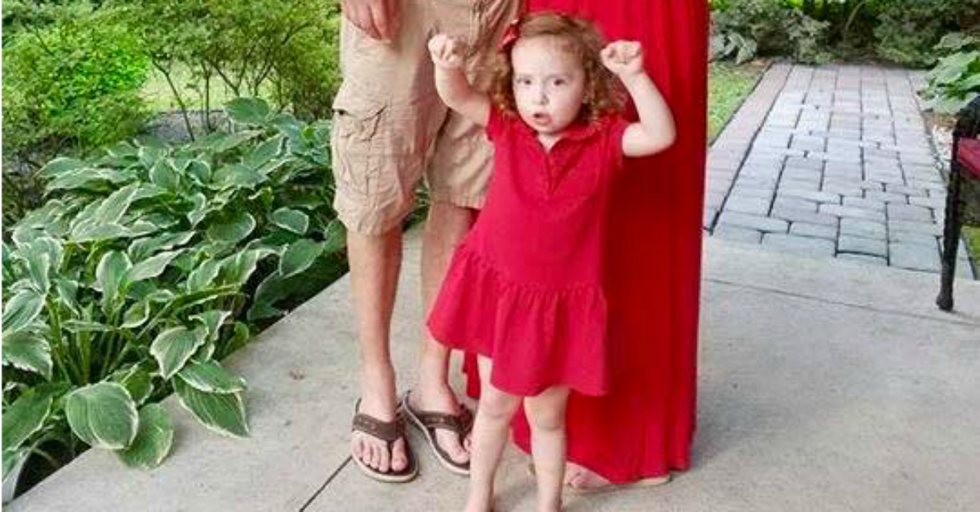 This 3-Year-Old Requested a Very Surprising Theme for Her Birthday Party, but Her Parents Delivered Anyway — Big Time

Parenting comes with a ton of heavy responsibilities, and also a lot of enormous joys. One of them is celebrating your little ones' birthdays. It's a lot of working getting a child out into the world, and that happiest of days is worth appreciating every single year.

It may seem like a non-issue to some, but parents tend to go the extra mile to make sure that their kiddo has a fun party they'll remember for a lifetime. One mom recently fulfilled her daughter's request for a not-so-conventional party, and the results were beyond adorable.

On the actual day of a child's birth, you're too tired to plan anything.

Yes, you absolutely adore your new baby, but on the day they make their big hospital debut, the only thing you feel is relief and exhaustion. Save the parties for later. Some food, binge-watching a TV show, and sleep are just what the doctor ordered. That newborn gets tons of snuggles, but the confetti and balloons can wait.

By the time the first birthday rolls around, expectations are high.

Grandparents, aunts, uncles, and even next-door neighbors want to know what you're doing for your baby's first birthday. It's a big event after all. You and the little one have survived together for an entire year, and that's something to celebrate. So, the pressure builds, especially if you've never thrown a kid's birthday party before. What to do?

Being the great parent you are, going all-out sounds like a great idea.

It's easy to get carried away with the first birthday party. Finding a solid theme is an all-consuming task. You nail every detail down and leave no Party City unturned. Bounce houses are rented. Magicians are hired. The cake that's three tiers high and an exact replica of Mickey Mouse? Yeah, you stayed up until 3 a.m. making that. Sure, the baby won't remember it, but you'll in the end, you'll have a sense of satisfaction and some pretty great photos. And your guests will go home with complimentary mouse ears.

What tends to happen, after the first birthday bash, is an overwhelming sensation of burnout. After decorating, baking, cleaning up after an army of family and friends, and mailing out a stack of thank-you cards, you might think, "Maybe we won't do it that way next year." Napping for a month sounds good.

Luckily, you get a year to recharge, and your kiddo starts to help with things. Sort of.

After another year passes, gone are the memories of how tired you were. Your beloved offspring is about to turn two, and they can now help with planning a theme. They do this by shouting things like, "Curious George!" or "Wiggles!" No, you're not inviting every person on the planet, and the cake is definitely getting ordered from somewhere, but you'll dip your toes back into party planning.

One mom recently went out on a limb and ran with an unconventional party idea.

Like any good mom, Emily Mascio consulted her soon-to-be-three-year-old daughter and asked what type of theme she wanted for her upcoming big birthday. Kids that age tend to have a very creative minds of their own. So when Mascio's daughter, Charlie, shared her answer to the b-day query, the curious momma was a little perplexed.

This cute little girl already had a "bullseye" in mind.

As it turns out, Charlie had her heart set on a "Target"-themed third birthday. Her mom was slightly incredulous at the idea. It was a little out of the norm, after all. Mascio says, "I laughed and was like, 'No, that’s not a party, why not Trolls?" But, after considering her sweet birthday girl's request for a bit, the amazing mom changed her mind. She says, "So, the more time went on I was like: 'You know what? It’s different...Let’s do it!'"

Why Target? Charlie has loved it from day one.

Target may seem like an odd party theme for a little kid to pick, but Charlie's mom explains, in a story on the page, Love What Matters, that her preemie baby developed a love for the superstore, when she was brand new. "When she was born, she was a 28 weeker and I was struggling with being cooped up inside. I would load her up and off to Target we'd go!"

Luckily, the interesting theme came with tons of creative ideas for pulling off an amazing party.

Once Mascio committed to it, she went to work creating an impressive spread. "I made Target symbols to hang around and then got balloon letters to spell Target and Café. With the café, we did all foods that you can get like popcorn, Pizza Hut and hot dogs on a roller. For dessert, I made her Target cake and then just made chocolate covered pretzels and Oreos—obviously in red and white!" Adorable and delicious? We think so.

What's a party without fun favors? This quick mom had that part all figured out.

One of the best (and cutest) parts about the Target party Mascio put together? The all-important party favors. These were practically built into the overall theme, and put the bash over the top. She says, "Then for party favors, we did a 'Dollar Spot.' I had a toy bin with bulk items and our local Target was so nice to give us checkout bags and stickers for the kids."

It sounds like the birthday girl had an absolutely wonderful day.

Mascio's effort wasn't wasted. Of Charlie's reaction to the fully set-up birthday party, she says, "She woke up from her nap when everything was decorated and she was just in awe. She yelled, 'Yayyy! Target!'" In our opinion, this mom went the extra mile for her three-year-old's special day, and the happiness on her little girl's face definitely shows. Here's to many more happy birthdays in the future. We know this mom will deliver.