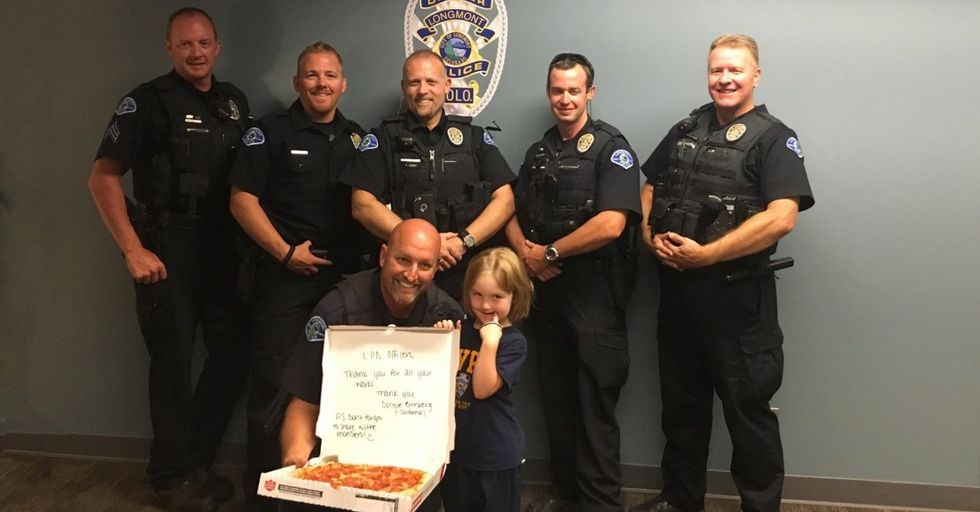 When was the last time you emptied your piggy bank for someone else? Sometimes it takes a child to remind us what's important in this world. Children tend to be more kindhearted, generous, and willing to help others than their grown-up counterparts. Grab a tissue and read on about the most adorable superfan of the Longmont, Colorado police department and her big, generous heart.

Sidney Fahrenbruch, age 4, is a big fan of her local police department in Longmont.

Together they made national news in July when she asked Officer Bonday to help her clear her new house of monsters. She had met the officer at a local community picnic, and he agreed to help with her monster problem. Bonday went to the youngster's home and systematically helped her check in cupboards, under cushions, and anywhere else unwanted monsters might be lurking. The pair cleared each room and were ultimately able to declare the house monster-free. Since then, Sidney's continued her relationship with the PD by dropping off water to officers working outside on hot summer days, and bringing pizza, snacks, and good cheer to the station on a weekly basis.

When Sidney heard that the department was raising money to help one of their own pay for cancer treatments, she knew just what to do.

Officer Kyle Zulauf, Army veteran and father of three young children, is undergoing treatment for pancreatic cancer. The Longmont Fraternal Order of Police Lodge 6 is organizing fundraisers to help pay for Zulauf's medical expenses. Megan Fahrenbruch, Sidney's mother, explains what happened when Sidney heard about the fundraisers, "She said, 'Oh I know him.' And I said 'Yes, you know him.' And she said, 'I want to give him some of my piggy bank money.' And she wrote a card and got the money out. She loves the police officers."

Sidney had already given half of her life savings to a fundraiser at her school when she decided to give the rest to the police department.

She'd been saving up for a toy, but immediately changed course when she heard about Officer Zulauf's cancer. The remaining contents of her piggy bank included $9 and a bag of change. A veritable fortune to a four-year-old.

Sidney brought her money to the station and presented it to Officer Bonday.

Sidney explains why she chose to open up her piggy bank for Officer Zulauf, "To help people who has (sic) cancer because that's nice." "For a four-year-old that can step up and say at four, 'I understand cancer is a bad thing and being nice is a good thing and I want to do my part to help out.' It's just super special," said Officer Bonday.

This little girl represents what all children instinctively know: people should help others when they're able to.

Sydney's $9-and-change contribution might not make a huge dent in Zulauf's medical expenses, but her generosity, kindness, and love will undoubtedly make a huge impact. This loyal and adorable weekly visitor to the police station must lift the spirits of the men and women of the Longmont PD, and make it that much easier for them to go out and do their jobs. Well done, Sidney, and a huge congratulations to her family for raising such a special little girl! Officer Zulauf has a hard road in front of him, but a fierce support network behind him. We wish him and his family all the best.