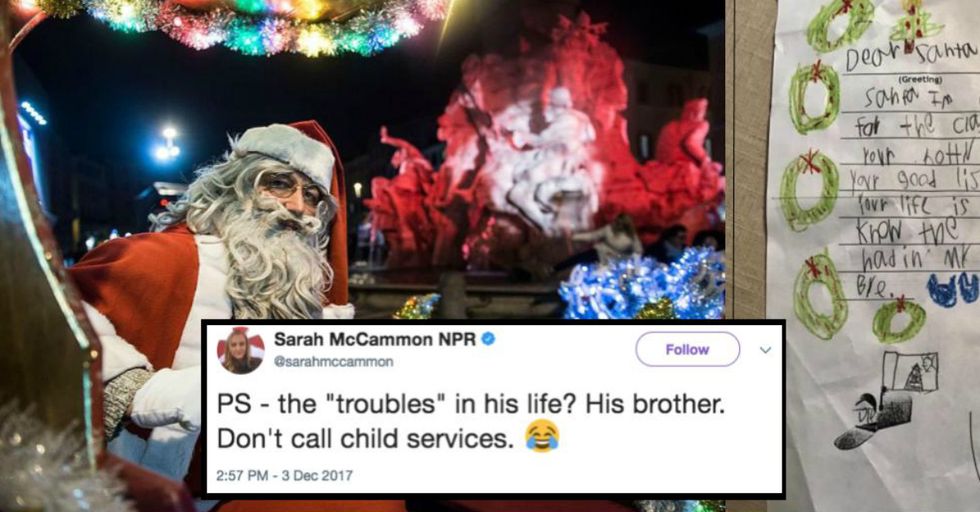 It's that time of year again! Kids everywhere are writing letters to Santa and anxiously awaiting his arrival in a few weeks. Will they make the good list? Will he bring them exactly what they hoped for? The excitement is palpable. But not for all kids.

For most 6-year-olds, this is a pretty exciting time of year.

And why not? A magical guy who knows how good they've been has spent all year thinking about what toys and gifts they'd want. And he comes flying in on his magical sleigh and brings a bounty of goodies with him. What's not to love? Well, some kids are just not that into it. Apparently.

"Santa I'm only doing this for the class. I know your notty list is emty. And your good list is emty. and your life is emty. You dont know the trouble Ive had in my life. Good bye. love Im not telling you my name"

What trouble has this tiny tot seen in his life?

He has a brother. Enough said. That does sound like a lot of trouble. No wonder he thinks Santa's life is so empty.

There's no denying the kid has a flair for drama.

This kid's sadness and cynicism have the people of Twitter rolling. This letter is definitely a keeper. You've got to think that this kid is a challenge to parent. All the other parents are hiding elves and leaving carrots out for flying reindeer, and this mom has this to contend with.

As many letters to Santa undoubtedly are, this one is covered with adorable, seasonal artwork.

Wreaths and skulls. Of course. This kid's brother must really be a piece of work! My favorite part is that he doesn't leave his name. Either Santa isn't worth his time, or he's leaving the door open a crack juuuuuuust in case those lists are real.

His precocious tone reminds us of other Christmas greats.

How about a holiday movie based on this letter? We could easily curl up with a cup of cocoa and settle in for 90 minutes of this kid. We want to know his thoughts on Valentine's Day. On the Tooth Fairy. Please, kid, tell us more!

Of course, not all Twitter users found his letter funny.

A handful of responders are worried about the boy. They question the mother, naturally, and are concerned about the child's mental health. How kind of them.

But others quickly came to the kid's defense.

If you've spent any time with the 6-year-old crowd, you know that they're all different, all weird, and often say crazy things. Their brains are still ruled by mostly irrational thoughts and ideas, but suddenly they have the words and knowhow to put those ideas into writing. And it's awesome.

Let's face it, it hasn't been a great year. We don't know what troubles this kid's brother has caused him, but who among us hasn't struggled with the emptiness of it all this past year? Is Santa a lie? Who cares? Truth doesn't matter. Nothing does.

This kid's letter is all of us.

Hopefully Santa will rouse himself from his empty life and get this kid some great new toys. He needs them. And for us? We hope Sarah McCammon shares more of her son's school projects.