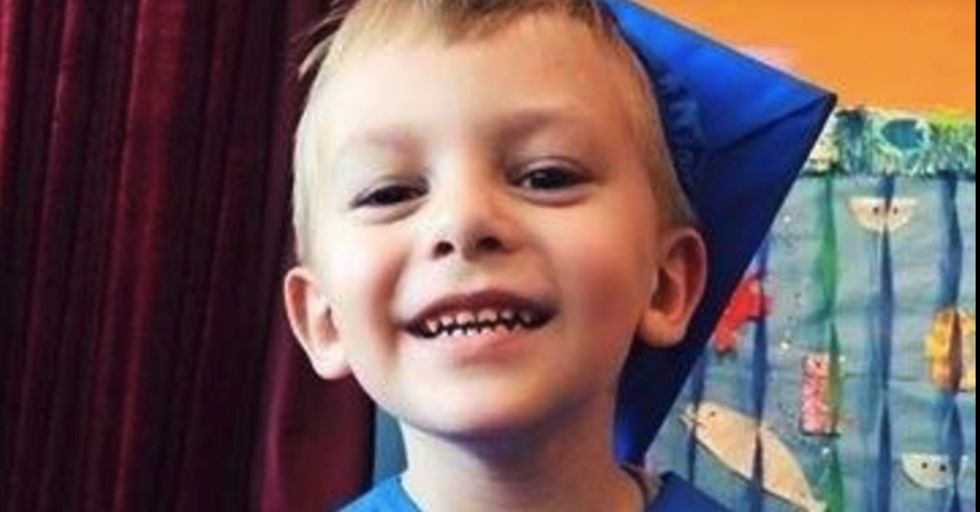 Family Receives Overwhelming Outpouring of Support for 7-Year-Old With Brain Cancer, and Thousands of Halloween Cards

You might as well grab your tissues now. We'll wait ... all set?

This is a story about a little boy, a terrible cancer, and the kindness of literally thousands upon thousands of strangers. You might need a whole box of those tissues.

This is Brock Chadwick, a 7-year-old from Maine who is undergoing treatment for a rare type of brain cancer.

His parents brought him to the doctor thinking he had the flu. Things quickly spiraled into any parent's worst nightmare and within days Brock was undergoing surgery to remove a tumor from his brain. The cancer had spread, though, and he has been receiving radiation therapy.

Brock loves Halloween, and in an effort to cheer him up, his great-aunt came up with an idea.

Hoping to get some Halloween cards from far-flung friends, family, and acquaintances, she posted the request to Facebook. The response has been staggering. People from all over the world have taken the time to send Brock Halloween cards. And that's not all.

The request has been shared tens of thousands of times. The result has been an overwhelming outpouring of cards, support, love, gifts, and even a group of Harley-riding bikers parading by.

The family never expected this kind of response.

Moved by the magnitude of it, they've been sharing photos of the cards to their Team Brock Facebook page. It's not just a few dozen cards. Not even a few hundred.

When people show up for a kid with cancer, they SHOW UP. It's a testament to all the good we can do when we come together. The news lately is filled with disaster, divisiveness, and division. But the truth is, people were willing to rally to cheer up a little boy in Maine. The kindness and generosity of strangers didn't end there.

As a 7-year-old, what could be better than having the local fire department show up at your house to deck it out to the max for Halloween?

The Biddeford FD surprised the family as they pulled up with sirens blazing. The community has rallied around Brock and his family in a big way. The boy who loves Halloween is now living in the most tricked-out house in the neighborhood.

Truly, the volume of cards and gifts is astonishing.

Brock's family is dealing with the very worst situation imaginable. The campaign originally started to bring a bit of cheer to a sick little boy, and hopefully, it's providing some comfort to all of them. We may not be able to make Brock better, but we can give him the most amazing Halloween ever.

It's impossible to thank each person individually, but the family is trying.

By posting photos of hundreds of cards, videos of the community coming together, and snapshots of the sheer volume of letters and packages, the family is doing its level best to show how much they appreciate all the support. As the story continues to spread online, the Chadwicks can expect this to go on for quite awhile longer. We wish Brock and his family all the best and hope they have a truly magical Halloween.