This 74-Year-Old Man Is Going the Extra Mile to Get His Sick Wife a Kidney... Quite Literally | 22 Words 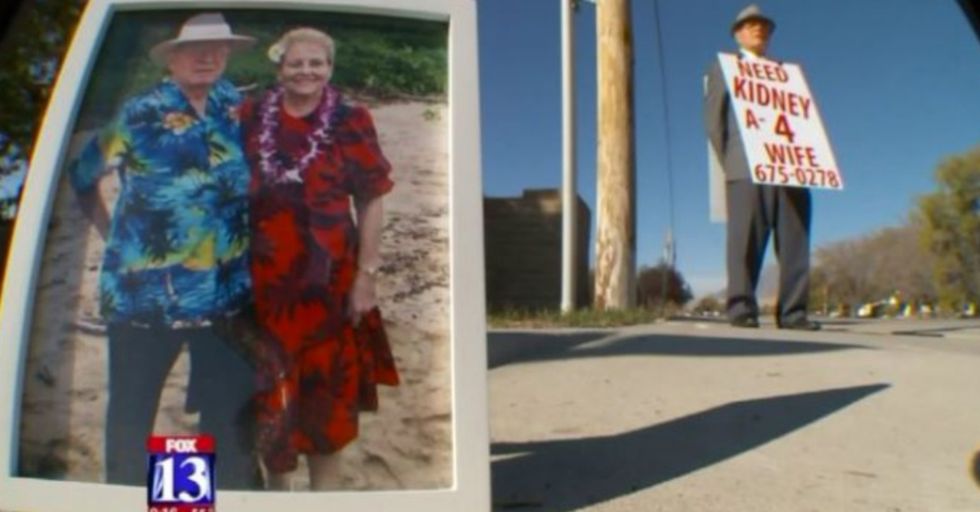 This 74-Year-Old Man Is Going the Extra Mile to Get His Sick Wife a Kidney... Quite Literally

What would you do if the love of your life was in desperate need of a kidney transplant? While most might feel completely powerless in that situation, one Utah man chose to take action in the only way he knew how.

This amazing story of love and unwavering commitment will restore your faith in humanity.

Wayne and Deanne Winters are residents of Farr West, Utah.

They've been together 26 years, and Wayne is willing to do whatever it takes to give his wife a long and happy life... ...even if it seems a little crazy.

“She’s on dialysis and she doesn’t like it. It’s horrible," Wayne told local news station KSTU-TV. “This is the worst I’ve ever seen her. She don’t look good."

After growing increasingly worried about Deanne's health, Wayne knew he had to do something.

He became obsessed with finding her a kidney match. The first step in his search was looking for help online, where he discovered something that made a profound impact on him.

It was a story of a man named Larry Swilling from South Carolina.

Swilling, who was concerned with his own wife's depleting health, began carrying a sign around town advertising the need for a kidney match. The idea ended up paying off — Swilling's wife Jimmie Sue underwent a life-saving kidney transplant in 2013.

Inspired by Swilling, Wayne immediately went to work constructing a sandwich board with a concise plea.

"NEED KIDNEY 4 WIFE," the sign reads, along with his phone number and Deanne's "A-" blood type. Wayne, at age 74, dons the sandwich board and strolls up and down the streets of Farr West in the hopes of finding someone generous enough to donate an organ to a complete stranger. "They're slowed down. They can look at my sign — they can't go home in a hurry," said Wayne, explaining why he prefers to walk during rush hour.

He describes the response so far as "overwhelming," “Look at this road, how busy it is from 3 to 6 o'clock; it’s just like this. I don't know which way to face, so I just walk up and down," he said.

On the first day of walking, a man stopped him to ask about the sign.

After explaining the situation, the man told Wayne that he would check to see if he would be a match. “I say ‘Deanne, I think we have a good chance of getting you a kidney,’" Wayne told Fox 13 Now.

Wayne expressed his profound desire to get his wife back to who she was before her illness.

“After I get a kidney, I will have my wife back the way she was — normal, helping people, loving people," he told Fox 13 Now. “She likes to serve other people."

Some residents stop just to give Wayne a quick hug or share some words of encouragement.

"It'll happen for you," one woman says after a quick peck on the cheek. "I've gotta do something," Wayne says. "She's just miserable from that dialysis."

Deanne has remained positive that a good samaritan will come through for her.

She told KSL Broadcasting that she has “hope and faith" that a kidney match will be found somehow. “I have a lot of living left to do," she added.

Watch the full story below.

Think you might be a match? Get more info on kidney donation at the website of the National Kidney Foundation. This number was provided by KSTU-TV for those wanting to help Wayne and Deanne: 801-675-0278.